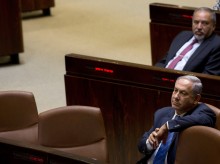 JERUSALEM (AP) — Israel was in an unprecedented political impasse Tuesday as parliament pressed forward with legislation to dissolve itself in a high-stakes showdown that could lead to another snap election.

Prime Minister Benjamin Netanyahu had appeared to have secured a fresh mandate to rule after last month’s election, with a clear path to build a coalition government with his traditional political partners.

But a shocking crisis with his longtime ally and erstwhile rival Avigdor Lieberman has thrust the country into uncharted territory.

Netanyahu has until late Wednesday to present his new coalition or else Israel’s largely ceremonial president can task someone else with the job. But the prime minister seems to have no intention of letting that happen and is threatening another election instead.

Backed by Netanyahu, the first of three motions required to dissolve parliament passed early Tuesday with a 66-44 majority, and a tentative election date was set for Sept. 17.

Negotiations are expected to continue right up till the final deadline. But if no compromise is found, Israel will likely go to elections for the second time this year — something that has never happened before.

Though Netanyahu’s Likud party increased its power to 35 seats in parliament in the Apr. 9 vote, it cannot muster a 61-seat majority without Lieberman’s Yisrael Beiteinu party.

The Likud has assailed Lieberman in recent days for undermining the people’s will of a right-wing government and accused him of acting out of personal spite for Netanyahu. The prime minister himself said Lieberman would be fully responsible for dragging the country to an “expensive, wasteful” election and his people have vowed to aggressively go after Lieberman’s core supporters in response.

But the mercurial Lieberman seems to be holding his ground.

“The only motivation of Yisrael Beiteinu is to stand by our principles and our commitments,” he said in a Facebook post. “We are not looking to topple Netanyahu and are not looking for an alternative candidate, but we will not compromise.”

The crisis ostensibly revolves around Lieberman’s insistence that current legislation mandating that young ultra-Orthodox men be drafted into the military, like most other Jewish males, run its course.

Ultra-Orthodox parties consider conscription a taboo, fearing that military service will lead to immersion in secularism. They insist that years of exemptions that have generated widespread resentment among the rest of Jewish Israelis remain in place.

A stalemate on the issue was one of the factors that shortened the term of the previous coalition government, but the assumption was that a creative compromise would be found this time around. Instead, Netanyahu finds himself on the precipice of having to call new elections that could once again put his lengthy rule in peril.

The crisis shines a spotlight on the 60-year-old Lieberman, one of the most influential and unpredictable politicians in Israel. The tough-talking, Moldovan-born Lieberman started out as a top aide to Netanyahu during his first term in office in the 1990s before embarking on a political career of his own. Since then, he has known his ups and downs with his former boss in stints in various ministries, including as foreign minister and defense minister.

A staunch nationalist, he has faced long-standing accusations of racism for branding Arab lawmakers as enemies of the state and advocating for population swaps in a future peace deal that would leave many Arab citizens outside Israel’s borders.

But Lieberman, who still speaks in a thick, monotonous Russian accent, also champions a secular agenda aimed toward his political base of immigrants from the former Soviet Union and has pledged to confront efforts of ultra-Orthodox parties to coerce religion on a secular majority.

And despite his fiery rhetoric and strongman persona, he has shown signs of pragmatism such as once suggesting he’d be willing to dismantle his own West Bank settlement if Israel’s final borders were redrawn. Mostly he has emerged as an iconoclast in a right-wing bloc that has largely blindly bent to the will of Netanyahu in recent years. It’s made him an unlikely savior in the eyes of some anti-Netanyahu forces.

“He is insisting on a matter of principle. True, we look at the spectacle and can scarcely believe it,” said Ben-Dror Yemini, a columnist for the Yediot Ahronot daily, which is highly critical of Netanyahu. “Lieberman’s very act of abiding by the principles with which he is identified is a refreshing change in the political scene.”