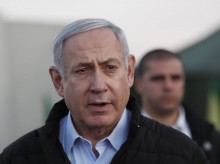 Israeli Prime Minister Benjamin Netanyahu visits an Israeli army base in the Golan Heights, on the Israeli-Syrian border. (Atef Safadi/Pool via AP)

JERUSALEM (AP) — Prime Minister Benjamin Netanyahu looked to project business as usual Sunday as he returned to work following his indictment on corruption charges, but a wall of silence from his usually loyal Cabinet ministers could mean tough times ahead for the embattled Israeli leader.

Netanyahu is determined to fight the charges from the prime minister’s office in what promises to be a lengthy court battle. But long before the proceedings begin, it could be his own Likud party that decides his political future as the country appears to be heading toward new elections.

A show of support from his Cabinet would give Netanyahu a boost as he tries to rally the party and public behind him. Netanyahu’s efforts so far, however, appear to be falling short.

“There isn’t a single person who thinks that after a third or fourth or fifth or sixth election, Netanyahu will succeed in forming a government,” Saar told Channel 12 TV on Saturday. “There is only one way that we can save the country, get it out of this crisis and maintain the rule of Likud, if today we go to a snap primary election.”

The open call is a risky maneuver in a party that fiercely values loyalty and has had only four leaders in its 70-plus-year history.

But perhaps influenced by polls showing a majority of Israelis thinking Netanyahu should step down, the party’s most senior ministers pointedly remained mum. Foreign Minister Israel Katz, Internal Security Minister Gilad Erdan and Knesset Speaker Yuli Edelstein, among others, are all straddling the sidelines as Netanyahu clings to power.

With just 18 days to go to either form a new government or trigger new elections, pressure will surely be mounting on these and other officials to show their hand.

“Gideon Saar yesterday salvaged the dignity of a party that was once great, stormy, free and democratic,” wrote Maariv columnist Ben Caspit. “Nearly all of the top Likud officials agree with Saar. They agree, but tremble in fear. They’re heroes behind closed doors.”

Netanyahu made no mention of his indictment during Sunday’s Cabinet meeting, talking about Iran, threats from Gaza and domestic affairs.

Later on Sunday, he traveled to Israel’s northern frontier to tour the Golan Heights with military officials. Netanyahu issued fresh warnings to archenemy Iran against entrenchment in neighboring Syria.

“We will also act to thwart Iran’s attempts to turn Iraq and Yemen into bases for launching rockets and missiles against the state of Israel,” Netanyahu said.

The attorney general’s decision to indict Netanyahu on fraud, breach of trust and bribery charges Thursday shook up Israel’s political system, which is in paralysis after inconclusive elections in April and September. It is the first time a sitting prime minister has been charged with a crime.

With neither Netanyahu nor his main rival, former military chief Benny Gantz, able to secure a parliamentary majority, the country seems to be barreling toward its third election in under 12 months.

Most observers believe a unity government between their parties, which together control a majority of seats in parliament, is the best way out of the crisis. But the main obstacle to that has been Netanyahu himself. Gantz and his partners have ruled out a power-sharing rotation with an indicted prime minister and urged Likud to choose a different leader.

Unlike mayors or regular ministers, the prime minister is not explicitly required by Israeli law to resign if indicted and Netanyahu is steadfastly vowing to remain in office.

So the only practical way to unseat him would be if he were ousted from within, a scenario that until recently was unthinkable.

Netanyahu, the longest serving leader in Israeli history, is desperate to remain in office as he faces indictment since it affords him a preferable legal defense. He’s angrily lashed out at police and prosecutors, accusing them of staging “an attempted coup,” and bemoaning a crooked system that he says is out to get him.

As the party’s most popular politician, Netanyahu has enjoyed the unquestioning backing of both Likud’s top officials and its rank-and-file members. But if he becomes an electoral liability that loyalty could begin to fray.

A poll commissioned by Channel 13 News after the attorney general’s decision showed that 56% of the public thinks Netanyahu should resign and only 35% said they think he can keep serving. The poll, which surveyed 750 people and had a margin of error of 4 percentage points, also showed Gantz’s Blue and White party extending its lead over Likud.

The parties don’t appear to have significant ideological gaps and a leader other than Netanyahu would seemingly have a relatively easy time establishing a power-sharing agreement.

Netanyahu’s supporters accuse his opponents of trying to topple their leader through undemocratic means.

“Netanyahu is now fighting for his life and personal liberty but, no less so, is voicing the cry on behalf of many members of his camp,” wrote Matti Tuchfeld, in the pro-Netanyahu Israel Hayom daily. “The smugness of the journalists in the television studios … about to celebrate Netanyahu’s downfall by means other than the ballot boxes drive Likud supporters out of their minds.”