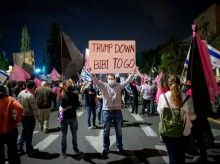 Israeli politics are moving in the opposite direction to America: the demographics play to the right. A Biden-style victory could simply never happen here. Op-ed published in Haaretz.

With Israel seemingly headed toward another election, many long-languishing opposition forces are hoping that Joe Biden’s victory over Donald Trump in the United States can be a harbinger of the Israeli version of a moderate overcoming an extremist incumbent.

For all the similarities between Trump and Benjamin Netanyahu, from their trampling of norms to their assault on the media and law enforcement agencies to their shared disdain for elites and even for simple truths, there is one major difference. Trump, even with his cult-like base, could never come close to representing most of his country’s people. Netanyahu can.

For all the falsehoods Netanyahu has peddled in his frantic campaign to stay in power, he’s been right about one thing: when he says his opponents are counting on the courts to remove him from office, because they can’t do it through the ballot box, he’s not lying.

This is not to say that his alleged corruption should not disqualify him from serving, or that he has not lost the moral standing to do so. It’s just that for those who want to vote him out, the numbers simply don’t add up.

The fact is the Israel of today is a right-wing country, and Netanyahu stands head-and-shoulders above everyone else in his camp. Opinion polls show that, today, less than a fifth of Israelis identify as being on the left, with a quarter calling themselves centrists, but a huge 57 percent identifying as right-wing.

With Palestinian peace talks long off the agenda and a socialist economy a relic of the past, the left hasn’t got much left to sell besides a nostalgic craving for its glorious history. The days of the fiercely-fought right vs left ideological battles between Menachem Begin and David Ben-Gurion, and Yitzhak Shamir and Shimon Peres, are over. The Labor Party that established the country and led it through its first three decades has all but evaporated.

Without the ideological rivalries of the past to stand upon, the Israeli political map has largely aligned neatly along identity lines, with the ultra-Orthodox, nationalist settlers and working-class Mizrahi periphery on one side and the wealthier, mostly Ashkenazi, educated class of the Tel Aviv metropolis on the other. The main points of contention tend to revolve less around policy and more around decorum, tradition and grievances.

In recent years, this schism has mostly boiled down to a referendum over its most obvious manifestation: Netanyahu himself.

The Ashkenazi, MIT-educated historian’s son has somehow come to represent Israel’s downtrodden, who feel aggrieved by what they perceive to be a crusade of the elite institutions of the state against him.

Like Trump, Netanyahu has his die-hard, unconditional supporters, and he maintains a stranglehold on his party apparatus. And, again like followers of the outgoing American president, even many of those most harmed by his leadership admire his strongman persona, and fear handing the reins over to anyone else who could potentially cave into enemies, real and imagined, both from without and within.

It took a group of three admired former military chiefs three tries to rally the sizable anti-Netanyahu camp to three unfulfilling ties with Netanyahu’s bloc. The emergence of Naftali Bennett as a right-wing alternative has raised, for some, a different hope of renewal after nearly 12 years of consecutive Netanyahu rule.

But despite the country’s sizable centrist camp, it’s hard to see anyone to the left of Netanyahu reclaiming the premiership anytime soon. Neither ex-military chief Gadi Eisenkot nor Tel Aviv Mayor Ron Huldai appear to be the latest longed-for saviors that many hoped Benny Gantz and Gabi Ashkenazi would turn out to be.

In fact, it would take a perfect storm for the ideologically murky parties of Gantz, Yair Lapid and Avigdor Lieberman to cobble together enough mandates for a makeshift alliance with Bennett and others that could potentially freeze out Netanyahu. Such a scenario would seem to require the type of fluke that allowed Trump to sneak into the presidency in 2016, even though he earned nearly three million fewer votes than did Hillary Clinton.

In many ways, Israeli politics are moving in the opposite direction of what’s happening in America.

For a Republican like Trump to become president these days, he must rely on a disproportionate electoral college, gerrymandered voting districts and questionable voter suppression tactics. Even so, the Republican candidate for president has won the nationwide popular vote just once in the past eight elections. The trend looks to continue as Democratic-leaning minorities grow into a larger share of the population.

In Israel, on the other hand, the demographics play to the right. Israel’s fastest growing sector, ultra-Orthodox Jews, have been Netanyahu’s most loyal coalition partners. Even if they were to somehow break with him, it’s hard to imagine them ever siding with the egalitarian, gay-friendly zeitgeist of the liberal left or the secular sentiments of most of the anti-Netanyahu crowd.

It’s true that ultra-Orthodox parties have sat in governments led by Rabin and Ehud Barak, but that was back in the 1990s. They are different parties today with an electorate that has shifted to the right. Regardless, Netanyahu, ever the masterful politician, has figured out what they want and gives it to them.

With the Arab-led parties still seemingly rejected as coalition partners and wary of formally aligning with any of the Zionist parties, the center-left has virtually no chance of winning a parliamentary majority.

In other words, those taking to the street in the U.S. against Trump represent the future. In Israel, those protesting Netanyahu are the past. At least we can take comfort that in Israel’s democracy, the people generally get what they vote for.