What is the fourth industrial revolution? By Aron Heller | Nokia, Wednesday, 02 Dec 2020 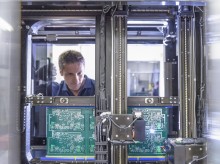 It’s the buzzword de jour of our rapid technological advancement. But what exactly is the fourth industrial revolution and how is it truly revolutionary?

For starters, your job may disappear, your city could be transformed, technology will mesh with your body and the current lightning speed of innovation you are experiencing will just get faster.

The bombastic phrase itself was first introduced in 2015 by Klaus Schwab, chairman of the World Economic Forum, in a ground-breaking article in Foreign Affairs. It predicted an increasingly interconnected and automated future marked by dramatic advances in robotics, artificial intelligence, biotechnology, 5G networks and the Internet of Things.

To give the scope of this change historical perspective, Schwab framed the concept upon the foundations of the previous revolutions that fundamentally changed societies and the way we live.

The original industrial revolution beginning in the late 18th century largely replaced hand labor with mechanized production using water and steam power that created factories and the textile industry. A century later, the second, known as the Technological Revolution, used steel, oil and electric power together with railroad and telegraph networks to create mass production, including the modern production line.

The third, known as the Digital Revolution, saw the emergence of computers, the internet and the use of electronics to automate production in the late 20th century. Now the fourth builds upon it, with a fusion of technologies that until recently seemed imaginary, and looks to transform entire systems of production, management and governance.

But this version is far more than just merely another evolutionary phase since it blurs the boundaries between the digital, physical and biological worlds with products like voice-activated assistants, face ID recognition and wearable technologies.

Also, it is happening a lot faster. As Nokia Software President Bhaskar Gorti explained in a recent address, the reason is that the changes we are experiencing now are happening at an exponential, rather than linear, pace.

Gorti likened it to the old legend of the inventor of chess who asked the emperor of India for one grain of rice for the first square of the chessboard, two grains for the next square, four for the next, and so on for all 64 squares. What had initially seemed like a humble request quickly turned into an astronomical sum.

Borrowing from Moore’s Law, an observation that the number of transistors in a dense integrated system doubles about every two years, Gorti noted that there have already been 38 periods of doubling since IT started being tracked in 1958.

“By that calculation we entered the second half of the chess board in 2006. Just think about what we’ve seen since then. We’ve seen the introduction of smart phones, tablets, AI, machine learning, digital platforms, automation, self-driving cars and more,” he said. “If you take anything away from this story it is the pace will never be this slow again.”

Like the previous revolutions, this iteration offers the potential to raise global income levels and improve quality of life.

But it also threatens to create far greater inequality and disrupt labor markets, as entrepreneur Andrew Yang ominously warned in this year’s Democratic presidential primary campaign. With robots poised to replace menial jobs, the danger is of a winner-takes-all economy in which high-skilled workers get rich and the rest are left behind. Automation looks to eliminate the jobs in which computers outperform humans, so whether you are a business analyst, translator or cashier there is much to worry about from a computer who can do your job faster, cheaper and better.

On the other hand, these technological advances, often also referred to as Industry 4.0, are expected to create a productivity jump of up to 35% and lay the groundwork for “smart cities” that improve commuting and air quality. It could also create groundbreaking digital health care, provide education to remote parts of the world and help mitigate climate change. For individuals, it offers convenience in the form of allowing us to remotely order cabs, purchase products, play games and watch movies.

Speaking of films, the flip side of computers becoming so intelligent also raises fears of a dystopian Terminator-like future in which computers take over and our humanity is compromised.

Schwab himself warned that the technology “doesn’t change what we are doing, but it changes us.” In his seminal essay, he said our common future will ultimately come down to people and values.

“In its most pessimistic, dehumanized form, the Fourth Industrial Revolution may indeed have the potential to ‘robotize’ humanity and thus to deprive us of our heart and soul,” he wrote. “But as a complement to the best parts of human nature – creativity, empathy, stewardship – it can also lift humanity into a new collective and moral consciousness based on a shared sense of destiny.”

“The Fourth Industrial Revolution is upon us. As are a multitude of pivotal challenges and opportunities,” he wrote in a September blog marking a month into his new post. “How we respond to them will define our communities, our economies, even our very planet.”