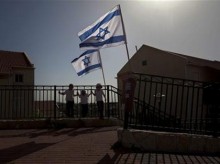 Israeli flags fly over the Ulpana neighborhood in the West Bank settlement of Beit El near Ramallah (AP Photo/Sebastian Scheiner,

After squeezing Prime Minister Benjamin Netanyahu in coalition negotiations, the pro-settler Jewish Home party has gained control over several powerful government ministries — putting it in position to push forward with an agenda that includes nationalist school studies, money for settlement construction and an assault on a judiciary it believes to be too liberal. This ambitious plan seems sure to raise tensions at home and speed up a seemingly inevitable clash with the international community, which is still eager to promote the establishment of a Palestinian state.

In his previous governments, Netanyahu generally included more moderate voices and has at least paid lip service to peace efforts with the Palestinians. But the current government is dominated by hard-liners who reject territorial concessions to the Palestinians, and with a slim 61-seat majority in the 120-seat parliament, Netanyahu is heavily dependent on both the Jewish Home and settler advocates within his own Likud Party.

Some mystery shrouds the question of what the settlers might have been promised.

But among the settlers themselves, there is widespread expectation that the government will remove restraints on construction and push for aggressive expansion, said Yigal Dilmoni, the spokesman for the Yesha Council, an umbrella settler lobby.

“There is a pretty permanent reality in Judea and Samaria, one that is almost irreversible,” he said, referring to the West Bank by the biblical names favored by nationalist Israelis. “We are optimistic but not power drunk. … We are not looking to fight, but the world cannot dictate something that Israeli democracy voted against.”

More than 350,000 Israelis live in the West Bank and 200,000 more in east Jerusalem — alongside more than 2 million Palestinians who, unlike the settlers, cannot vote in Israeli elections. The Palestinians want these areas — captured by Israel in the 1967 Mideast war — included in their future state, and say the ever-growing population of settlers could make it impossible to divide the territory. The international community regularly denounces Israeli settlement of occupied lands as illegal or illegitimate.

In recent days, U.S. President Barack Obama has reiterated that he expects the new government to work toward a two-state solution, and European leaders have hinted at taking a harder line against Israel over settlements.

Dani Dayan, another Yesha official, said Netanyahu will have to navigate between these opposing agendas. “At the end of day in Israel the prime minister has most of the power and it is he who will have to decide which path to follow,” he said.

Dore Gold, a confidant and unofficial adviser to Netanyahu, played down the settler influence, saying the international community was well aware that Netanyahu calls the shots and has proved in the past his abilities to cut deals with Israel’s neighbors.

“It’s not as though there is a diplomatic opportunity out there that only the Israeli government is refusing to embrace,” he said. “We are not in a situation where the Palestinians are eager to negotiate.”

The new government’s official guidelines mention the pursuit of a diplomatic process that will aim for a “peace agreement with the Palestinians and all our neighbors.”

Netanyahu’s other partners — including two ultra-Orthodox parties and the centrist Kulanu — also have the ability to bring down the coalition. But with their interests focused on internal affairs, it is the Jewish Home that seems most likely to challenge the prime minister.

Bennett, a former aide who has a rocky relationship with Netanyahu, is slated to become education minister, where he’ll be able to promote his religious and nationalistic viewpoint in schools.

Uri Ariel, a driving force behind settlement construction in the previous government, will become agriculture minister, where he can help West Bank farmers and take control of a murky agency that has historically served as a conduit for transferring funds to settlements. Another party representative will become deputy defense minister, a post with influence over West Bank issues.

Hagit Ofran of the Israeli anti-settlement group Peace Now accused Netanyahu of giving “extremist advocates of the settlers … a big part of the control over the settlement policy.”

The most scrutinized appointment is that of the 39-year-old Ayelet Shaked as justice minister, an influential post typically filled by a person with particular political or professional prestige.

Pugnacious and unapologetic, Shaked has no legal experience and has been an outspoken critic of the country’s judiciary, widely seen as a liberal bastion. She could influence appointment of judges and has championed bills that critics say are meant to stifle dovish groups.

Last year, she drew international attention for posting on Facebook a decade-old article written by a settler author that referred to Palestinian children as “little snakes” and appeared to justify the mass punishment of Palestinians living under Israeli occupation.

Nachman Shai, an opposition lawmaker from the Zionist Union, said giving Shaked the Justice Ministry was “like appointing a pyromaniac to head the fire department.”

Netanyahu only grudgingly agreed to the posting. Shaked once worked as Netanyahu’s office director before leaving together with Bennett, reportedly because of conflicts with Netanyahu’s domineering wife Sara. A secular mother of two, she helped woo voters from outside the party’s traditional religious base.

The telegenic Shaked has also drawn attention because of her appearance. Yosef Paritzky, a former Cabinet minister, wrote on Facebook that “this is the first time that the state of Israel will have a justice minister who could be a pinup girl on a calendar in a garage.” Female politicians from across the spectrum have rushed to defend her from sexist remarks.

For her part, Shaked has toned down her rhetoric of late and complimented the country’s supreme court justices. She turned down repeated Associated Press interview requests.

Political commentator Amnon Abramovitch said the focus on Shaked distracted from the real issue: “Bennett has Netanyahu by the throat and can take him down any time he pleases. It’s a government that will be exposed to perpetual extortion by the settlers.”