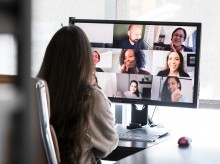 One of the biggest impacts of the Covid-19 pandemic has been the migration to remote working.

This monumental disruption has forced us to adapt to new ways of learning, shopping, dining and communicating. But for many people, the most dramatic change has been the blurring of boundaries between the personal and the professional. Specifically, it has come in a sudden stop to the most basic of daily routines: leaving the house and going to the office. It’s no surprise that WFH (short for work from home) was chosen as one of Oxford Dictionary’s words of the year for 2020.

As the world continues to adapt in 2021, tech companies have been grappling to define a new normal. Twitter’s Jack Dorsey has said that his employees could potentially “work from home forever,” while Google has required employees to apply for permission to primarily work remotely.

A consensus appears to be coalescing somewhere in the middle around some form or another of a hybrid workplace that seeks to combine the upsides of both models.

Nokia has been no exception. Its more than 90,000 employees across 130 countries have all experienced various degrees of uncertainty and changes to their working lives. About 26,000 chimed in with their input to a company-wide survey that helped influence the company’s new guidelines. These aim to increase choice for employees, allowing them to work remotely up to three days a week starting in 2022. In doing so, the company is strengthening its existing flexible working practices, rethinking office spaces and investing in technology that will enable the kind of collaboration required in the age of Covid-19.

“The pandemic forced organizations to change. Technology gave people the tools to innovate,” explained Nokia President Pekka Lundmark. “In many cases, the results have been too good to go back to the old way of doing things.”

As we continue to navigate these uncharted waters, here’s a look at how various Cloud and Network Services employees have handled the change and how they see the future unfolding.

A routine of virtual meetings is nothing new for Nazim Baserer.

As head of a large analytics portfolio at Nokia’s headquarters in Finland, he oversees hundreds of people in various research and development roles in Finland, France, India and Israel. From a management perspective, remote work has proven only a subtle disruption to his daily job. The most drastic change has been the abrupt stop to the frequent travel he would conduct to meet his teams around the world.

“It is much easier and much more human when you have a face-to-face meeting,” he said.

Even more challenging has been supporting employees who have been deeply and personally affected by the pandemic. “You have to spend more time and effort in taking care of your team,” he said.

Personally, he’s often found himself working longer hours because of it. While he has enjoyed some of the freedom of working from home, he said he looked forward to a hybrid model that would alleviate some of that strain.

“My room is my office, and that is my home as well,” said Baserer, a 45-year-old father of three. “I’m lucky that right before the pandemic we moved into a house that has a garden. That was one of the best things I’ve done.”

Even as a child, Teresa Ramos never liked staying at home and preferred instead to get out to where things were happening.

She’s maintained the same mentality in her adult life and she hardly minded the 40-minute daily drive she made to and from the large Nokia office in Amadora, just outside Lisbon. That’s where she worked with her scrum teams and where she socialized in the canteen and by the coffee machines.

Like everyone, she has adapted and successfully so. Accustomed to virtual meetings with her direct reports in Bangalore, India, and at a different location in Portugal, she merely adopted the same model with her Amadora team.

But after more than a year at home she was tiring of the routine.

“It’s been a very hard year,” said Ramos, 59. “From an IT perspective, everything works fine, people are connected. However, I prefer the personal connection when working with my team and my peers. Networking is crucial for knowledge sharing, harnessing collective wisdom and building trust across individuals and teams.”

Her working relationship with her line manager has not been impacted by increased remote working, but she said managing employees who needed more coaching and guidance was tough.

“Personally, I would like to go back to what it used to be, working five days a week from the office, but I also accept the potential upsides of a hybrid model that can contribute to a better work-life balance. I’m sure we will learn from that experience,” she acknowledged. “At the end it’s really about the relationship with the people. This is the most important thing.”

The Covid-19 pandemic hasn’t changed the nature of Nicolas Savard’s job as a software developer, but it has upended his life.

In just over a year, he went from working in office full-time in France for a different company that didn’t even provide a laptop for off-site work to programming from home for Nokia. Now, after seeing changes to his team, he has relocated to Ottawa, Canada.

At first, Savard enjoyed the newfound freedom of remote working. But the novelty passed rather quickly for the 40-year-old father of three boys.

“It was kind of helpful to organize my day because I could pick up my kids at school, I could maintain landscaping around my house, mow the lawn and do all these things I couldn’t before,“ explained Savard, who works on cybersecurity Digital Trust products. “But the downside is that my workday could end up lasting longer. Sometimes I bring my work to the dinner table.”

He also found that the limited bandwidth he had in the French countryside affected the quality of his connectivity. But a greater fallout was that his software team based in Nokia’s office in western France was going through changes and he found himself debating whether to go back to his old job or relocating within Nokia.

The family opted for an adventure. He sold his house, said his farewells to friends, family and the only place he’s called home and moved to Canada to join a new team.

“Everyone is excited. We decided to do this as a family, to discover new things and learn about a different culture and country,” he said.

Still, the irony is not lost on him that even with this upheaval his work routine in Canada may ultimately not be that different.

“Maybe it will change if the situation improves. But for now, I know I will still need to work remotely,” he said.

For Peleg Neufeld, the Covid-era high tech reality is the only one he’s known.

Freshly graduated with a degree in computer science, the 28-year-old was hired to his first job last September right between two national lockdowns in Israel. He briefly met his team, got his laptop and within two weeks was marooned in his rented Tel Aviv apartment to work remotely.

“I was looking forward to a social experience in this job,” he said. “But it has taken time because of this delay.”

As one of the first countries to rebound from the pandemic this year, Israel restored much of the work life that existed before the pandemic. At Nokia, Neufeld enjoyed office events, shared lunches and an in-house billiards tournament. But a recent resurgence in infections has now once again forced the Nokia workforce to operate in “capsules” in which two sets of employees arrive in alternating days to prevent large gatherings in the office.

“There hasn’t been a ‘normal’ week since I arrived,” he said. “As far as I’m concerned, this is ‘normal.’ I don’t even know what I’m missing.”

So much so that he said the thought of a full five-day, in-office experience now seemed a bit ‘intense.’

Still, he said the in-person interaction was invaluable particularly for those starting out and in need of guidance and tutelage. Even at home help was just a click away, but he said there was something about the proximity that made for a smoother process when seeking even trivial assistance. And now that he’s gotten to know his fellow engineers in the Nokia Converged Charging Platform Team, he’s able to enjoy the kind of camaraderie he had hoped for at the outset.

“We have a lot of team chats, a lot of rolling over to other people’s desks,” he said. “Sometimes you just want to talk to someone and it’s so much better face to face.”