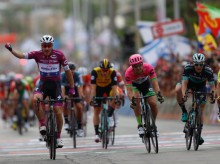 EILAT, Israel (AP) — Elia Viviani won the third stage of the 101st Giro d’Italia on Sunday for his second bunch sprint finish victory in as many days as the Grand Tour race bid farewell to its historic start in Israel.

The Italian finished the lengthy 229-kilometer (143-mile) route through Israel’s Negev desert down to its southern tip of Eilat along the Red Sea in just over five hours. Viviani edged Italian countryman Sacha Modolo at the finish line and pumped his fist in triumph in a near repeat of his sprint victory on Saturday in Tel Aviv.

“The pressure was off after yesterday’s win,” Viviani said. “But the final straight was good for me.”

The repeat victory helped solidify his reputation as one of the world’s top sprinters.

“To be honest I always raced without thinking about my competitors,” said Viviani, who won a track gold medal at the 2016 Olympics and rides for Quick-Step Floors. “I’ve got the best lead-out team for the sprints so I don’t really care who I am up against.”

Australian Rohan Dennis kept the pink jersey that he wrestled away from defending champion Tom Dumoulin on Saturday. The Dutchman remained in second place overall as Jose Goncalves moved into third.

Four-time Tour de France winner Chris Froome, who bloodied his right knee and ripped his shorts and jersey in a training crash before Friday’s opening leg, finished safely in the middle of the pack. He is currently 19th, 38 seconds behind the leader.

Sunday’s route was the second longest of the 21-stage race and wrapped up the three-day start in Israel, the first time a cycling Grand Tour has been held outside Europe. The race will now transfer to Italy, and the island of Sicily, for an early rest day on Monday. The Giro ends in Rome on May 27.

The Giro has been warmly embraced in Israel. While there were fewer spectators Sunday due to the sparsely populated southern Negev Desert than the two previous stages, the riders were still cheered on by locals banging drums and strumming guitars. They encountered Israeli flag-waving fans and spectators on horseback wearing Giro pink shirts along the way, and even passed a group of goat herders.

Dennis said the ride through the desert was not as hot as originally feared and that strong winds were the main obstacle as they went through the barren moonscape after passing by its famous craters.

Dennis praised the enthusiasm of Israeli fans he encountered over the three days.

“They took to the race really well and supported us like they were a really big cycling country, which was really nice,” he said.

The Israel Cycling Academy squad was making its maiden Grand Tour appearance and enjoyed the sight of one of its riders, Canadian Guillaume Boivin, leading for much of the stage before he was passed by the sprinters in the windy descent into Eilat.

The Giro start was seen as the biggest sporting event staged in Israel, and coincides with the country marking 70 years of independence.

Israel Cycling Academy co-owner Sylvan Adams, a Canadian-Israeli cycling enthusiast who played a key role in bringing the Giro to Israel, said it was a dream come true.

“For me, Israel has already won this race, as it afforded hundreds of millions of TV spectators to see our beautiful country and feel the warmth of our people,” he told The Associated Press. “This was a Giro d’Israel — a three-day tour around our special country.”