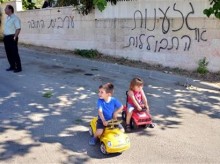 An Israeli-Arab man and children are seen on a street next to Hebrew graffiti that reads, "Racism or assimilation" and "Arabs out." (AP Photo)

ABU GHOSH, Israel (AP) — In a land rife with religious tension, one town has proven to be an exception — Abu Ghosh has been a model of coexistence in Israel for more than 65 years. This week the Arab village nestled in the foothills of Jerusalem became the latest victim in a wave of crimes linked to Jewish extremists that has plagued Israel, raising concern that growing extremism on the fringes of society could spread.

Nobody was injured when assailants slashed the tires of more than two dozen cars and sprayed graffiti reading “Arabs out.” But the vandalism and the inability of the state to stop it has sparked outrage in Israel and high-profile condemnations from across the political spectrum.

In recent years, vandals have targeted mosques, churches, monasteries, dovish Israeli groups and even Israeli military bases to protest what they perceive as the Israeli government’s pro-Palestinian policies in the West Bank. Vandals call the attacks the “price tag” for the policies they oppose.

What began as small scale attacks against Palestinians and their crops in the West Bank in response to Palestinian militant attacks or Israeli measures against settlements have since evolved into hate crimes inside Israel proper. Last December, a Greek Orthodox monastery in Jerusalem was spray-painted with anti-Christian messages. Mosques have been burned and defaced with slogans insulting the Prophet Muhammad.

Nobody has been killed in the violence, which has increasingly targeted symbols of coexistence, and it remains relatively tame in the context of the bloody Israeli-Palestinian conflict. But critics say the racist undertones endanger the state in even greater ways, by undermining the country’s stated goal of being a tolerant society that respects its minorities.

This week’s crime spree in Abu Ghosh, a 20-minute drive from Jerusalem, struck a particularly sensitive nerve. The villagers have long been loyal to Israel and have enjoyed good relations with Israelis who flock there for its signature product — mouthwatering hummus. It’s known for its restaurants and cultural events and Jews in recent years have been moving in and living peacefully alongside Arabs.

“We are very angry, but this won’t change the special relations here between Jews and Arabs,” said Ahmad Jabbar, 42, who works in a popular bakery. “We don’t know the difference between Arabs and Jews here. We are brothers.”

Police have yet to make arrests and nobody claimed responsibility, but suspicion immediately fell on extremist Jewish youths who have carried out a string of similar incidents in recent years.

“We can no longer bury our head in the sand. We must look the bitter truth in the eye, and admit that dangerous Jewish terror exists, which endangers not only its potential victims, but also the future of the state,” Ophir Pines-Paz, a former Labor lawmaker and minister, wrote on the Walla website.

Maariv columnist Ben-Dror Yemini called for some national soul-searching, saying that condemnations are not enough. “The time has come for actions as well,” he wrote.

Responding to public pressure, the government this week announced it would declare “price tag” activists an “illegal association,” which would significantly expand the investigative and judicial tools available to pursue them. Still, the government decision fell short of tagging them a “terror group,” as some in the law enforcement community had suggested. Leaders have been accused of not tackling the problem with the same urgency as, say, if the victims were Jewish.

“This is a phenomenon of Jewish civilians targeting Arab civilians,” said Jafar Farah, director of Musawa, an organization that advocates for the rights of Israel’s Arab minority. “The security services aren’t interested, and neither is the government … this has gone on for two years. There’s no serious intervention.”

Police spokesman Micky Rosenfeld rejected the accusations. He said that in 2012, 623 cases of criminal activity with nationalistic motivations were recorded, both Jewish and Arab, in which 192 people were arrested and 123 charged. In the first four months of 2013, 165 such cases have occurred, with 76 arrests and 31 indictments. But arrests in the most high-profile cases, such as attacks on mosques and monasteries, have been rare.

Rosenfeld said that unlike most Palestinian violence, the “price tag” attacks have largely been sporadic and unorganized, making the job of tracking the perpetrators far more difficult. Most of the culprits have believed to be minors operating in small groups in the wee hours of the night, so concrete intelligence has been hard to come by, he added. Still, he said police was fighting the phenomenon with vigor.

“Every Israeli police district has a unit that is focused on specifically dealing with these nationalistic motives and therefore it is one of the greatest priorities of the Israeli police,” Rosenfeld said.

In 2010, Jews and Arabs united in Abu Ghosh to set the Guinness World Record for the world’s largest dish of hummus, filling a satellite dish with more than four metric tons of the chickpea paste.

Locals pledge their bond won’t be shaken, despite the recent challenge.

“In Abu Ghosh, Jews and Arabs are one family,” said Yousef Abdel-Aziz, 60. “They are looking for a fight. We will not give it to them.”