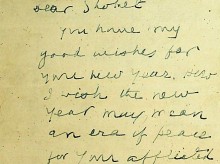 The National Library of Israel recently unearthed the 80-year-old handwritten letter during a massive review of millions of its archival documents. It was publishing it online Tuesday for the first time, offering a glimpse into the father of modern India’s complex relationship with the Holocaust.

“You have my good wishes for your new year,” Gandhi wrote to Avraham Shohet, the head of the Bombay Zionist Association, on Sept. 1, 1939. “How I wish the new year may mean an era of peace for your afflicted people.”

The famed pacifist who would ultimately lead the successful campaign for India’s independence from British Rule, inspiring future civil rights movements, expressed deep compassion for the plight of European Jews. But he also faced criticism for not speaking up forcefully enough against their persecution. Six million Jews were murdered by the Nazis and their collaborators during the Holocaust.

Gandhi advocated only for non-violent resistance to the Nazis and sent a conciliatory letter to Adolf Hitler in which he addressed the Fuhrer as a “friend” and wrote that he did not believe the German dictator was the “monster” his opponents described.

“My sympathies are all with the Jews,” Gandhi wrote in a 1938 article in his Harijan publication. “If there ever could be a justifiable war, in the name of and for humanity, war against Germany to prevent the wanton persecution of a whole race would be completely justified. But I do not believe in any war.”

Gandhi was equally coy about supporting Jewish aspirations for independence in the Holy Land, saying the Jews should engage only in non-violence against the Arabs and “offer themselves to be shot or thrown into the Dead Sea without raising a little finger against them.”

Shohet, a prominent Indian Jew, sought to influence Gandhi into more active support of the Jews. He was introduced through Hermann Kallenbach, a wealthy Jewish Zionist and close friend of Gandhi, who funded “Tolstoy’s Farm” — the South African prototype for the Gandhian ashram — where he and Gandhi had lived together. Gandhi’s days in South Africa influenced his decision to resist racial segregation and other injustices with nonviolent protests, which eventually helped India win independence from British colonial rule in 1947.

In March 1939, Shohet spent four days speaking to Gandhi at his ashram and emerged discouraged, feeling that Gandhi had adopted an Arab perspective of Zionism. Still, they appeared to connect.

“The letter is significant because, while addressed to a prominent Indian Jewish leader, it is really a personal note from Mahatma Gandhi to the Jewish people on the eve of the Holocaust, written on the very day the Nazis invaded Poland,” said Zack Rothbart, a library official who researched the letter. “It’s from one of the 20th century’s most prominent figures, who is not generally discussed in a Jewish or Israeli context.”

Not long before he was assassinated in 1948, Gandhi called the Holocaust “the greatest crime of our time,” though still adhered to his core principle of pacifism.

“The Jews should have offered themselves to the butcher’s knife. They should have thrown themselves into the sea from cliffs,” he said, according to one of his biographies. “It would have aroused the world and the people of Germany … as it is, they succumbed anyway in their millions.”