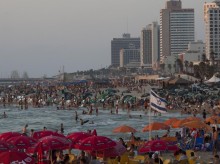 TEL AVIV, Israel (AP) — Leehee Goldenberg was having lunch at an outdoor cafe in Tel Aviv, Israel’s largest metropolis, when an air-raid siren wailed. She and other diners knew the drill: They dashed inside the coffee shop and kept away from the windows. Then, from a distance, came the boom. Minutes later, everyone was back outdoors, chatting loudly.

“It’s kind of unbelievable,” said Goldenberg, a 31-year-old lawyer. “In Tel Aviv we always feel like we live in a different world.”

For Israelis, the targeting of Tel Aviv is a direct puncture of the bubble of normalcy they have built around the city. Whenever it occurs, the outrage expressed in the media and on the street is palpable, as if what is acceptable in the southern desert or even in Jerusalem is inconceivable in a place so painstakingly trying to be “normal.”

The freewheeling seaside oasis has long served as an escape from the troubles of everyday Israel. But Israel’s financial and cultural center is also something more: a symbolic reflection of Israelis’ deep-rooted need to feel like the prosperous and progressive place many of the early Zionist founders hoped the country would become. Thanks partly to its vibrant nightlife and balmy climate, it’s also developed an international reputation as a fun place to visit. In a country where the religious population is growing, the city is overwhelmingly secular. And its tech industry is known as a hub of innovative companies on a world-beating scale.

It is this notion of preciousness that created the widespread sense that the question of whether or not Israel escalates its offensive may actually rest on whether Hamas dares target the city.

“Attacking Tel Aviv is seen as crossing a red line,” said Steven Reiter, U.S.-born banker who lives in the posh north of the city.

Violence is not unprecedented here. Tel Aviv did witness battles during Israel’s 1948 war of independence — when it was a far cry from the city of today. It was also hit by Saddam Hussein’s Scud missiles in the 1991 Gulf War. And about a decade ago it suffered an onslaught of Palestinian suicide bombings.

But Gaza militants have waited a long time to target the city with their arsenal of Iranian-made long-range missiles. With Israel starting an offensive Wednesday against them, the militants had an excuse.

Tel Avivians were caught by surprise Thursday when sirens wailed in the city for the first time in more than two decades — exhibiting a paradox of moving on despite the outrage that seemed somehow of a peace with the lovingly nurtured image of the city.

In high-rise office buildings, workers froze in silence for a few seconds before quickly and calmly walking down the stairwells to their buildings’ shelters. Some murmured “I don’t believe it” while reaching for their phones to call loved ones. Several mobile networks crashed from overload.

People parked their cars on the side of the Ayalon intercity highway, taking cover against concrete walls. Later, nightlife raged on.

On Friday morning, rockets were fired for a second day, catching Israelis lounging in their favorite cafes and restaurants.

“Everybody just got up and went inside, there was no panic, and when it was over they went back to their plates,” said Rina Kol, a schoolteacher dining near Tel Aviv’s largest open-air market.

Shortly after the siren sounded, an explosion sounded in the distance. Israeli authorities would not disclose the landing site so as not to help Gaza rocket launchers improve their aim.

Within minutes, though, customers crowded the cafes again to enjoy a mild, sunny fall day and leisurely sip their espressos. Street musicians picked up their instruments and shoppers made last-minute purchases before the start of the Jewish Sabbath.

City Hall announced it was opening all municipal bomb shelters to the public.

Eytan Schwartz, a spokesman for the mayor, said it was telling that a local entrepreneur was already developing a smartphone app that locates the closest shelter.

“The legacy of this country is that we will not let terror paralyze us. In Tel Aviv, that means we won’t let it stop us from going to restaurants and coffee shops,” he said. “Part of the legacy in this city is that the show must go on.”

Some 400,000 people live within the city’s official municipal limits, but these have been effectively wiped out by urban and suburban sprawl that swell the population to 3 million. That’s almost a third of the country’s population, and encompasses almost half its Jews.

Some 80 kilometers (50 miles) north of Gaza, Tel Aviv is often accusingly taunted by some Israelis as a “bubble,” disconnected from the rest of the country and indifferent to the suffering of about 1 million people in the south who have regularly faced the threat of rockets fired from Gaza.

“The people of Tel Aviv are now feeling a little bit of what the people in the south have been feeling for the last years, and that’s not a bad thing,” said Itai Madhalla, a 31-year-old investment manager.

Later Friday, Gaza militants escalated their fire even more by targeting, also for the first time, the city of Jerusalem.

Despite the general mood of calm and steely resolve, some in Tel Aviv admitted to being shaken.

“I am not afraid of being hit, but I just don’t want to be alone when the alarm goes off,” said Rebecca Mandel, a 28-year-old PR consultant.

Some hotels reported cancellations from overseas. Dani Tamari, the manager of a boutique hotel in downtown Tel Aviv, said that after the first attack Thursday evening guests were offered free shots at the hotel bar and massages to calm frayed nerves.

The scenes of lively normalcy in Tel Aviv were surprising to foreigners and recent immigrants. On trendy Rothschild Boulevard, home to many of the boxy 1930s Bauhaus-style buildings that earned the city a rare UNESCO designation as a World Heritage Site, stores and shops were bustling.

“I come from a quiet country, and yesterday I heard sirens and had to run to a shelter for the first time in my life,” said Vivian Hamui, 21, who moved from Panama five months ago to study here. “I am still in shock at how Israelis take it — look, that guy is just drinking coffee, that one is playing his guitar.”