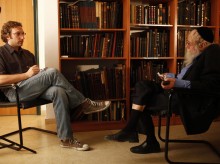 JERUSALEM (AP) — The perpetually sleep-deprived scholar sits slouched in a large chair, a pipe to his lips, his long white beard curled into knots, strands of hair poking out from beneath his black skullcap. Lacking a rabbi’s traditional booming voice, he speaks so softly one often has to lean in closer to hear his insights.

But Rabbi Adin Steinsaltz’s message resonates clearly to the far corners of the Jewish world. The 73-year-old rabbinical scholar has just completed a monumental 45-year project hailed in Jewish scholarly circles as a breakthrough of biblical proportions – the most comprehensive translation and commentary of the Talmud, with its 63 basic sections and nearly 6,000 pages.

The Talmud is the central text of mainstream Judaism, detailing rabbinical discussions over the centuries pertaining to Jewish law, ethics, philosophy, customs and history. But because of its complexity, obscurity and the fact that much of it is written in the ancient Aramaic language, the rarified text has for centuries remained beyond the scope of comprehension of all but a select group of scholarly Jews.

Steinsaltz coins his quest to educate Jews “Let my people know,” a play on Moses’ passage from Exodus: “Let my people go.” Now, thanks to his 45-volume series, anyone with a command of Hebrew can study the sacred text.

“I do believe that this knowledge, it is not just knowledge of history, it is knowledge of ourselves, it is our own picture,” Steinsaltz told The Associated Press at his modest Jerusalem office. “Talmud is a book that has no real parallel … it is a constant search for truth, for absolute truth.”

Steinsaltz has spent the majority of his life doing just that. For four and a half decades, for as long as 16 hours a day, he labored over the ancient texts, translating them from the Aramaic into modern Hebrew – and parts into English, Spanish, French, and Russian as well.

More importantly, he added his own explanations of phrases, terms and concepts, as well as listing the rulings of Jewish law derived from the text.

There have been other, partial translations into English and other languages, but none are as comprehensive or have as extensive a commentary.

Shalom Rosenberg, a professor emeritus of Jewish Thought at the Hebrew University of Jerusalem, said Steinsaltz was upholding the legacy of Shlomo Yitzhaki, the famed medieval French rabbi known by his acronym Rashi, who authored the first comprehensive commentary on the Talmud more than 900 years ago.

“Rashi did the first revolution, turning it into a book you could read. Now Steinsaltz has opened it up even to people who didn’t go to Yeshiva (religious seminaries),” he said.

Still, he said, Steinsaltz’s Talmud is like giving someone a map to the jungle – “but there is still a way to go before understanding the jungle,” he said.

The project has not been without its detractors. Over the years, some ultra-Orthodox scholars criticized Steinsaltz – even boycotted him – saying Talmud study should be reserved for rabbinical experts.

“They perceive the popularization of the Talmud as too bold a move, with too much chutzpah,” he said.

Steinsaltz, whose three children have adopted the Hebraized surname Even-Israel, was born in Israel to secular parents but became observant in his teens, when he entered seminary schools and learned Aramaic.

After studying physics and chemistry at Hebrew University, he became a math teacher and at the age of 24, according to his website, the youngest school principal in Israel’s history. Three years later, in 1965, he began working on what he called his “hobby” – the translation of the Talmud. The effort earned him the 1988 Israel Prize – the nations’ highest civilian honor.

Over the years, he has established a network of schools in Israel and the former Soviet Union, and he has written more than 60 books on subjects ranging from zoology to theology.

But the Talmud has remained his greatest passion.

He explained that he took to it like a musician takes to an instrument and he compared comprehension of it to that of math and music.

Studying the Talmud, with its paradoxes and oxymorons, is itself a form of worship, he says. “The Lord is talking to us and He just waits for someone on the other end of the universe to say ‘hello,'” he said. “That is the essence of prayer, to say ‘hello.'”

Earlier this month, his achievements were celebrated with the Global Day of Jewish Learning – described as the first worldwide, trans-denominational and non-denominational event devoted to Jewish study. Since last week, he has been on a U.S. tour marking the publication of the final chapter of his 45-volume Talmud series.

The Talmud is made up of two main parts: the Mishna, oral law written down in the third century A.D.; and the Gemara, a much lengthier work amplifying the Mishna and compiled in the centuries that followed.

The debates in the Gemara over the Mishna’s rulings range from whimsical to angry to humorous. Often a conclusion is reached about what the Mishna means, resulting in a declaration of Jewish law, but sometimes a “tie” is declared.

“So the main thing is what they used to say in the Middle Ages: The end of knowledge is that we do not know,” he said. “The more you climb the more you know that you don’t know.”

After writing millions of words, he said his drive to learn more has not diminished. He described an “oceanic feeling”, a blissful sense of seeing a touch of infinity in his quest for illumination.

“I am preparing for the next 170 years because I have a lot of work to do. Now if the boss decides that he wants me elsewhere so I will have to move, but as long as I am here I have lots of things to do,” he said.