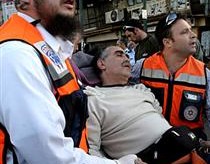 TEL AVIV, Israel — A Palestinian suicide bomber blew himself up at a Tel Aviv fast-food stand Thursday, wounding 20 people in an apparent attempt to destabilize the region just a week before the Palestinian parliamentary elections.

The militant Islamic Jihad group claimed responsibility in a telephone call to The Associated Press. The group has been responsible for all six suicide bombings in Israel in the past year, and is the only faction boycotting the Jan. 25 vote.

The bomber, who witnesses said pretended to be a pedlar selling disposable razors, walked into The Mayor’s Shwarma in a crowded pedestrian mall near the old central bus station. Most of the customers were sitting at sidewalk tables, rather than indoors, because of the sunny weather.

Yehiel Ohana, who works in a nearby store, said the bomber wore a black coat and black stocking cap, and aroused his suspicions because of his unsteady gait.

”The guy was standing at the corner of the street, looking like he was waiting for someone,” Ohana said. ”He swayed strangely. Then he went into the shwarma stand, and two to three seconds later, we heard the explosion. Everything shuddered. We entered the shwarma stand, and we saw him lying on the floor, and then we understood he was a suicide bomber.”

Police initially said the bomb apparently went off in the restaurant’s bathroom, possibly prematurely as the attacker tried to prepare it. However, police spokesman Mickey Rosenfeld later said the blast did not go off prematurely.

Blood, shattered glass and debris covered the ground. The windows of a parked car were blown out, and helmeted security forces cordoned off the area. A crowd gathered outside the restaurant and an elderly man wearing a felt hat wept.

”All of a sudden, there was an explosion. I looked out and I saw people running with blood on them,” said Benny Ezrami, who works at a trinket store next door. His co-worker, Maya Hazfon, said ”God protected us.”

The old bus station is in a neighbourhood where many foreign workers live.

Palestinian leader Mahmoud Abbas said the attack was meant to derail next week’s parliamentary vote. ”This is sabotage and aimed at sabotaging the elections, not only the elections, but also the security of Palestinians,” he said at his office in the West Bank city of Ramallah. ”The culprits must be punished.”

The bombing came two weeks after Prime Minister Ariel Sharon suffered a devastating stroke. Handling the aftermath of the bombing and deciding on a possible Israeli response will be a key test for acting Prime Minister Ehud Olmert.

Since taking over, Olmert has signalled a greater willingness than Sharon to resume stalled talks with the Palestinians on a final peace agreement. He has approved the right of Palestinians in east Jerusalem to vote in the parliamentary elections and ordered security forces to crack down on illegal Jewish settlements in the West Bank.

It was the first suicide bombing in Israel since Dec. 5, when a bomber detonated explosives outside a shopping mall in the coastal town of Netanya, killing five Israelis.

The old bus station has been targeted by bombers three times in five years. In January 2003, 23 people were killed and about 120 wounded in a double suicide bombing in the area. A year earlier, 25 people were wounded in a blast outside a cafe near the bus station.