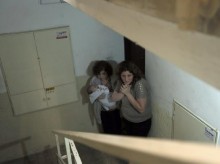 Israeli women take cover in a stairwell as a siren signals the warning of incoming rockets. (AP Photo/Tsafrir Abayov)

SDEROT, Israel (AP) — In this southern Israeli town, which has lived for nearly 13 years under the constant threat of rocket attacks from Gaza, there is little joy over a new cease-fire between Israel and Gaza’s Hamas rulers: Schools remain closed, traffic is sparse and hope is hard to find.

The working-class residents of Sderot have seen previous lulls in violence quickly unravel. This time around, they are wary of new promises of calm, and many say the military should have continued its offensive in Gaza until Hamas was decisively beaten.

‘‘This quiet is hard to swallow and it doesn’t do us any good,’’ said Ortal Buchbut, 31. ‘‘We know that at some point it will end and things will go back to being what they were, or worse.’’

Israel launched its campaign on Nov. 14 in a bid to end months of renewed rocket fire out of Gaza, carrying out hundreds of strikes. During the eight days of fighting, some 1,500 rockets were launched at Israel, targeting Tel Aviv, Jerusalem and other major cities for the first time.

For Sderot, though, it was nothing new. More than any other Israeli town or city, Sderot has been pounded mercilessly by Gaza militants, making life here nearly unbearable.

Less than a mile (2 kilometers) away from Gaza, Sderot has been a favorite target of Gaza militants. Eight residents have been killed since rocket fire began with a Palestinian uprising in 2000, hundreds have been wounded and nearly everyone traumatized by the frequent wail of sirens and explosions.

Despite fortifications that have secured schools and homes in recent years, keeping casualty figures down, the threat has remained.

Experts warn of long-lasting psychological damage inflicted on Sderot’s 24,000 residents, particularly children, who suffer from exceptionally high rates of anxiety and bed-wetting compared to other Israeli children, according to psychologists who have researched the phenomenon.

On Thursday, residents gingerly emerged from their homes to take in some fresh air and do some shopping, even though most stores remained shuttered. There was little movement around the town’s main traffic circle, which also serves as a memorial to those slain by rocket attacks over the years.

Those who ventured out expressed frustration with the cease-fire, saying Israel’s offensive ended too quickly and that they were willing to absorb more abuse in return for a chance for quiet, once and for all.

‘‘Hamas needs to be eliminated, completely. Nothing else will work,’’ said Yisrael Haziza, 68, sitting outside a mostly empty convenience store.

An acquaintance passed by, offering a more subtle view.

‘‘We have no more energy, maybe now we’ll get a breather, God willing,’’ Florie Vanunu said.

She said carrying out the ground operation Israel was threatening could have cost the lives of soldiers. But she had no illusions that her troubles were over either.

‘‘I know that there are citizens who expected an even sharper response,’’ he said, after meeting police commanders. ‘‘This is the right thing to do for the state of Israel at this time, but we are also prepared for the possibility that the cease-fire will not be upheld, and we will know how to act if need be.’’

In Ashkelon, a coastal city of 120,000 farther to the north, life was returning to normal more quickly. With schools still out, the malls were filled with children watching a clown show and playing with balloons. People were visibly jittery though when one popped loudly.

‘‘We’re not ready for that yet,’’ a waitress said with a smile.

Businesses reopened but suffered from shortages of supplies and employees who had fled farther north during the fighting, in which 125 rockets were fired toward the city.

Despite a palpable sense of relief, residents were still angry about how the fighting ended — with Hamas still standing and claiming victory. The militant group held mass celebrations in Gaza on Thursday.

‘‘I don’t understand how they can attack and kill our people and nobody cares, but we can’t attack them,’’ said Uri Nuriel, a 57-year-old who works at a jewelry store and thought Israel acted too soft in the offensive. ‘‘If you come after me, I’m going to come after you. ‘‘In the Middle East you have to behave like the Middle East, not Switzerland. Something has to change here. This is an impossible situation. Any other country in the world would have just wiped them out.’’

Yaniv Tzur, 24, said he was pleased to be reopening his frozen yogurt shop but would have preferred to wait it out longer in order to deliver a more devastating blow to Hamas.

‘‘This thing will last six months, maybe eight months, a year tops,’’ he said. ‘‘We have to finish off Gaza so they can’t threaten us ever again. If we are already suffering, then we should go all the way. When you start something you should finish it, or else don’t do it at all.’’

Life in the desert city of Beersheba was back to its usual humdrum beat, minus the thousands of university students usually seen biking on the main roads. Despite the cease-fire, classes remained canceled and many students had evacuated the city. Restaurants were filling up once again, after more than 160 rockets were fired at the city of 200,000 over the past week.

At the Soroka Medical Center, the 55 premature newborn babies that were moved from the infant ICU ward during the fighting still remained in their temporary location in a sheltered wing of the hospital.

Sara Bar, 60, a retired supervisor of the hospital’s emergency room, paged through her phone’s Facebook news feed and pointed out caricatures and commentary goading Netanyahu for ending the hostilities early.

‘‘We’re in a dilemma. If we had continued, soldiers would have been killed,’’ she said. ‘‘But for our own sense of quiet, the only way to prove to (Hamas Prime Minister Ismail) Haniyeh that we will beat him is to go in.’’