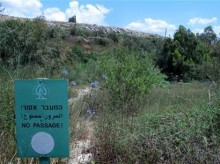 A sign warns not to approach the Lebanese border from a trail in Metulla, Israel's most northerly point. (AP Photo/Aron Heller)

METULLA, Israel (AP) — A frontier town that juts into a hostile neighboring country and has a long history of militants firing upon it doesn’t seem like a typical place to seek serenity. But that’s exactly what you will find in Metulla, Israel’s most northerly point, which is engulfed by Lebanon on three sides but which is home to a nature reserve.

Barbed-wire and electric fences divide the countries and signs warn against approaching the border at almost every turn. Lebanese cars and homes can be easily glimpsed upon from just a few hundred meters away, as well as the yellow flag of the Hezbollah guerrillas flapping in the wind just across the border, a reminder of the bloody war that raged a decade ago and rained rockets on the region.

But all that seems a world away once you enter the Nahal Iyyon Nature Reserve on the northeast corner of town and descend into a narrow canyon along a scenic hiking trail. The track is carved out alongside a babbling stream that includes romantic pathways shaded by droopy eucalyptus trees and breathtaking waterfalls. If you are lucky enough to find yourself alone on the trail, let yourself enjoy the silence, interrupted only by birds chirping, the occasional tractor humming on the Lebanese road above and water trickling through this tributary to the Jordan River. The animal life you’ll encounter includes frogs, crabs and large neon blue dragonflies.

The highlight is reaching the third waterfall on the trail and the most majestic. The “Oven Fall” is a 30-meter (100-foot) drop that sends water crashing into a pool below and which over time has created a noted chimney shape to the rock formation. There’s a perch from the canyon ridge offering a view of the plunging fall and also a shaded platform at the bottom where the mist will cool you off on a hot day.

The reserve is not without its reminders of the area’s troubled history. The entrance is beside a military base and a memorial to 12 soldiers who were killed in a blast during Israel’s lengthy military presence in southern Lebanon. The trail begins at the remains of the Iyyon Bridge, which was blown up in the late 1940s by Jewish militias fighting for an independent Israeli state, and passes by the Metulla cemetery, which includes the final resting place of some of the Lebanon conflict’s victims.

Still, it all only seems to add to the tranquility of the 90-minute hike through Israel’s most northerly nature reserve.

If you’ve got more time to spend in Metulla, there are a few quaint bed and breakfasts, some historic sites and the Canada Center — housing Israel’s only official skating rink and hockey center.

But if it is quiet you seek, stick to nature where the violence of the past is more easily forgotten.