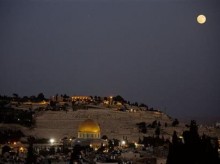 JERUSALEM (AP) — In one of the most contentious tracts of real estate on the planet, serenity is not that easy to find.

The Old City of Jerusalem is a tourism paradise for history buffs or religious pilgrims, featuring the epicenters of all major monotheistic faiths. But calm it is not. The major landmarks in the Jewish, Muslim and Christian quarters recall the ancient violence that took place here — the destruction of the Jewish Temples, the crucifixion of Jesus, the massacres of the Crusaders — and the multi-language cacophony of chatter in cramped alleyways and the pushy locals can make even the most spiritual visit unnerving. The occasional stabbing attack serves as an all-too-real reminder of modern-day tensions that remain between Jews and Arabs. The quietest quarter is the Armenian, and there too you’ll find reminders of their century-old genocide.

If you are looking for a place to soak in the past and present in a more relaxed manner, though, your best bet may be on the picturesque balcony atop the Notre Dame of Jerusalem Center. There, just across from the New Gate into the Old City, you can finally enjoy some quiet and peacefully take in the magnificence of the city below.

A glass of wine helps, and the breezy rooftop wine and cheese restaurant there offers a variety of (albeit pricey) options. Straddling the invisible line between east and west Jerusalem, it offers an elevated view of the adjacent holy sites like the Dome of the Rock and the Church of the Holy Sepulcher beyond the Old City walls.

With a nearly panoramic view of Jerusalem you can also get a glimpse of Ramallah to the north, Bethlehem to the south and, on a clear day, Jericho and the road to Jordan to the east.

The building itself is also of interest and provides a quiet alternative to the hectic streets outside.

Built by the French Assumptionists from 1884 to 1904, the pontifical institute at Notre Dame has been one of the most significant Catholic pilgrim centers in the Holy Land. Administered by the Vatican, it is now also an exclusive guest house for people of all faiths. Pope Francis stayed there last year during his visit to the Holy Land.

You don’t have to be the pope though to enjoy a bird’s eye view of one of the top tourist destinations in the world — without the intensity of having to navigate it yourself.