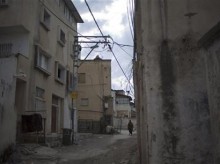 TAYBEH, Israel (AP) — Israel’s powerful and outspoken foreign minister has enraged the country’s Arab minority by proposing that some of its towns and villages be handed over to a future Palestine in exchange for parts of the West Bank where Jewish settlers live.

The proposal, rejected by both Palestinians and other Israeli leaders, nonetheless has deepened Arab fears that they are not welcome in the Jewish state and leaves them in the awkward position of insisting on staying Israeli. They say that their solidarity with their Palestinian brethren does not mean they are disloyal to their own country and should not be treated as second-class citizens.

“I didn’t come to Israel, Israel came to me. … They can’t take away my rights,” said Abdul Rahman Haj Yahiya, 79, an eighth-generation resident of Taybeh. “If Israelis can identify with Jews around the world, why can’t I identify with Arabs too?”

A town like Taybeh, home to some 40,000 people and only a mile away from the Palestinian-controlled West Bank, likely would be a prime target under Foreign Minister Avigdor Lieberman’s plan. Lieberman, a leading voice in Israel’s so-called nationalist camp, has long been a skeptic of peace efforts with the Palestinians and is a frequent critic of Israel’s Arab minority. His latest proposal appears to be aimed at complicating U.S. Secretary of State John Kerry’s peace efforts as much as it is at unnerving Israeli Arabs.

Israel’s Arabs make up about 20 percent of the country’s 8 million citizens. They descend from those who decided to stay in the country upon Israel’s establishment in 1948, in contrast to hundreds of thousands of Palestinians who fled or were driven away.

While they freely identify with their Palestinian counterparts, there are also key differences. They have become fluent in Hebrew. Although they generally suffer from second-class status in Israel, they hold full citizenship rights and enjoy a higher standard of living and more civil liberties than in other Arab countries — a reality they say they are loath to swap for life under Palestinian rule.

At the same time, Arabs do not serve in the military like Jewish citizens. With many siding openly with the Palestinians — and a small number even charged with spying for Israel’s enemies — they have also drawn accusations of being a disloyal fifth column.

Lieberman’s hard-line nationalist party, Yisrael Beitenu, or “Israel is our Home,” has long called for aggressive action and pushed for legislation that would have required a loyalty oath to Israel as a Jewish state and stripping citizenship to those who refuse.

The Palestinians seek a state in the West Bank, Gaza Strip and east Jerusalem, lands Israel captured in the 1967 Mideast war, but would accept minor land swaps to allow Israel to keep some Jewish settlements blocs. Lieberman unveiled his swap idea this week.

Lieberman said no one would be uprooted from their homes. Instead, the border would merely be adjusted to place Arab towns inside Palestinian territory. He also said he would not support any peace agreement brokered by Kerry that does not include his demand.

As Prime Minister Benjamin Netanyahu’s most important political partner, Lieberman has enough sway to bring down the governing coalition, a scenario that would throw peace talks into disarray. Dovish opposition parties have said they would fill any void left by defecting hard-liners, though it remains unclear whether their support would be enough.

Lieberman’s plan has been roundly rejected by Palestinians, Israeli Arabs and even mainstream Israelis. It also faces many challenges under international law. While there is a precedent for citizens being swapped between countries following World War II, the only way for it to happen today would require a mutual agreement between two sovereign nations, an endorsement from the international community and the agreement of the citizens themselves, said Emmanuel Gross, a legal expert at Haifa University.

“You can’t draw a border that harms your own citizens and it can’t be done unilaterally,” Gross said.

Arab lawmaker Ahmad Tibi said the mere suggestion of such a plan reeked of racism and discrimination. “Citizens are not chess pieces to be moved around at will and this just heightens our sense of estrangement from the state,” he said.

Tibi, a Taybeh resident and former adviser to Yasser Arafat, said he has been assured by Palestinian President Mahmoud Abbas that the issue has not some up in peace talks and would be immediately rejected if it did.

Mohammad al-Madani, a member of Abbas’ Fatah party, said that while the movement represents Palestinians all over the world, Israeli Arabs were “a special case.”

“They are citizens of Israel and stayed in their historical home land and no one has the right to change their reality,” he said. “The right wing Israeli wants to get rid of those people just because they are Arabs.”

Israeli President Shimon Peres has rejected the plan, as has Interior Minister Gideon Saar, a stalwart in the ruling Likud Party, and others in Israel’s national camp. Neither Netanyahu nor Kerry has commented publicly on the plan.

In Taybeh, it is hard to find anyone open to the concept. The streets of this middle-class town are lined with shops and mosques just like any Arab village. Graffiti bearing the Palestinian flag can be found easily. But highlighting its duality it is also deeply influenced by a proximity to nearby Jewish towns, whose residents frequent Taybeh’s stores, auto shops and restaurants.

“You can’t uproot someone from their home. I was born here. I am Israeli,” said Nasser Saadat, 36. “We live with our Jewish neighbors, just like the Prophet Muhammad did. How can we go to another country?”