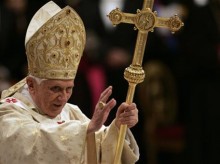 JERUSALEM (AP) — When Joseph Ratzinger became pope in 2005, many in Israel wondered whether the German-born Cardinal with the Nazi past would prove a worthy successor to the popular Pope John Paul II, whose pluralistic path helped sooth centuries of fraught relations between Jews and Christians.

“I greatly appreciate him for his immense activity to interfaith connection that has contributed greatly to the reduction of anti-Semitism in the world,” said Yona Metzger, one of Israel’s two chief rabbis. “I pray that his legacy is preserved and that the trends he led will continue since the relations between the rabbinate and the church during his term were the best ever.”

Israeli President Shimon Peres, a Nobel peace laureate, said he was “saddened” to hear of Benedict’s departure, and praised the outgoing pope for strengthening ties between the Vatican and the Jewish state.

“Under his leadership the Vatican has been a clear voice against racism and anti-Semitism and a clear voice for peace. Relations between Israel and the Vatican are the best they have ever been and the positive dialogue between the Catholic Church and the Jewish people is a testament to his belief in dialogue and cooperation,” Peres said.

Benedict, who was forced to join the Hitler Youth as a child in Nazi Germany and then served in the German army before deserting near the end of the war, made improving relations with Jews a priority of his pontificate. He visited the Auschwitz Nazi death camp in Poland and Israel’s Yad Vashem Holocaust memorial. In a 2011 book, he made a sweeping exoneration of the Jewish people for the death of Jesus Christ, contradicting interpretations that had been used for centuries to justify the persecution of Jews.

But he also had a series of missteps that angered Israel and Jewish groups, most notably when in 2009 he lifted the excommunication of a traditionalist British bishop who had denied the extent of the Holocaust. Jews were also incensed at Benedict’s constant promotion toward sainthood of Pope Pius XII, the World War II-era pope accused by some of having failed to sufficiently denounce the Holocaust.

His 2009 visit to Israel drew a lukewarm response from officials at Yad Vashem, who found Benedict’s speech lacking. Israeli officials considered it a glossing over of the Nazi genocide since the pope never mentioned the words “Nazis” or “murder” in his speech and left out the figure of 6 million Jews killed.

Jews suffered centuries of persecution at the hands of the church, which traditionally held them responsible for rejecting and killing Jesus. In the 1960s, the church disavowed that view, rejected anti-Semitism and started dialogue with other religions.

Benedict’s predecessor asked for forgiveness on several occasions for the wrongs inflicted by Christians on Jews. His landmark 2000 trip to Israel represented a highlight of the improved relations.

Benedict was “literally walking in his path, going to the synagogue in Rome and visiting Israel and nurturing bilateral relations with the chief rabbinate,” Rosen said. “I think history will see him as a very important consolidator of his predecessor’s position with regard to Jews, Judaism and Israel.”

Danny Ayalon, a former deputy prime minister who represented Israel in talks with the Vatican over its status in the Holy Land over the past four years, said Benedict was perhaps treated unfairly over his Nazi past.

“He was conscripted and did not volunteer … his family and (he) himself actually showed objection to the Nazi regime. I believe he did redeem himself,” said Ayalon. “I have learned to appreciate his spiritual prominence and also his friendship … to the Jewish people.”