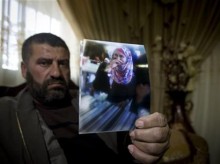 Ramiz Hassoneh holds a photo of his daughter, Maram, in the West Bank city of Nablus. (AP Photo/Majdi Mohammed)

NABLUS, West Bank (AP) — When Palestinian youths began a wave of grassroots and often suicidal stabbing attacks against Israeli soldiers and civilians several months ago, it wasn’t his three sons that Ramiz Hassoneh was worried about — it was his daughter.

Ignoring her father’s warnings, 20-year-old Maram took a kitchen knife to an Israeli military checkpoint on Dec. 1 and was shot dead as she tried to attack the soldiers, according to the Israeli military. The deadly mission put her among some 20 young females who have been involved in attacks on Israelis in recent months — a new trend that has confounded both Palestinian families and Israeli security officials.

While battling Israel was once a role restricted to Palestinian men and boys, the current wave of violence has seen an unprecedented spike in female involvement. And where the few women who did engage in attacks in the past were typically underprivileged females seeking redemption after being rejected by their families, the attackers are now largely ideological, educated women from supportive homes.

Palestinians consider the trend to be a combination of rising Islamist zeal, the growing role of women in the conservative society and the brewing desperation of a younger generation with few prospects.

In Maram’s case, her family said she had a burning drive to resist the Israeli occupation somehow. A top English student at An-Najah University and a devout Muslim, Maram was deeply troubled by TV images showing the death of young Palestinians killed in attacks and clashes with Israel.

She had memorized the entire Quran and cited religious and nationalistic motives for her desire to strike at Israelis. Unlike her younger brothers, who busied themselves with daily life, her father said Maram was an independent thinker who couldn’t be swayed from her convictions, even after serving six months in prison for another unsuccessful stabbing attempt on a soldier two years earlier.

“Girls are more sensitive to the occupation. They are more emotional about these things,” said Hassoneh, sitting in his Nablus home under a large poster of his late daughter wearing a headscarf. “She believed that she would inspire the boys to do something … She looked at me and said: ‘When our men who sit in coffee shop see (a girl) killed, they will move.'”

His wife, Hanan, sitting next to him with a gold necklace featuring Maram’s image, said her sorrow was mixed with pride. “I’m happy she is a martyr, but I miss her a lot,” she said.

Since the violence erupted in mid-September, 21 Israelis and an American Jew have been killed, mostly in stabbing attacks carried out by young Palestinians in their late teens or 20s. Many attackers were doomed to failure from the start, armed with only crude weapons such as knives, scissors and potato peelers.

At least 132 Palestinians have been killed, of whom 11 were women. Israel has identified 91 of the Palestinians killed as attackers; the rest died in clashes with Israeli troops.

Israel says the violence is the result of incitement by Palestinian leaders and on social media sites. The Palestinians say it stems from frustration over nearly 50 years of occupation, failed peace talks and continued Israeli settlement construction.

In previous rounds of violence, women were expected to stay home while the boys fought. But women’s increased presence online, where most of the rallying cries to violence take place, and general advancement in society have emboldened many to partake in the “national struggle,” said Jihad Harb, a Palestinian researcher and commentator.

“Social media has opened a new horizon for the new generation. They interact and build their thoughts in a new way that gives girls the same chances of boys,” he said.

The Israeli military says that of 152 attacks recorded, 22 were by women. It attributed the rise to a new, bolder generation of Palestinian women that did not belong to the established military organizations and did not ask for anyone’s permission to act.

One of the most notable incidents involved a pair of cousins, aged 16 and 14, who stabbed an elderly Palestinian, mistaking him for an Israeli, with a pair of scissors near a popular Jerusalem marketplace. Security camera footage captured a police officer shooting one of them dead and wounding the other.

Ibrahim Awwad, the father of 16-year-old Norhan, who was wounded, said he was shocked by their botched attack and could only speculate that they were driven by the daily life in the Qalandia refugee camp north of Jerusalem, where they often woke to the sounds of shootings.

“If I knew they were going to carry out an attack, I would have tied them up in the house,” he said. “But everything was normal. There were no signs.”

Police spokesman Micky Rosenfeld said that because females didn’t fit the typical profile of an attacker, they aroused little suspicion and had an easier time getting around Israeli checkpoints. That has now changed.

Hanan Ashrawi, the most senior female Palestinian official, said the surge in attacks reflects an overall more active political approach of the younger generation. She said that Israeli measures had provoked all Palestinians and that women feel “they are just as affected by this reality.”

Deeper religious devotion was also a factor, she added.

Taha Qatanani said his 16-year-old daughter Ashraqat’s greatest wish was to pray at the Al-Aqsa Mosque in Jerusalem, and when he was unable to get her the necessary permits, she accused him of letting her down. Tensions at the site, the third-holiest in Islam, and rumors that Israel was trying to expand its presence there enraged her, Qatanani said.

On Nov. 22, she pulled out a knife at the entrance to a West Bank military base when a settler driving by veered off the road and struck her with his car. A soldier then shot her dead.

“As long as there is occupation there will be resistance,” said Qatanani, who served several stints in Israeli prisons for his activity in the Islamic Jihad movement.

In the family living room on the outskirts of Nablus, there was a makeshift shrine to Ashraqat featuring her image against a backdrop of Al-Aqsa and a wooden carving in her honor with a bloodied knife piercing through a map of historic Palestine.

“I would have much more relief if my son had done it,” Qatanani said over tea, pointing to 18-year-old Yassin. “My masculine mentality says the man should do it. But I consider the girl doing it a much stronger message … when it gets to the degree that a girl carries out an attack it means there is nothing else.”