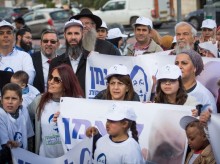 Published in The Seventh Eye, Israel’s only independent magazine devoted to Journalism, the Media, Freedom of Speech and Transparency. Can be found here.

A Hebrew version of this story is available here

Quick: What’s the crisis at Hadassah hospital’s pediatric oncology department all about?

Admit it, you’re stumped. You’ve seen the pictures of the cancer-stricken children, heard about the doctors resigning and the parents’ hunger strike, read about Litzman and Rothstein and the rival director at Shaare Zedek. But what’s the issue, how significant is it and what can be done to resolve it?

Don’t feel bad if you don’t have all the answers. I follow news for a living and I can’t figure it out either.

That’s because once again the local press corps has failed us in performing its most elementary mission – informing the public and helping it make sense of our world. Time and again the Israeli media migrates toward emotions, sensationalism and gossip and away from facts and analysis. It assumes we either already know the context, or don’t care enough to understand it. Pulling at our heart strings or sparking our anger seems to be the goal, even if we don’t know enough to draw on these emotions or opinions ourselves. Worst of all, it often takes sides instead of offering impartial reporting.

While that may drive conversation (and ratings), it’s not good journalism.

In my eight years of teaching journalism, I’d repeat to my students, like a mantra, the best definition I could come up with for how to describe news: “Fresh information that interests and affects us”. But my local colleagues sometime forget that the order matters – the fresh information has to come before we understand how it interests or affects us. In other words: We need to know what’s going on before we get all worked up over it.

Think about the Western Wall access saga of recent days. We’re hearing about the passions resulting from the government cancelling a compromise agreement with liberal Jews in the diaspora, but not much about the agreement that was cancelled itself. Did you even know there was already a limited egalitarian prayer site in place? Some journalists I spoke to did not. How about Shaul Elovitch and the fraud probe at Bezeq? Can anyone succinctly describe the charges and how wide the scope is?

When journalists don’t know all the details they fall back on technical terms they’ve been fed. What we need is more explanatory journalism. The Marker and the Kan news corporation are among those who have been doing some of this lately, but much more is needed for it to trickle down to the man on the street. Israelis don’t need as much background as foreign audiences, but they need some for a more measured perspective.

I don’t suspect malice here. It doesn’t appear to be by design and is more likely a result of laziness or impulse. Israel is an emotional country and its people are predisposed to be easily moved and outraged, even if only for a few news cycles. The Israeli media is merely a reflection of that. But as journalists, our job is to keep a certain distance so we can focus on the facts rather than just enflame sagas, assign heroes and villains and prod (sometimes misguided) indignation from our viewers, listeners and readers.

I often cringe when I see Israeli broadcasters end sad news segments with emphatic sighs and feigned expressions of pain. The worst is the vacuous throwaway line on how terrible it is and how nobody cares. I switch stations when the morning radio host devotes an entire block to a teary interview subject and whose half-dozen questions are all a variation of how the interviewee feels rather than what has actually happened. Any death or other misfortune is obviously tragic, but we don’t need someone to spoon-feed that emotion to us. Let people decide themselves how sad and outrageous it is.

In many of the Israeli media-generated scandals and spectacles, there is an additional layer to the “what is the news?” oversight, and that is “why is this news?”.

In such an intimate society, lots of news is generated from word of mouth and reporters’ private WhatsApp groups. All local media tends to be provincial. Still, I often find myself watching the national newscasts and wondering how such inside baseball has become top story material.

Remember Inbal Or, the bleach-haired real estate executive whose fall from grace and tear-jerking confessions were breathlessly reported upon? What was the big news there? What kind of impact did it have on home owners?

How about the Harpaz affair, that dominated the military-security beat for months and dragged on for years? Can anyone explain what actually happened there, who was plotting what to whom and why average Israelis should be bothered by it?

It’s even worse when the media is reporting about itself. Amid the breathless talk of the death of democracy over the public broadcasting authority reform, the chronology was lost and a week after veteran anchors wept on air in a wake-like final broadcast the very same anchors were seen on TV again as part of the new corporation. What had actually changed and did the public even get it?

We live in a complicated world and an even more complicated country, and its complex issues are often hard to conceptualize and convey. But that’s the job of the media. If the reporter doesn’t understand the story, his audience surely won’t. We’ve all erred in misidentifying trends, falling prey to spins and judging the value of various stories incorrectly. But the media has to get back to the basics and remember its core mission: to curate what’s important and why it matters to its citizens.

Which brings me back to Hadassah. Obviously, there’s a story here. Children’s suffering is a slam dunk in the news business, and here we have children whose cancer treatments may have been compromised because of hospital politics. But after speaking to hospital officials and health care correspondents, here is a paragraph I believe has been missing from the day-to-day coverage:

Several dozen children have had their physicians swapped or have transferred to far-off hospitals after six doctors and three medical interns of Hadassah’s pediatric oncology department resigned in March in protest over hospital director Zeev Rothstein’s cost-cutting measure to merge its blood marrow treatment division with the adult one. The doctors, backed by the children’s parents, say the differences are professional, and they couldn’t adequately care for the children this way. Hadassah, backed by the health ministry, says it was personal and the doctors were seeking to improve their working conditions by transferring to Jerusalem’s nearby Shaare Zedek hospital, using the children as leverage. The sides are still at loggerheads, even after Prime Minister Benjamin Netanyahu’s plea for a resolution, and the Supreme Court has ordered arbitration.

That’s it, 127 words of context to bring us up to speed on a fast moving story. It’s not sexy, it’s not exciting, but we need that information so we can understand what’s actually happening and why these children are crying on television. Only then can we really articulate our own opinions and emotions.

Aron Heller is an Associated Press correspondent based in Jerusalem and a former journalism professor at the Interdisciplinary Center Herzliya.