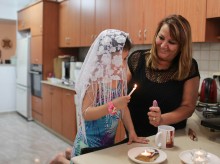 HOLON, Israel _ Roni Ben-David sometimes is brought to tears by his wife’s cooking. Particularly on Fridays, when Yafa cooks the Sabbath dinner for  the family, three generations strong. It can feel like the world joined on one table.

“This is the taste of a Friday night,” says Roni, 61 and owner of a deli in south Tel Aviv. “The food is like a chain. It’s our heritage. It reminds us of where we come from.”

And that is a reflection of the intense diaspora that is Israel today. Yafa’s parents came from Morocco and Libya. Roni’s parents were Kurdish and Georgian. The ancestries marry on the stove.

On Friday, that cooking begins early. Yafa wakes at 6 a.m., heads to the kitchen and cranks up her favorite Middle Eastern music. It’s a day-long labor to prepare the elaborate slow-cooked dishes most treasured by her husband, children and grandchildren.

The Ben-Davids’ son-in-law, Shay Saraf, is half Moroccan and half Indian. He says Yafa’s menu reflects the evolution of families in Israel and the increased mixing of Jewish ethnic backgrounds. While her own mother would never dare stray from her Libyan staples, Yafa has been known to prepare even Tex-Mex and other foods inspired by her world travels. Their home’s decor is equally diverse. Jewish trinkets hang on the walls alongside photos of famous rabbis—and an Elvis Presley clock.

“With each generation your ethnicity begins to blur and the only thing that still keeps that tradition alive is the food,” said Saraf, 36. “But we are also curious. Yafa is multifaceted. She can make anything.”

After 2,000 years of exile, the mass immigration of Jews to the Holy Land before and after Israel’s establishment in 1948 has profoundly changed the nature of Jewish food, both here and around the world. For many, it has broadened the very notion of Jewish.

If brisket, borscht, blintzes and bagels are the stars of the North American Jewish table, they are bit players in Israel, where Ashkenazi Jews of European background make up only about half the Jewish population.

The piquant flavors of the Sephardim, who trace their lineage to the dozens of countries to which Jews were exiled from Spain during the 1492 inquisition, have had a far greater influence on the Israeli diet. Hummus and falafel are considered Israel’s national foods, but it’s the varied smorgasbord of homemade dishes with long lineages that still define many Israeli families.

Tonight’s dinner features a version of the Moroccan chreime, a fish stew with strips of Nile perch marinated in lemon and salt, then cooked in tomato sauce and spiced with garlic, cumin, paprika and caraway seeds. A lemony chicken-green olive stew seasoned with turmeric also traces its roots to Morocco.

There also is Libyan mafrum, potatoes stuffed with ground beef eggs, chopped onions and a touch of cinnamon. And homemade challah bread, a tradition Yafa’s mother brought from Tripoli.

The Ben-Davids are not deeply religious, but Yafa and her daughter, Shirley, nonetheless start the evening by lighting the Sabbath candles at sundown. Roni recites the prayers for the wine and bread, sprinkling salt on each piece and offering a blessing of long life to each family member.

The meal starts with an array of salads, hummus, cabbage, peppers, eggplants and an assortment of olives. There are bourekas, a phyllo dough pastry, and a tender roast beef cooked in mushrooms and parsley. Oshplau, a rice dish with shaved carrots, chickpeas and a head of garlic that originates from the Bukharan Jews of central Asia.

Yafa’s granddaughters—Daniel, 5, and Naama, 4—say their favorite foods are their grandma’s couscous and the Georgian khachapuri bread as well as the khinkali dumplings she prepares.

By the time the dessert of fruit salad, chocolate cake, dried dates with walnuts inside and an assortment of nuts and other dried fruits arrives, the culinary conversation is raging.

Shirley says that while she values the recipes her mother has passed on she is even less bound by tradition. “There really is no such thing as Israeli food. It’s everything, and everything can be made Israeli.”

For Roni, the Friday night dinner is served mostly as a magnet to draw the family together, as food did for all of Israel.

“I know everyone will be here and that’s a good feeling,” he said. “The food connects the family.”