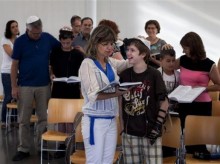 An Israeli woman prays with her son in a Reform Jewish synagogue in Mevasseret Zion. (AP Photo/Sebastian Scheiner)

MEVASSERET ZION, Israel—With the holy city of Jerusalem visible in the background, a man and woman standing side-by-side lead prayers for about 50 congregants who have come to welcome the Sabbath in this suburb’s Reform synagogue.

Their prayer book includes poetry, the women wear prayer shawls, the sermons call for social justice and the songs are performed in a folksy manner to the tune of a live guitar.

This scene, common in liberal synagogues across America, is an anomaly in Israel, where religious life is dominated by a strict ultra-Orthodox establishment that sees such gender-mixing, ordaining of female rabbis and alterations to the traditional prayers as anathema to their way of life and resists any inroads by the more liberal streams of Judaism.

But more liberal Jews now see a crack in that monopoly.

Following a landmark Supreme Court ruling, Israel’s attorney general recently announced that a limited group of 15 non-Orthodox rabbis will begin to receive government funding like some 2,000 of their Orthodox and ultra-Orthodox counterparts.

The Reform and Conservative movements in Israel are celebrating the decision as a watershed. While the two movements dominate American Jewish life, they are largely sidelined in Israel, where they are derided by the Orthodox religious establishment as second-class Jews who ordain women and gays and are overly inclusive toward converts and interfaith marriages. The generous government support for the Orthodox rabbis over the years has added to the marginalization.

The debate boils down to the core of religious life in Israel, and the tenuous relationship between state and religion. It also touches on the essence of the Zionist vision of creating a state that can be both Jewish and democratic.

While most Israelis are secular, Israel’s founding fathers gave Judaism a formal place in the country’s affairs. Ultra-Orthodox rabbis strictly govern Jewish practices such as weddings, divorces and burials.

Their monopoly has often forced Israelis to choose between a secular lifestyle that often ignores Jewish tradition and a stringent religious one dictated by the Orthodox that is often out of sync with democracy and modernity. The current status has also caused tensions with Jews in North America, most of whom identify as Reform or Conservative.

Israel grants citizenship to any Jew, including those recognized by the liberal streams. But once in Israel, those who do not meet the Orthodox standards of being Jewish can suffer. For example, they can be barred from getting married or having a proper Jewish burial. Instead, they must go overseas to marry, and special cemeteries are set up to bury non-Jews.

The liberal streams have long fought for formal recognition, with minimal success. They’ve established synagogues, youth movements, schools and kindergartens. Together, the Reform and Conservative movements have about 100 congregations. A recent survey by the Guttman Center at the Israel Democracy Institute found that 8 percent of Israeli Jews identified as either Conservative or Reform.

But most Israelis, and certainly state institutions, regarded them as a somewhat alien offshoot of Judaism imported from North America and not meshed with how religion was practiced in Israel.

The new decision is far short of a full-throated recognition. The court ruling for the first time classifies Reform and Conservative rabbis as “rabbis of non-Orthodox communities.” But it applies only to 15 heading congregations in farming communities and outlying areas where they were the only rabbis – so they qualified as “community leaders” eligible for state funding. Still excluded are those operating in cities, where Orthodox rabbis are present.

To avoid clashing with the strict state-run rabbinate, the financing will not be done directly from the Religious Affairs Ministry but rather channeled through the Ministry of Culture and Sports. And the 15 won’t be able to serve in state capacities like the rabbinate or the military.

But with a precedent established, liberal streams are now aiming for greater breakthroughs.

Rabbi Gilad Kariv, who heads Israel’s Reform movement, said that together with recent strides toward liberalizing the conversion process, the state funding marked the most significant development to date in breaking down the Orthodox monopoly.

“It is one victory out of many that are needed in order to reach full equality in Israel between the denominations,” he said. “The important thing is that the Israeli government will not be able to say anymore that the non-Orthodox denominations do not deserve equal treatment.”

The precedent was enough to spark outrage from the religious establishment and Orthodox political parties, which wield significant political power and often act as kingmakers in Israeli politics.

Yaakov Margi, the minister of religious affairs from the ultra-Orthodox Shas party, threatened to resign if forced to provide funding. Ultra-Orthodox lawmaker Moshe Gafni accused the legal system of attempting to “undermine the Jewish infrastructure of the state.”

“All of a sudden, there is money for Reform and Conservative clowns for whom Judaism is a mockery,” he said in parliament.

At a charged parliamentary meeting last week to discuss the new funding scheme, an angry Gafni had Kariv removed from the room when he tried to speak.

“I have no problem with heads of these communities getting funding for their cultural activities. My problem is with the state of Israel recognizing them as rabbis,” Daniel Hershkowitz, an Orthodox Cabinet minister, told The Associated Press. “It has been clear for thousands of years how one becomes a rabbi. Just like the state does not decide who becomes a doctor or a lawyer, it shouldn’t be deciding who becomes a rabbi.”

Hershkowitz has demanded an urgent meeting with Prime Minister Benjamin Netanyahu to voice his objections.

The development was made possible thanks to American-born Reform Rabbi Miri Gold, who petitioned the Supreme Court in 2005 and demanded equal financing. Gold, born and raised near Detroit, heads a congregation in Kibbutz Gezer in central Israel. Like other members of the Reform movement, Gold also thinks the state shouldn’t be financing religious institutions at all. But she wasn’t ready to have her tax money go to the ultra-Orthodox while liberal rabbis like herself were barred.

“More and more Israelis are taking back their Jewish identity and realizing that Orthodoxy is not the answer,” said Yizhar Hess, who heads the Israeli Conservative, or “Masorati,” movement. “This is a shift that has yet to materialize in politics, where they have yet to realize that Israeli society is ready for a paradigm shift.”

Liberal rabbis don’t expect the change to happen overnight. “It’s fine with me that there is more demand now for Orthodox rabbis,” Kariv said. “Give me a generation and we’ll change that.”