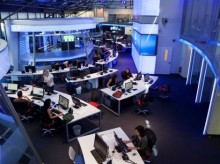 TEL AVIV, Israel (AP) — State-of-the-art TV studios above an ancient Mideast port signal Israel’s arrival in a modern media landscape in which countries increasingly seek to broadcast their own perspective to the world.

Israel advocates have long alleged that their country is portrayed in an unfair and one-dimensional way by the international media, largely as an occupier of the Palestinians.

Now the answer has arrived in the form of i24news — the first international channel dedicated to reporting the news from an Israeli point of view. Its goal is to tell the rest of the Israel story in English, Arabic and French.

The new station’s founders insist they aren’t an Israeli version of the Qatar-funded Al-Jazeera pan-Arab channel. They receive no government funding, hold no political affiliation and pledge to cover the news dispassionately and objectively.

The initiative, which follows dozens of other attempts to tell Israel’s side of the story, highlights a deep-seated sense that Israel is losing the battle over international public opinion and that its voice has been missing from a smorgasbord of news outlets.

“When you are talking about Israel in the international media today, it is only through the perspective of the Arab-Israeli conflict. We have to show that there are a lot of things about Israel that people don’t know about,” said Frank Melloul, the channel’s chief executive. “What I want to do with this channel is to connect Israel to the world and connect the world to the Israeli reality.”

To do so, i24news broadcasts around the clock, devoting 30 percent of its content to local coverage, including culture, technology and sports.

Its spacious studios in Jaffa, an ancient port city merged with Tel Aviv, include three glass-encased sets for simultaneous broadcasts in three languages, along with an integrated news desk for its 150 journalists.

The station went on the air less than two weeks ago, and most of the office space is still under construction. Though it is not yet clear how many people are watching, i24news says it can potentially reach 350 million households via cable and satellite operators in Europe, Asia and Africa. An expansion to the North American market is expected in early 2014.

The Israeli effort is funded by private money. Much of it comes from Patrick Drahi, a French-Israeli telecom tycoon who owns HOT, an Israeli cable network of TV channels and telephone service providers.

“We are not talking about propaganda,” he said, “(But) it is time to listen to another voice from the Middle East besides Al-Jazeera.”

Walid Omary, Middle East bureau chief of the pace-setting and influential Al-Jazeera, said he was not familiar with the new station, but he welcomed the competition and considered it a compliment that others were trying to emulate his network.

“Apparently Al-Jazeera has a quality that everyone wants to challenge,” he said. “Even those who criticize us recognize we have an impact.”

Israel accuses Al-Jazeera and others of endorsing the Palestinian and Arab narrative, providing slanted coverage of the Mideast conflict and contributing to anti-Israel sentiment. Such allegations become more heated during bouts of Israeli-Arab fighting.

Al-Jazeera denies it is biased against Israel.

Israel’s critics argue that it needs to change its policies toward the Palestinians rather than look for more sophisticated tools in a propaganda war.

Others believe that the premise that news media are overwhelmingly anti-Israel is overstated. Israelis and their backers abroad are highly sensitive to criticism and tend to label any coverage that is less than totally supportive as anti-Israel — though Israel’s own local media are frequently harder on their country and government than foreign outlets are.

i24news, particularly its Arabic broadcast, looks to show a different face of Israel by highlighting its diversity. The channel’s main English-language anchor, for instance, is an Arab woman.

The content also tries to spotlight the tough choices the country faces.

A report about an Israeli Cabinet vote this week to release Palestinian prisoners ahead of renewed peace talks was followed by an in-studio debate between two parents over whether the killers of their children should be freed in return for the prospect of peace.

“It is part of the diversity of the Israeli society, and it is part of also showing the world that nothing is easy,” Melloul said. “You can discover another face of Israel you don’t see anywhere else in the world.”

Even without direct influence, Israeli officials are predictably pleased.

Nitzan Chen, the head of the government press office, said such an outlet has been “definitely missing” and wished the new station success.

Marcus Sheff of The Israel Project, a pro-Israel advocacy group, said that a broadcaster that “does not instinctually bash Israel is probably a good thing.”

Tal Azran, a professor of communications at Interdisciplinary Center Herzliya, a college north of Tel Aviv, said the backing of private sponsors with ideological motivations represents a new breed in global news.

“i24news is part of a larger trend in international media where more and more countries, rulers and governments have begun to understand that international news reporting can be highly influential on what we call global public opinion,” said Azran, who has written extensively about the effect of Al-Jazeera. “It has almost become something that every country ‘must have.'”

Given Israel’s prominence in current affairs, he said i24news would likely become part of the new media marketplace, where consumers shop for several different perspectives before forming their own opinions.

“During operations in Gaza, for instance, those seeking the Israeli voice may tune into i24news,” he said. “What’s the Israeli angle? No one has ever heard it before on television.”