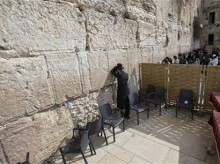 JERUSALEM (AP) — The Israeli government’s decision to allow non-Orthodox Jewish prayer at Jerusalem’s Western Wall is a major breakthrough for the country’s long-marginalized liberal streams and their powerful supporters in the United States.

But the compromise agreement also highlights the deep rift between the world’s two largest Jewish communities over how religion should be practiced in the Jewish state, where ultra-Orthodox control is entrenched over religious life.

Progressives celebrated Sunday’s Cabinet vote in favor of building a new $9 million plaza for mixed-gender prayer at the Western Wall as a historic, formal recognition of the Reform and Conservative movements that dominate American Jewish life but are largely sidelined in Israel.

Still, ultra-Orthodox rabbis strictly govern Jewish practices in Israel such as weddings, divorces and burials. The Orthodox religious establishment sees itself as responsible for maintaining traditions through centuries of persecution and assimilation, and it resists any inroads from liberals it often considers to be second-class Jews who ordain women and gays and are overly inclusive toward converts and interfaith marriages.

The government decision followed decades of efforts by liberals to have a greater stake at the site.

Noa Sattath, head of the Israel Religious Action Center, a group that promotes religious pluralism in Israel, said she was “thrilled” about the symbolic foothold at the Western Wall, a remnant of the ancient Jewish Temple complex and the holiest site where Jews may pray.

“That is the model that we’re looking for in all spheres of Jewish life in Israel, for people to have one place where they can choose different types of Jewish experiences,” she said. “We see it as a first step to equality and religious pluralism … that will make all Jews feel welcome in Israel.”

There’s still a long way to go. The ultra-Orthodox establishment has significant political power and maintains a monopoly over daily Jewish life. That has forced many Israelis to choose between a secular lifestyle that often ignores Jewish tradition and a stringent religious one dictated by the Orthodox that is often out of sync with democracy and modernity.

The divide is particularly vexing for converts and immigrants who do not meet Orthodox standards. For example, they can be barred from getting married or having a proper Jewish burial. Instead, they must go overseas to wed, and special cemeteries are set up to bury non-Jews.

The liberal streams have made strides in recent years, establishing synagogues, youth movements, schools and kindergartens, and Israel’s secular majority has become more accepting. But they still have very little political backing, and authorities have generally tended to regard them as a somewhat alien offshoot imported from North America that does not mesh with how religion is typically practiced in Israel.

Rabbi Uri Regev, who heads the religious equality group Hiddush, said that beyond questions over its implementation, he worried the new prayer complex agreement would create a false appearance of equality and take pressure off the government to press Orthodox authorities to make more significant concessions.

“While everyone connected to the agreement is rejoicing and claiming victory, what this in essence will do is weaken the movement to effectively fight for the larger picture of religious freedom,” he said. “On the major issues, like the right to a family, we have been set back rather than moved forward.”

The new prayer site is tough to accept for the ultra-Orthodox, who consider the sight of women carrying Torah scrolls and wearing religious articles traditionally reserved for men to be a provocation. But it didn’t require them to give up any actual power, and it will be built separately from their prayer plaza where their rituals will remain intact.

Amid pressure from influential U.S. Jewish groups, Prime Minister Benjamin Netanyahu appointed a committee in 2013 to seek solutions for non-Orthodox prayer at the Western Wall. Shortly after, a temporary prayer platform was erected for mixed-gender prayer, but advocates say it was not an official site and was not always open.

Rabbi Steven Wernick, chief executive of the United Synagogue of Conservative Judaism, the North American centrist movement that has ordained women for three decades, credited Netanyahu for recognizing the significance of the issue for American Jews but also noted continuing obstacles to religious pluralism in Israel.

When it comes to administering conversions, earmarking budgets and loosening their grip on religious affairs, ultra-Orthodox groups are unlikely to make any compromises. Following the Cabinet vote, Moshe Gafni, a leading ultra-Orthodox lawmaker, called Reform Jews “clowns” and said he would never recognize them.

That Netanyahu managed to push forward the Western Wall agreement over the opposition of key ultra-Orthodox and religious nationalist elements in his own government owes mostly to his desire to satisfy American Jews, who have long lamented that Israel should be as accepting of their religious practices as they are of their financial support. Amid the long-simmering tensions, Netanyahu was eager to deliver a tangible result that assuaged American Jewish concerns.

“The prime minister at the end is the prime minister of all Jews in Israel and he also has a very important relationship with Jews of the Diaspora. It’s totally clear that the most minimal step of giving access to every Jew according to his views and beliefs in this holy place is the most basic thing that is required,” said Yedidia Stern of the Israel Democracy Institute think tank. “There is a good chance that this will remove at least one obstacle from the complex relationship today between Jews in the Diaspora and the state of Israel.”