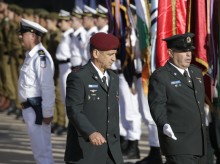 JERUSALEM (AP) — Israel’s new military chief took office Tuesday, pledging to lead a “lethal, efficient and innovative army” into the future as it faces grave challenges along its borders.

Lt. Gen. Aviv Kochavi’s inauguration comes shortly after the military’s announcement that it has successfully completed its operation to destroy a network of cross-border tunnels dug by the militant group Hezbollah, stretching from Lebanon into Israel, and as it appears to be dropping its ambiguity over hundreds of strikes it had carried out against Iranian forces in Syria in recent years.

Kochavi was promoted from major-general at Tuesday’s ceremony at the military headquarters in Tel Aviv, becoming the country’s 22nd military chief. He replaces Lt. Gen. Gadi Eisenkot, who is retiring after 40 years of service. Israel’s army chiefs usually serve up to four years.

“I pledge to dedicate all my energy to a demanding and critical approach to strengthening our defenses and adjusting it to the challenges of the present and future by focusing on increasing our striking abilities against our enemies and putting forth a lethal, efficient and innovative army that maintains its purpose and uniqueness,” he said.

In his final week on the job, Eisenkot oversaw the discovery of what the military says was the sixth and final Hezbollah tunnel to penetrate Israel. He also divulged that Israel had struck thousands of Iranian targets as part of a policy shift of engaging Iran directly, instead of just its lesser proxies of Hezbollah in Lebanon and Hamas in Gaza.

Israel has long called for a crackdown on the Iran-backed Hezbollah — a heavily armed militia that functions as a mini-army and is believed to possess an arsenal of some 150,000 rockets that can reach nearly all of Israel. In recent years, Hezbollah has been bogged down in fighting in Syria on behalf of Syrian President Bashar Assad’s government. But with that war winding down, Israeli security officials fear Hezbollah is refocusing its attention on Israel.

“In front of us stands one major element — Iran and its terror proxies. We have acted responsibility and sensibly to thwart the strengthening of those who seek to harm us,” he said. “I heard yesterday the spokesman of the Iranian foreign ministry saying: ‘Iran has no military presence in Syria, we only advising.’ Well, I advise them to get out of there fast since we will continue our aggressive policy there as we have promised and we are doing, relentlessly and without fear.”

Kochavi and Eisenkot will compete their handover with a visit to Jerusalem’s Western Wall, a lunch with the president and a joint meeting of the general staff.

The 54-year-old Kochavi previously served as commander of military intelligence, chief of northern command and most recently as Eisenkot’s deputy chief of staff. He also commanded the Gaza division during Israel’s 2005 withdrawal from the Gaza Strip.

As a commander of the paratroopers’ brigade in the early 2000s, he was credited with developing a tactic of using hammers to break down walls between homes in Palestinian refugee camps in the West Bank, to rob snipers of vantage points from where they could shoot at Israeli troops on the streets.