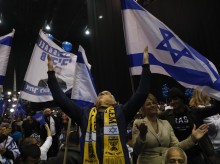 A supporter of Israeli Prime Minister Benjamin Netanyahu wears a mask with his likeness as he celebrates the first exit poll results for the Israeli election. (AP Photo/Ariel Schalit)

JERUSALEM (AP) — Prime Minister Benjamin Netanyahu’s political future remained up in the air Tuesday as preliminary results and exit polls from Israel’s third election in under a year indicated the embattled leader would fall short of securing the parliamentary majority needed to form a new government.

Netanyahu, set to go on trial on corruption charges in two weeks, claimed victory after exit polls projected his Likud party as the largest faction in parliament in Monday’s election. But while exit polls and preliminary results appeared to give him a boost, they also signaled that a year-long political deadlock is far from over.

With 93% of the votes counted, preliminary official results showed that the Likud and its religious and nationalist allies had 59 of 120 seats in parliament, two seats short of the hoped-for majority. Exit polls on Israeli TV stations also indicated the Likud-led bloc would capture 59 seats.

Final results were expected Wednesday after officials counted several hundred thousand votes cast by Israeli soldiers and some 4,000 ballots cast by Israelis confined to home quarantine after possible exposure to the coronavirus.

Orly Ades, head of the Central Election Committee, said it was unable to find volunteers willing to count the coronavirus ballots.

She told Channel 13 TV that she and other members “have taken it upon themselves” to count the ballots Wednesday in a special tent erected outside the Knesset. Committee members will wear protective gear.

Even if Netanyahu falls short of a majority, he appears to hold the upper hand as rival political camps try to end the deadlock that has paralyzed the political system for over a year.

According to the preliminary results and exit polls, Likud was singlehandedly projected to win 35 to 36 seats, placing it well ahead of the 32 seats projected to go to the rival Blue and White party, led by his main challenger, former military chief Benny Gantz.

Although Netanyahu’s opponents together were projected to hold a 61-seat majority, they are deeply divided. They include a predominantly Arab party and a secular ultranationalist faction that has ruled out any alliance with Arab politicians, making it unlikely they will unite.

Whether Netanyahu could use this advantage to form a new government remains to be seen.

Moving quickly, Netanyahu met Tuesday with his smaller allies to try to project business as usual. Likud said the various parties agreed to remain together as an alliance, but also left the door open to other partners.

If the final results match the exit polls, Netanyahu would have several options.

Jonathan Urich, a Netanyahu aide, said Likud was already working to poach defecting lawmakers from the opposition. “I expect that fairly shortly we’ll have the missing votes,” he told Israel’s Army Radio.

Yohanan Plesner, president of the Israel Democracy Institute think tank, and himself a former lawmaker, said persuading opponents to defect would not be easy. Lawmakers who switch sides can face sanctions, and the resulting coalition would likely be narrow and unstable.

“Mr. Netanyahu’s path to introducing a new government is not that clear and is not secure,” Plesner said.

Another path would be for Likud and Blue and White to put aside their differences and form a broad unity government. Together, they are projected to control a solid majority.

On the campaign trail, Gantz repeatedly ruled out a unity government led by Netanyahu, saying the prime minister is unfit to rule at a time when he is going on trial. Netanyahu insists he head any unity pact.

Gantz and other anti-Netanyahu forces could still eke out a narrow “blocking majority” and force yet another election. But a weary public is largely against that option.

Blue and White officials met late Tuesday to discuss their options. Afterward, Gantz said they are still waiting for final results and they will “do everything that the results and the law allow to change the government.”

Netanyahu is eager to form a government before his trial begins March 17.

He has been charged with fraud, breach of trust and accepting bribes for his actions in a series of scandals that included accepting lavish gifts from wealthy friends, and allegedly offering favors to media moguls in exchange for positive press coverage. Netanyahu denies wrongdoing.

Netanyahu is expected to use his position to lash out at his prosecutors and rally public support. If he forms a new government, he might also seek ways to delay or derail the proceedings.

In the meantime, the timing of the trial could complicate the formation of the next government.

Under Israeli law, the president is responsible for designating a prime minister, choosing the candidate deemed to have the best chance of forming a coalition after several days of consultations with the various political parties.

His choice is usually, but not always, the leader of the largest party. President Reuven Rivlin’s office said he would begin the consultation process on March 10, meaning his decision on a prime minister-designate could come just as Netanyahu’s trial is beginning.

While there is nothing legally to prevent him from tapping Netanyahu, the optics of choosing a politician on trial for alleged corruption could create some discomfort.

The Supreme Court also is expected to be asked to look at the question of whether an indicted politician is even allowed to form a coalition government, adding another potential obstacle to the process.

Addressing his supporters early Tuesday, Netanyahu made no mention of his legal woes. Instead, he declared a “huge victory” and vowed to press ahead with his hard-line agenda. That includes annexing large parts of the occupied West Bank — a step that would antagonize much of the international community and undermine any remaining hopes of establishing a Palestinian state.

Regardless of the final outcome, the election seemed to mark a devastating setback for Gantz’s Blue and White party and its allies on the center-left, who had grand ambitions to topple Netanyahu after more than a decade in power.

Maverick politician Avigdor Lieberman, whose party is projected to win seven seats, once again looms as a key player. Speaking Tuesday, he repeated his campaign pledge that there won’t be a fourth election but gave no indication which side he would support.

The Joint List, an alliance of Arab-led parties, also emerged as a major player.

The party is projected to control 15 seats, which would make it the third-largest faction in parliament and position its head, Ayman Odeh, to be opposition leader if Gantz and Netanyahu form a unity government. It would be the first time an Arab politician has held the position.

“We must be the moral alternative for the entire Israeli political map,” Odeh said Tuesday.