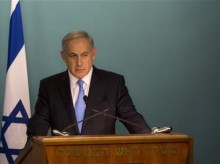 Holocaust experts and survivors slammed Netanyahu’s comments as historically inaccurate and serving the interests of Holocaust deniers by lessening the responsibility of Adolf Hitler and the Nazis. Critics also said the statement amounts to incitement against modern-day Palestinians in the midst of a wave of violent unrest and high tensions.

Speaking to a group of Jewish leaders Tuesday, Netanyahu tried to use a historical anecdote to illustrate his claim that Palestinian incitement surrounding Jerusalem’s most sensitive holy site goes back decades. He has repeatedly said that a wave of Palestinian attacks in recent weeks is the result of decades of hatred, and not connected to Israel’s 48-year occupation of lands claimed by the Palestinians, as the Palestinians have claimed.

Netanyahu said al-Husseini played a “central role in fomenting the final solution” by trying to convince Hitler to destroy the Jews during a November 1941 meeting in Berlin.

“Hitler didn’t want to exterminate the Jews at the time, he wanted to expel the Jews,” Netanyahu told the group. “And Haj Amin al-Husseini went to Hitler and said, ‘If you expel them, they’ll all come here.’ ‘So what should I do with them?’ he asked. He said, ‘Burn them.'”

Details of the meeting between al-Husseini and Hitler are sketchy. The Nazis released a grainy propaganda video showing the mufti making a Nazi salute before a warm handshake. The official record from the meeting says Hitler pledged “the annihilation of Jewry living in Arab space.”

While the Nazis’ official endorsement of the Final Solution came months after the meeting, historians note that the Nazis’ mass killing of Jews was already well underway.

Several concentration camps were up and running, and Hitler had previously repeatedly declared his lethal intentions for the Jews. If anything, they said it was the Nazis who were trying to use al-Husseini for their own propaganda interests and that Hitler didn’t need any outside inspiration. When Hitler did consider deporting Jews, it was in the context of sending them to countries like Ukraine and Lithuania where they would face persecution or death.

Moshe Zimmermann, a prominent Holocaust and anti-Semitism researcher at the Hebrew University in Jerusalem, said Netanyahu made a “far-reaching argument” that didn’t hold up.

“Any attempt to deflect the burden from Hitler to others is a form of Holocaust denial,” he told The Associated Press. “It cheapens the Holocaust.”

Al-Husseini was an enthusiastic Nazi supporter who helped recruit Bosnian Muslims to their side and whose anti-Semitism was well documented. But Zimmermann called him a “lightweight” who was pleading with Hitler for assistance in getting rid of the British Mandate and the Jewish immigrants coming to the Holy Land. He said there was no evidence al-Husseini had any real influence on Hitler. Records show that at the meeting, Hitler turned down a request to form a formal treaty.

Dina Porat, the chief historian at the Yad Vashem Holocaust memorial, said that al-Husseini’s goal was to have Hitler include the Jews of Palestine in his extermination plans.

“Still, this does not mean that he was the one who gave Hitler the idea to get rid of the Jews,” she said. “He didn’t need the mufti in order to have the idea.”

Netanyahu has long been criticized for invoking the Holocaust when talking about current affairs, alluding to it especially when discussing Iran and its nuclear program. The son of a historian, Netanyahu also has a record of slipping up when citing historical facts.

The prime minister’s comments came at a particularly sensitive time, as he travelled to Berlin Wednesday for meetings with German Chancellor Angela Merkel. Netanyahu tried to calm the uproar and clarify himself prior to his departure.

“I had no intention of absolving Hitler of his diabolical responsibility for exterminating European Jews … at the same time, it is absurd to ignore the role the mufti played,” he said, adding that it was tied directly to Palestinian sentiments today.

“The father of the Palestinian nation then, without a state and without what is called ‘occupation,’ without the territories and settlements, was involved then in serial incitement to destroy the Jews,” he said. “Unfortunately, Haj Amin al-Husseini is still an admired figure in Palestinian society.”

Husseini is admired among a small group of older, well-educated Palestinians as someone who fought the British and Jewish immigration to Palestine. But the vast majority of Palestinians, particularly the younger generations, have little or no idea who he is.

Speaking at a press conference Wednesday afternoon with Netanyahu in Berlin, the German Chancellor said, “We are aware of the responsibility of the National Socialists for the break with civilization that was the Shoah. We are firmly convinced that this is something that needs to be passed down for generations to come, for example in school instruction, so we don’t see any reason to change our view of history — particularly in this case — and we abide by our responsibility as Germany for the Holocaust.”

Netanyahu is also set to meet U.S. Secretary of State John Kerry in Berlin in new efforts to bring an end to a monthlong wave of attacks that have raised fears that the region is on the cusp of a new round of bloodshed.

Netanyahu has repeatedly accused Palestinian President Mahmoud Abbas of inciting the violence, while Palestinians say years of Israeli occupation are at the root of the unrest.

Speaking alongside Merkel, Netanyahu said the Palestinians officially consider the Mufti as a “Palestinian icon.”

“The question that has to be asked to President Abbas is why you lionize Haj Amin al-Husseini, the Mufti of Jerusalem, the war crime collaborator of the Nazis,” Netanyahu said.

In Israel, many quickly accused Netanyahu of going overboard.

Opposition leader Isaac Herzog called it a “dangerous historical distortion” that plays into the hands of Holocaust deniers.

“It downplays the Holocaust, Nazism and the role of Adolf Hitler in the great tragedy of our people,” he said.

Colette Avital, who heads the umbrella organization of Holocaust survivors, said survivors were baffled and Zehava Galon, head of the dovish Meretz party, noted that her ancestors were killed months before Hitler and the mufti even met.

“To what depths will this man stoop?” Galon said. “He who can’t act to change the future, all he has left is to rewrite the past.”

Even Netanyahu’s loyal defense minister, Moshe Yaalon, distanced himself from the comments, saying that “history is actually very, very clear.”

“Hitler initiated it, Haj Amin al-Husseini joined him and unfortunately the jihadist movements promote anti-Semitism to this day, including incitement in the Palestinian Authority that is based on the legacy of the Nazis,” he told Israel’s Army Radio.

“It is a sad day in history when the leader of the Israeli government hates his neighbor so much so that he is willing to absolve the most notorious war criminal in history,” said senior Palestinian official Saeb Erekat.

He sidestepped the Palestinian role in World War II, claiming that “Palestinian efforts against the Nazi regime are a deep-rooted part of our history.”

At a meeting with the visiting U.N. chief Ban Ki-moon, Palestinian President Mahmoud Abbas accused Netanyahu of trying to rewrite history. “Now he says Hitler is not responsible,” he said.

In a Ph.D dissertation, Abbas questioned the extent of the Holocaust, drawing accusations that he was a Holocaust denier. He has since distanced himself from the claims, calling the Holocaust a “despicable crime.”