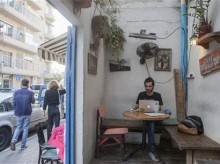 An Israeli man appears in a cafe in the Florentin neighborhood of Tel Aviv, Israel. (AP Photo/Dan Balilty)

TEL AVIV, Israel (AP) — Your typical Tel Aviv tourist will naturally navigate toward its famous beaches, boulevards and Bauhaus buildings. But if it’s people- (and dog-) watching that you fancy, nothing tops an afternoon or evening stroll in the neighborhood of Florentin.

Nestled between the ancient biblical port of Jaffa and Tel Aviv’s first Jewish neighborhood — the better-known and long-gentrified Neve Tzedek — Florentin is renowned as Tel Aviv’s bohemian bastion and has drawn comparisons to Berlin’s Kreuzberg and New York City’s Lower East Side. It’s a hub of creative activity and a hipster’s paradise featuring tattoo parlors, vegan kiosks and a Bedouin cafe. You’ll likely see a wide assortment of dogs and perhaps the most impressive collection of non-ultra-Orthodox Jewish beards the country has to offer.

Even in a city ranked among the most gay-friendly in the world, Florentin is a magnet for Israel’s LGBT community as an artist’s colony with a distinct countercultural sensibility.

Like other parts of the once-gritty south side of Tel Aviv, Florentin is going through an accelerated gentrification. Along the main Florentin street you’ll find crumbling buildings alongside newly renovated ones, with elderly shoemakers and merchants selling mattresses next to trendy art galleries. The neighborhood really comes alive at night, as outsiders frequent a wide selection of hopping bars that stay open all night long. The Casbah, Hoodna and Perla are probably the best known. Those in the mood for a less grungy experience should try Bugsy or Florentin 10.

Named for David Florentin, a Greek Jew who purchased the land in the late 1920s, the neighborhood retains remnants of its immigrant, working-class roots. Even with a mostly young, secular population, some of Florentin’s old synagogues still hold services. The Levinsky outdoor market, offering olives, nuts and spices, is just a stone’s throw away (as is “Bar Mitzvah,” the aptly named watering hole).

Aside from the pharmacy and supermarket, you won’t find chain stores in Florentin. Cafes maintain a local feel, with the occasional scent of pot. Off the main drag, carpentry workshops still thrive despite the ever-growing reach of developers.

Florentin owes much of its local reputation to a popular 1990s TV series by the same name about a group of young Israelis struggling to get by in the neighborhood. The show helped launch the career of Ayelet Zurer (Avner’s wife in Steven Spielberg’s “Munich,” Tom Hanks’ sidekick in “Angels & Demons” and Superman’s mom in “Man of Steel”) and made Florentin a brand name, spiking its real estate prices.

The most obvious feast for the eyes during a visit to Florentin is the elaborate graffiti and street art splattered across almost every building. Some will be easy to recognize, like Homer and Mr. Burns from “The Simpsons” and a large mural featuring images of Jim Morrison, Kurt Cobain, Amy Winehouse and other members of the infamous “27 club” (musicians who died at that age). But to uncover the hidden gems and decipher their cryptic messages, you’ll need the help of Guy Sharett, Florentin’s resident “cultural mediator,” who runs a popular series of urban culture and graffiti tours.

A linguist by trade, he’ll teach you some Hebrew phrases, give you the lowdown on the ceramic ducks around the neighborhood and help you identify the scattered works of mysterious artists such as Mr. Leaf and The Eggplant Kid. Sharett says the graffiti, though not officially sanctioned by the municipality, is “tolerated” as part of what gives the neighborhood its unique character.

“There’s something about the energy here that you don’t have anywhere else in the city,” he said. “Florentin is an island that allows you to be all kinds of things that are not defined.”

For a different kind of Tel Aviv experience, it’s well worth a visit.

THE CASBAH: A bar-restaurant-cafe that has art exhibitions and a menu that looks like a newspaper magazine; Florentin 3.

DIWAN: A Bedouin cafe offering a variety of teas and the occasional musical performance; Abarbanel 14.