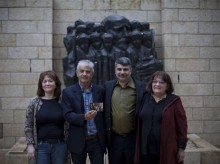 JERUSALEM—For five long years during World War II, Nahum Korenblum never left the side of his younger brother Yaakov as the two fled the Nazi invasion of Poland, escaped forced labor camps across Europe and ultimately joined the Soviet Red Army. There, they were separated and dispatched abroad, never to meet again.

On Thursday, more than a decade after they died, their children were united at Israel’s Yad Vashem Holocaust memorial thanks to a recently uploaded family photo discovered on its comprehensive online database of Holocaust victims.

It was just the latest successful byproduct of the memorial’s database, established years ago as a means of commemoration aimed at gathering the exact names of all the 6 million Jewish victims of the Nazi genocide. But since the database went online in 2004, it has become a powerful genealogy tool that has led to hundreds of emotional reunions of long lost families.

In 1958, shortly after Yaakov moved to Israel, he and his wife filled out a page of testimony at Yad Vashem commemorating his dead parents. Nahum had meanwhile settled in Ukraine, where his surname was mangled into Koramblyum. For the rest of their lives, the brothers searched for each other in vain, the paper trail often coming to a dead end because of the differing spellings of their names.

In 2006, Yaakov’s daughter, Bracha Fleishman-Korenblum, updated the online entry, attaching an old black-and-white photo of her grandparents and four of their children — including Nahum and Yaakov.

Two months ago, one of Nahum’s American grandchildren stumbled upon the entry and was shocked to recognize his grandfather in the picture. He reached out to the Korenblum clan in Israel and a reunion was put into motion.

This week, Gennadiy Koramblyum, of Queens, New York, and his son, who is named after Yaakov, arrived in Israel for the wedding of one of their newly discovered relatives.

“It was joy, I cried, I didn’t sleep for two nights,” Gennadiy Koramblyum said. “Since I was a little boy, I remember my father told me ‘I have another brother, he is somewhere.’ He said ‘I always held him in my hands, I never let anyone separate us.'”

Koramblyum’s father moved with the family to the United States in 1991 and he died there in 1997. Yaakov passed away in Israel four years later.

“I am sure they are happy now upstairs seeing us all here together,” Koramblyum said, shaking. “This means everything to me.”

His Israeli cousin shared that sentiment, saying the children’s joy was mixed with sorrow that their fathers never managed to reunite.

“It’s sad, but they meet in heaven,” said Rafael Korenblum, who bears a striking resemblance to his late father Yaakov. “A circle has been closed. There was something unresolved all these years, it lingered and now there is closure.”

Cynthia Wroclawski, the manager of Yad Vashem’s name recovery project, said such breakthroughs are being made possible by the increased openness of aging survivors and the curiosity and tech-savvy of their descendants.

“The lock is being opened by the younger generation. They have more intuition and more interest,” she said. “That’s the power of the database, the torch of memory is being passed.”

The project began in 1955 and had reached 3 million confirmed names by the time the online database was launched. More than a million more names have been added in the seven years since.

Efforts are continuing, primarily in eastern Europe, where name collection is particularly difficult because Jews there were often rounded up, shot and dumped in mass graves without any documentation. The names of Jews killed at German death camps, on the other hand, are easier to collect because of meticulous Nazi records.

The information can be accessed online in English, Hebrew and Russian. Yad Vashem actively encourages survivors and their kin to come forth and fill out pages of testimony for those killed, before their names and stories are lost forever.

“We are not giving up, there is still much more to do,” Wroclawski said. “For these families, you see the rift of the Holocaust is getting smaller and that some kind of healing process is taking place.”