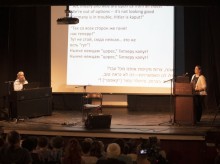 TEL AVIV, Israel (AP) — In a musty basement hall of an unassuming building nestled among modern high-rises in the heart of Tel Aviv, a few hundred spectators are kindly requested to turn off their cellphones. What makes the typical scene surreal is that they are asked to do so in Yiddish — the playful, lyrical language of Diaspora European Jews.

In its first performance in Israel, a Grammy-nominated concert had arrived to play the lost songs of lost Jews in a nearly lost language. More than 70 years after the purged poems of Holocaust survivors, victims and Jewish Red Army soldiers were first composed and curated, a Canadian historian has brought back to life works thought to be long gone.

The result is “Yiddish Glory,” a collection of songs describing the harrowing World War II experience of Soviet Jews. Even amid the horrors of the Holocaust, Jewish musicians created a vibrant cultural life in camps and ghettos, with the arts providing a refuge, a sense of meaning and even a form of resistance.

“The last thing a lot of Yiddish speaking people did was to write a song,” said Anna Shternshis, the University of Toronto professor behind the project. “Before Yiddish was killed, it was sung.”

As the war raged, a group of Soviet Jewish ethnomusicologists led by Moisei Beregovsky recorded hundreds of Yiddish songs detailing the Holocaust and Jewish resistance to fascism as part of an effort to preserve the fast-diminishing Jewish culture of the 1940s. Beregovsky planned to publish an anthology after the war, but the project was shut down in 1949 at the height of Stalin’s anti-Jewish purge and Beregovsky was arrested on suspicion of promoting Jewish nationalism. His documents were seized and he died thinking his work had been destroyed.

Only after the fall of the Soviet Union did a librarian stumble upon 15 unmarked boxes containing the collection. She catalogued them, but it was another decade before Shternshis came upon the trove of handwritten poems in the Ukrainian National Library as she was conducting research for her dissertation on prewar Jewish culture in the Soviet Union.

Instead of writing what she called “another boring book,” Shternshis decided to put them to song with the help of Russian-American musician Psoy Korolenko, who was responsible for what he called “melodic solutions” to the newly discovered lyrics.

While some of the poems had suggested notes, Korolenko had to tap into his musical knowledge of the times to create appropriate tunes for the others. He called their unusual collaboration “musical archaeology,” and believed the original authors would be proud to see their works come to life.

“These are not private diaries. These are songs. Songs are supposed to be sung before people,” he said before the Tel Aviv performance. “These people were not expecting anyone to hear them ever because they were preparing to die.”

Shternshis says the songs themselves depict the times in graphic detail — describing, for instance, what Jews wished to do to German soldiers — and for their hatred of Hitler and praise of Stalin, who only years later would turn on his own Jewish population.

The concert opened with “Babi Yar,” based on a likely eyewitness account of the notorious 1941 massacre of more than 33,000 Jews in a ravine outside Kiev that became a symbol of Nazi evil.

“What hardships we’ve endured! What kind of great evil decree is this?” reads the poem. “Oh, from this misfortune, so many have fled. The ones left are lying in Babi Yar.”

“Yoshke From Odessa” tells the story of a Jewish soldier in the Red Army — one of half a million — who slices his enemies into pieces like a butcher. “My Machine Gun” invokes the pride another otherwise helpless Jew felt at being armed, set against a Klezmer tune.

Such songs were later used as evidence against Beregovsky, who was punished for focusing on the Jewish victims of the Nazis, instead of the communist narrative that all Soviet citizens were equal victims. Of the 6 million Jews killed in the Holocaust, 2.4 million were killed on Soviet soil. An additional 300,000 either died in combat or during evacuation, Shternshis said.

“I think about these people who so rarely get to tell their stories in their own words. It’s always translated and purified and explained. But here I don’t touch them. This is what they say. I just let them speak,” she said. “It’s interesting to bring someone back from the dead.”

The project is also part of current attempts to resurrect the Yiddish language. Much of the world’s Yiddish speakers perished in the Holocaust and those who survived often refrained from speaking it publicly again because of anti-Semitism. In the Soviet Union, it was viewed suspiciously.

Even in the new state of Israel, the language was discouraged, as early Zionists sought to rally the new nation around modern Hebrew and leave the symbols of the Diaspora behind. It has mostly survived in pockets of the ultra-Orthodox community and has recently enjoyed a revival among secular progressives who’ve created cultural organizations and launched a Yiddish theater.

“Yiddish never fully stopped. It always went on,” said Korolenko, who regaled the audience with his nostalgic singing and piano playing. “Yiddish has never been a dead language, even in the 20th century when it was in so much danger.”

For Shternshis, holding the performance in Israel had extra significance.

“The people who sang these songs all dreamt of Israel, but nearly none got to see it created,” she said. “They couldn’t make it, but their music made it.”