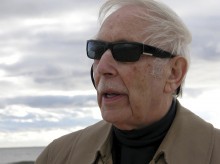 David Toren, who died on April 19, 2020 in his Manhattan home from symptoms of the coronavirus at the age of 94. He escaped Germany on the eve of World War II before his family perished, served in the Israeli pre-state militia and then built a successful law practice in New York City, narrowly escaping the 9/11 attacks. (Peter Toren via AP)

TEL AVIV, Israel (AP) — With the Nazis murdering Jews and ransacking their property outside on the infamous nights of Kristallnacht in 1938, 13-year-old David Toren sat in the sunroom of his wealthy great-uncle in Germany admiring a favorite painting depicting two men on horseback on a beach.

Within a year, Toren would be smuggled out in one of the final Kindertransports, a series of rescues for Jewish children organized by several European countries. Left behind, his family would perish in the death camps and their vast art collection would be seized by Nazis and later traded by unscrupulous dealers.

Toren would serve in the Israeli pre-state militia before moving to America with less than $100 to his name. He went on to build a successful law practice with an office on the 54th floor of the World Trade Center. Many of the early-life possessions he kept there were destroyed in the 9/11 attacks, carried out before he arrived to work that day.

But even as a degenerative eye condition robbed him of his sight later in life, the images of his past never escaped him, and he embarked on a quest to reclaim some of what was lost. He sued the government of Germany for his great-uncle’s collection and in 2015, after a lengthy saga, recovered the Max Liebermann work “Two Riders on the Beach” that so moved him in his youth.

“He regarded it as justice and felt very strongly about it,” said his son, Peter Toren. “The art is something that was taken from his family and it was something there was a possibility of getting back. He couldn’t get back all the lives that were exterminated.”

Toren died on April 19 in his Manhattan home from symptoms of the coronavirus. He was 94. He left behind his son Peter and two grandchildren.

EDITOR’S NOTE: This is part of an ongoing series of stories remembering people who have died from coronavirus around the world.

Born Klaus-Gunther Tarnowski in Breslau, now part of Poland, Toren and his family at first seemed immune to the rise of the Nazis. His father, a decorated World War I veteran, was a prominent lawyer who was allowed to practice even after the Nazis forbade most Jews from doing so and he published poetry and wrote plays that were performed at local theaters.

But eventually he too was taken away to a concentration camp and came back three weeks later “a broken man,” according to Peter Toren. He and his wife eventually died in Auschwitz.

Toren’s great-uncle, the wealthy Jewish industrialist and art collector David Friedmann, was forced to flee and the Nazis pillaged his extensive collection. Many of the works ended up in the hands of Hildebrand Gurlitt, a notorious German art dealer who traded in what the Nazis called “degenerate art” — works deemed inferior because they were un-German, Jewish or Communist or, as is the case with Impressionist and other Modernist works, did not employ traditionally realistic forms. Still, they were happy to sell the works to help fund their war machine.

Much of Gurlitt’s collection remained unseen for decades and experts feared they had been lost or destroyed. But a vast horde resurfaced by surprise in 2012 when German authorities raided a Munich apartment belonging to his son Cornelius while investigating him for tax evasion. Paintings by artists including Claude Monet, Pierre-Auguste Renoir and Henri Matisse were discovered.

The reclusive Cornelius Gurlitt, who said he had inherited much of the art from his father, kept more than 1,200 works in his Munich apartment and 250 more in Salzburg, Austria. The discovery brought renewed attention to the many unresolved cases of looted art that was never returned to original Jewish owners or their descendants. Cornelius Gurlitt died in 2014 at age 81, designating Switzerland’s Kunstmuseum Bern as the sole heir to a collection worth billions of dollars.

Friedmann’s daughter Charlotte died in Auschwitz, leaving Toren as the only descendant to stake a claim. After reclaiming “Two Riders on the Beach,” Toren tracked down another piece that had oddly made its way to Israel. After a lengthy negotiation he got back “Basket Weavers” as well, an Impressionist work depicting five boys weaving baskets out of straw.

Despite his background, Toren had no problem using his language skills to cultivate German clients in New York, even those with Nazi connections. As a patent attorney, he once represented a Bavarian farm machinery company with ties to the infamous Nazi doctor Josef Mengele.

“I asked my father how he could deal with Nazi clients and he told me that if he didn’t do the work someone else would,” Peter Toren said, before adding. “And he charged such clients an unofficial 25% Nazi surcharge.”

Toren’s grandson, Ben, said his grandfather pursued the art collection in retirement with the same “unsentimental” focus and tenacity as he did in his law career.

“The artwork thing gave him a new lease on life,” he said. “He very strongly felt that these paintings were his paintings and it gave him a lot of purpose.”

“But he never presented himself as being any kind of victim and he never asked for any pity,” he quickly added. “He was always fairly stoic in his demeanor, in how he carried himself. His life experience required of him to have a rock-solid exterior. That’s how he presented himself to the world.”