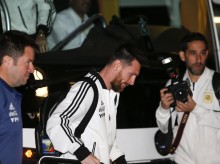 Argentinian superstar Lionel Messi arrives at the team's hotel in Tel Aviv, Israel a day ahead of a friendly soccer match against Uruguay. (AP Photo/Ariel Schalit)

TEL AVIV, Israel (AP) — Soccer superstar Lionel Messi finally arrived in sports-crazed Israel on Sunday, after a Palestinian protest campaign derailed his previous visit and the latest round of cross-border fighting in Gaza threatened to scare him off once again.

Messi and his Argentine teammates are in the Holy Land to play an international friendly against his Barcelona teammate Luis Suarez and the Uruguay national team. It’s a game that has been just as eagerly anticipated for its political ramifications as it has for its sporting star power.

Suarez and his teammates arrived on Saturday after a friendly match in Hungary while Messi touched down Sunday after a direct flight from Saudi Arabia, where Argentina beat Brazil 1-0 in another friendly.

A year ago, Argentina abruptly canceled a World Cup warmup match in Jerusalem, saying it was concerned for the safety of its players. The decision followed protests in the West Bank and other countries amid outrage that Messi would play in Israel. Those demonstrations included threats to burn Messi jerseys and brandished images of the Argentina national team’s jersey stained with red paint resembling blood. As a result, the FIFA soccer governing body banned Palestinian soccer federation president Jibril Rajoub for a year for “inciting hatred and violence” against Messi.

Monday’s match was nearly nixed as well after last week’s two-day eruption of violence following Israel’s targeted killing of a Palestinian militant commander in Gaza. The Islamic Jihad militant group responded by firing hundreds of rockets into Israel, setting off warning sirens as far north as Tel Aviv — the site of Monday’s match. The fighting killed 34 Palestinians, including 15 civilians.

Both Argentina and Uruguay were reportedly on the verge of calling off their participation.

But they eventually decided to play following intense, high-profile negotiations with Sylvan Adams, a Canadian-Israeli billionaire who’s responsible for staging the match in Israel.

The Palestinian BDS group PACBI condemned Monday’s match, accusing Argentina and Uruguay of crossing the “Palestinian nonviolent picket line, allowing Israel to use the beautiful game to sports-wash its crimes against Palestinians.”

Adams, who describes himself as a “self-appointed ambassador-at-large” for Israel, told The Associated Press that he’s looking to counter the country’s image, and has sponsored previous sporting and cultural events in the country. Last year, he brought the opening stages of the Giro d’Italia cycling race to Israel, and this year he paid more than $1 million for Madonna to perform at the Eurovision song contest in Tel Aviv, overcoming pro-Palestinian calls to boycott the events.

The grassroots BDS movement, advocating for boycotts, divestment and sanctions against Israel, notched one of its greatest achievements to date by helping pressure Messi and Argentina out of last year’s match.

A spooked Argentine squad bolted at the last moment, even after direct a plea from Prime Minister Benjamin Netanyahu to Argentina’s President Mauricio Macri asking them to reconsider.

Israel’s sports minister Miri Regev was widely criticized for politicizing the event by insisting it be played in contested Jerusalem and by trying to orchestrate a photo-op with Messi.

Argentina is among the most popular brands in Israel and Messi, a six-time FIFA player of the year, is an icon here as well. But the disappointment over the cancellation led many Israelis to root against him in the World Cup and rejoice in Argentina’s early exit.

This week’s match was promoted with far less fanfare, and yet Middle East politics played a role once again with the deadliest round of violence in Gaza in years.

Match organizers were in constant touch with the teams throughout the fighting. Even after an informal cease-fire was reached on Thursday, the game remained in question. But with Uruguay’s head coach already in Tel Aviv, and Israeli soccer players and officials lobbying their South American colleagues, it was salvaged.

For Messi, this will be his second match after returning from a three-month ban imposed by South American soccer body CONMEBOL after he made accusations of corruption following the Copa America tournament in Brazil in July.