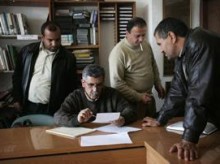 ABU DIS, West Bank – With the Muslim call to prayer wailing from a mosque, some 20 Palestinian students crowd into a classroom on the outskirts of Jerusalem to study the origins of the Jewish state.

The Israel studies program at Al Quds University in the West Bank claims to be the first in the Arab world, drawing an eclectic mix of grizzled ex-prisoners, veiled women and top political operatives. Some seek knowledge to better fight their enemy, while others believe learning more about Israel increases the chances of peace.

Either way, the program has become a hit, with students lining up to study courses about the Israeli economy, its army and the role of women in its society.

“Different students go into it with different motivations, of course, but I think that most of the students who are engaged in the Israel studies program are people who are committed to co-existence with Israel,” said the college president, Sari Nusseibeh.

The two-year master’s course is the brainchild of Nusseibeh, a Palestinian moderate who has long preached dialogue with Israel.

The program, which has 120 students, counts among its alumni some prominent Palestinian personalities, including former Gaza strongman Mohammed Dahlan and his counterpart in the West Bank, Jibril Rajoub.

“Israel was a mystery to me,” he said. “This is a process of discovery.”

He said Palestinians could learn a lot from their next-door neighbour about building a state. “There are similarities between the Israeli cause and the Palestinian cause,” he said. “It’s not a ‘learn the enemy’ thing.”

Such views are not often heard among the four million Palestinians living in the West Bank and Gaza, whose daily contact with Israelis is often limited to tense encounters with weapon-wielding soldiers.

Few of the students have ever travelled into Israel. From their classroom window they can see the concrete slabs of the wall and fence Israel is building to keep out suicide bombers. But the isolation doesn’t stop them from wondering what it’s like.

Rasha Rabaieh, a veiled 23-year-old from Bethlehem enrolled in the Israel studies program, said she wanted to “know the enemy, to understand why they came here.”

Her studies have dispelled some of her animosity. “I had an image of Israel as an enemy, but now I feel less hatred,” she said.

During a recent class on “the social structure of Israel,” students heatedly debated the revival of the Hebrew language, the role of Israel’s immigrant community versus its native-born “Sabras,” and whether modern Zionism is religious-or nationalist-driven.

When students started bringing up Islam to explain their positions, Prof. Mohammed Massalha cut them short, saying he wanted academic points of view, not ideological ones.

The program’s curriculum is hardly representative of mainstream Israel studies programs seen elsewhere in the world. It relies heavily on writings from the fringes of Israeli academia.

Massalha’s class, for instance, analyzed at length a text written by Azmi Bishara, an Israeli Arab and former lawmaker who fled the country this year amid suspicions of treason and espionage.

Inside graffiti-adorned classrooms, in this Arab town once earmarked as the capital of Palestine, the students furiously talk about Israeli politics. One class focuses on the ultra-Orthodox Shas party, with Khader noting that like the Islamic militant Hamas group, Shas draws strength from the poor and marginalized. “They establish nursery schools and work in poor neighbourhoods that are neglected by the government.”

A lot of students have a hard time separating academics from their daily frustrations.

Abir Waridat, 23, from Hebron, was pushed by her family to enrol so she could become its resident “Israel expert.” Seven of her brothers are in Israeli prisons, her house was once demolished and she blames Israel for the death of her father – who had a stroke after an encounter with a soldier. She said she wants to be able to teach, and warn, the next generation of Palestinians about Israel.

Another student, Mohammed Ilias, said that was exactly why it was important for him to study.

“I believe the conflict will last a long time and you need to know who you are working against,” he said. “It is important to know their history, their thought process.”

Ilias, a middle-aged man who spent 15 years in an Israeli prison, said he wanted to learn how Palestinians can replicate Israel’s successes.

“We need to understand why we lost,” he said. “That is a question that constantly passes in my mind. Why did we lose and how can we overcome them in the future?”

Shlomit Keren, director of the Israel studies program at the University of Calgary, said the program’s concept was positive, regardless of the students’ motives.

“The moment you base your world view on knowledge, that is a welcome development,” said Keren.

Israeli academics often visit the Abu Dis campus. But while studying Hebrew is part of the school curriculum, visiting Israelis are advised against speaking their native tongue, for fear of angering militant students.

Khader, the civil servant, insisted most of his colleagues’ intentions were pure.

“There is no enemy in the education process,” he said. “Ignorance is the main enemy.”