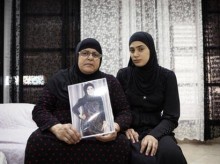 Majeda Abu Sharkh, left, holds a picture of her daughter Duaa who was killed as she poses for a photograph with her niece Alaa Khalili in Lod. (AP Photo/Dan Balilty)

LOD, Israel (AP) — After years of abuse and death threats, Duaa Abu-Sharkh had finally divorced her husband, agreeing even to give up custody of her four young children and family property to escape his violent grip. Then, one night in late September, as the 32-year-old mother was dropping off her kids after a rare visit, a masked gunman dragged her from her car and shot her in the head before their eyes.

Her killing is the latest in a string of murders of Israeli-Arab women believed to have been carried out by relatives. But after years of silence, the recent outburst has sparked soul searching in the community and unprecedented demonstrations against its mistreatment of women.

The killings have some similarities to the so-called “honor killings” elsewhere in the Muslim world, where women can be murdered by relatives for tarnishing the family name through perceived sexual indiscretions. But activists in Israel reject such comparisons, saying the vast majority of the killings are the result of rampant spousal abuse that has been ignored by police in a landscape rife with drugs, crime and poverty.

Traumatized by the recent death of Abu-Sharkh and other women in their communities, Arab citizens, who have long been suspicious of Israeli authorities, are now calling for more police and social services in their long-neglected neighborhoods.

Though just a fifth of the population, Arabs represent half of the women killed in Israel each year.

And half of those women are killed in Arab neighborhoods of Ramle and Lod, cities just outside of Tel Aviv where several large clans involved in organized crime have made weapons easily accessible and allowed violence, particularly toward women, to go unchecked for years.

“Women in Arab society have a lower status. So, when there is violence, who pays the price? Women,” said Samah Salaime, a social worker who founded the Arab Women in the Center organization to aid victims in the Lod area. She said Israeli authorities treat the oppression of women as a value in Arab society. “They deal with us as if the blood of the Arab woman is cheaper,” she said.

But things are starting to change.

Abu-Sharkh’s killing, and that of another divorced mother of four in Jaffa a month later, spurred a series of street protests that drew hundreds of women and men, both Arabs and Jews. A parliamentary committee heard testimony from Arab women and the national police chief said the level of violence was “unacceptable,” and vowed to battle it.

Arabs hold full citizenship rights in Israel, but are generally poorer and less educated than Jews and suffer from discrimination and substandard public services. Some Israelis, including top politicians, have questioned their loyalty to the state, contributing to their sense of being treated as second-class citizens. Arabs often accuse the police of being indifferent to Arab crime, so long as Jews are not harmed.

Earlier this year, after a deadly shooting in downtown Tel Aviv and a subsequent weeklong manhunt for the Arab shooter, Israel launched a campaign to collect illegal arms in Arab towns. Later, it promoted an Arab police officer to deputy commissioner, making him the highest-ranking Muslim ever to serve in the force, and putting him in charge of the new law and order drive in Arab communities.

Police spokesman Micky Rosenfeld said families used to tamper with crime scenes and make it difficult for police to collect evidence and testimony in Arab areas. But he said attitudes have changed in recent years and cooperation is much better. The police force is currently recruiting an additional 1,500 Arab officers and holding outreach programs to strengthen its ties to the community, he said.

“The days of the instant anti-police, anti-government and anti-establishment sentiment are over,” he said. “The main emphasis now is to be there and to connect with the Arab community.”

Arab lawmaker Aida Touma-Sliman, who heads the parliamentary committee on the status of women and gender equality, said that wasn’t enough. She noted that 15 women have been killed in the Ramle-Lod area in the past year, but only three men have been charged.

Touma-Sliman said police have been persuaded to stop automatically referring to the deaths of Arab women as “honor killings,” saying it was an offensive term “developed by the patriarchal society in order to legitimize the murder itself.”

In Abu-Sharkh’s case, the writing was on the wall. Her ex-husband, who had links to local criminal gangs, would beat her regularly, once breaking her arm and nose, and strangle her until she turned blue, said her mother, Majeda Abu-Sharkh. When they complained to police, the ex-husband threatened to kill Abu-Sharkh and gunmen opened fire at her family’s home.

Police briefly detained him after her killing but released him for lack of evidence.

“If it was a Jewish woman, the police would have found her killer in two hours,” Majeda said, clutching pictures of her dead daughter. “Thank God, it is all over with now. She has gone to God and it is better for her there. She is resting.”

Salaime, the social worker, said such tragedies would hopefully diminish as taboos are broken and the status of women slowly improves.

“Men know that the Arab woman is now studying more, has more freedom and we have left a lot of men behind who still think that an Arab woman is worthless, that her body is a property that you can harm without being held accountable,” she said. “The path is very long. It is a very painful journey.”