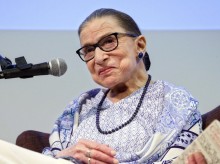 JERUSALEM (AP) — U.S. Supreme Court Justice Ruth Bader Ginsburg expressed hope the traditional “bipartisan spirit” of congressional hearings for judges will once again prevail in Washington, rather than the votes of recent years that have mostly divided along party lines.

Speaking at a Jerusalem cinema on Thursday after the screening of “RBG,” the breakout hit documentary about her life and career, Ginsburg said she would not address past or present personnel changes on the court, in apparent reference to Justice Anthony Kennedy’s upcoming retirement.

But the liberal icon did bemoan how partisan the process of picking a justice has become.

“I was considered by some a controversial person because of my affiliation with the American Civil Liberties Union,” she said about her 1993 confirmation hearings. “There wasn’t a single question asked of me during the hearings about my ACLU connections. The vote was 96-3.

“When Justice Breyer was nominated the next year the vote for him was also in the 90s. Since then the Senate has tended to divide along party lines and I think that’s unfortunate,” she continued. “During my confirmation hearings, perhaps my biggest supporter was Orrin Hatch, the Republican senator from Utah. I hope someday we will get back to the bipartisan spirit prevailing with respect to the confirmation of judges.”

Ginsburg is in Israel to receive a lifetime achievement award from the Genesis Prize Foundation, a prominent Jewish organization. The 85-year-old Ginsburg was just the second female Supreme Court justice and often cites her Jewish heritage as a source for her love of learning and sensitivity to the plight of minorities.

“RBG” has added to her unlikely status as pop culture icon, first created by the 2015 book, “Notorious RBG: The Life and Times of Ruth Bader Ginsburg.”

The documentary traces her legal work advancing rights for women leading up to her 1993 elevation to the top court, and her role as a justice since — and also touches on the cultural phenomenon that has ensued, including bobblehead dolls, tattoos, T-shirts and coffee mugs bearing her likeness that have become hipster staples. A Hollywood biopic is also slated for release later this year.

As the court’s senior liberal justice, Ginsburg spoke warily about a Trump presidency before the 2016 election. “I don’t want to think about that possibility, but if it should be, then everything is up for grabs,” she said.

In Jerusalem, she steered clear of any such references, focusing instead on how the court could bring even ideological opposites together. She spoke about her unlikely friendship with the late Justice Antonin Scalia, a conservative stalwart.

Ginsburg appeared in her trademark glasses and ponytail, a blue-and-white shawl draped over her shoulders. With three retired Israeli Supreme Court judges in the audience she spoke about how much progress women have made in her lifetime and how her own Judaism has inspired her sense of justice.

The Genesis Prize Foundation sponsors the annual Genesis Prize, an award informally known as the Jewish Nobel that includes prize money, for which Ginsburg was initially a candidate. Pulling her “pocket constitution” from her bag, she said she could not accept it because it would amount to receiving something from a foreign state. Instead, the former winners of the prize, including former New York City Mayor Michael Bloomberg, actor Michael Douglas, violinist Itzhak Perlman and sculptor Anish Kapoor nominated her for the foundation’s first lifetime achievement award.

Ginsburg said she was driven by the Jewish values of pursuing justice and “Tikkun Olam,” repairing the world.

“I am a judge, born, raised and proud of being a Jew. The demand for justice, for peace, for enlightenment runs through the entirety of Jewish history and Jewish tradition,” she said at her award ceremony. “I hope that in all the years I continue to have the good fortune to serving on the bench of the Supreme Court of the United States I will have the strength and courage to remain steadfast in service of that demand.”