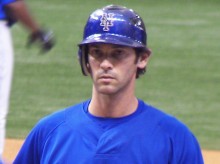 JERUSALEM — Three Jewish former major leaguers have joined Israel’s bid for the 2013 World Baseball Classic, a move that could transform the baseball backwater into a legitimate contender.

Shawn Green, Brad Ausmus and Gabe Kapler met this week in Los Angeles with Israeli baseball officials and committed to helping Israel field a competitive team in next year’s WBC qualifying round, the three players told The Associated Press.

While it remains unclear if the recently retired players will take the field themselves, their involvement provides an immediate boost to Israeli baseball, which remains a niche sport in a country where soccer and basketball reign supreme.

The 39-year-old Green, a two-time MLB All-Star, did not rule out playing, saying he would help the team “in any capacity.”

“If I felt like that was a role that the team needed, I would prepare for it … I’m pretty confident that it wouldn’t be too huge a mountain to climb to get back and play,” he said. “I feel a strong connection to Israel and it would be an honor to put on the uniform.”

In Israel, a small, devoted group of American ex-pats make up the majority of the local leagues and the country has had moderate success in international youth competitions. A professional league was launched in 2007 but was dominated by foreign players and lasted just one season.

But thanks to WBC tournament rules that allow countries to field players who are eligible for citizenship — even if they are not actual citizens — Israel can tap into the formidable pool of Jewish-American baseball talent that includes 13 major leaguers.

Ausmus said that, if Israel gets through next year’s qualifying round, it “could be a contender” in 2013. He said he would try to reach out to Jewish major leaguers.

“My gut says they would consider playing,” he said.

“Today, the idea of bridging the gap between the generations of American/Jewish baseball fans and baseball fans in Israel is an enticing prospect,” Ausmus said in an email. “Hopefully, this is the beginning of renewed and long interest in baseball in Israel.”

“I think there will be a big interest. There are going to be a good number of guys who want to participate,” said Kapler. “I think it makes sense to dream about it and imagine what could be if the stars align.”

Israel is among 16 countries invited to play in next year’s qualifying round, with the top four teams advancing to the WBC. The 2013 tournament will be the third World Baseball Classic. Japan won the first two competitions, in 2006 and 2009.

Peter Kurz, the secretary-general of the Israel Association of Baseball, said Israel would likely have to make it past the qualifiers before any professionals would consider suiting up for the team. He said the qualifying team would recruit recently retired Jewish major leaguers as well as players in the minor leagues and top U.S. colleges.

The star power of Green, Ausmus and Kapler makes the team “much more attractive,” Kurz said. He said one of the three is expected to become the team manager, and all are going to contribute in coaching, recruiting and fund raising.

“Our main goal is developing baseball in Israel by putting together a team that can compete,” Kurz said.

Israeli baseball officials are hoping the trio will help draw quality players to upcoming team tryouts, as well as donations for a $3 million baseball complex being built in Raanana, in central Israel, which will become the country’s central baseball hub.

According to the association, some 2,000 youths and adults play baseball in Israel and it says the sport has enjoyed growth in recent years since the experiment with the professional league. But adding the former major league standouts takes the sport to a whole new level in the Holy Land.

Green was perhaps the greatest Jewish baseball player since Sandy Koufax, hitting 328 homers in a 15-year career with the Toronto Blue Jays, Los Angeles Dodgers, New York Mets and Arizona Diamondbacks. Ausmus played 18 years in the big leagues, including in the 1999 All-Star Game, and was a three-time Gold Glove winner at catcher for the Houston Astros. Kapler had a productive 13-year career and won a World Series title with the Boston Red Sox in 2004.

Kapler, known during his playing days as “The Hebrew Hammer,” is very open about his pride in being a Jewish role model. He has a Star of David tattoo on his left calf — with the inscription “Strong Willed, Strong Minded” in Hebrew — and the post-Holocaust motto “Never Again” with a flame and the dates of the Holocaust tattooed on his right calf.

He said he is eagerly anticipating his first visit to Israel.

“It is a great thing when you can introduce a new sport to a place that doesn’t have it in its blood yet,” he said.