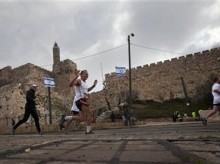 But like many things in Jerusalem, even Friday’s marathon has become fraught with politics, a magnet for opposing claims by Israelis and Palestinians.

The Palestinians have called for a boycott of the race because the route goes through east Jerusalem, their hoped-for capital. On the other side of the political divide, a hard-line Israeli lawmaker plans to run the course to assert Israeli sovereignty over the entire city.

The competing claims, even over a seemingly innocuous sporting event, reflect the deep emotions over Jerusalem.

Israel captured east Jerusalem from Jordan in the 1967 Mideast war and considers the whole city its capital, though the claim is not recognized internationally. The Palestinians say there cannot be peace without shared sovereignty in east Jerusalem.

The fate of the area, and particularly the ancient Old City, which is home to sensitive Jewish, Christian and Muslim holy sites, has long been the most explosive issue in peace efforts.

Since taking office 4 1/2 years ago, Barkat has looked to unite the city’s Arab and Jewish residents by linking them with a light rail system and hosting sporting and cultural events.

“The Jerusalem International Marathon is a symbol of coexistence and of the unique power of sport to bridge social, ethnic, and political divides,” his spokesman Barak Cohen said. “The marathon will cross through many neighborhoods of Jerusalem, on all sides of the city, and is open to all residents regardless of religion, race, politics or any other personal trait or belief.”

Some 20,000 participants are expected to run in the third annual Jerusalem marathon, which will include a full marathon, which is 42 kilometers (26.2 miles), a half marathon and two shorter races. The event has attracted dozens of Arab residents and more than 1,750 runners from 54 countries.

The city has been spiffed up for the occasion. The finish line at Jerusalem’s main park has been adorned with flags and banners from the many sponsors. For the Palestinians, though, the event marks a provocation.

“This marathon is part and parcel of other Israeli policies and practices in Jerusalem that are aimed at exerting Israeli control over the occupied city and isolate it from the rest of Palestine,” the Palestine Liberation Organization said in a statement. “Sponsoring or participating in the marathon implies recognition and active participation by the individual or company in Israel’s illegal annexation and racist policies in Jerusalem.”

On Thursday, two senior clerics, one Muslim and one Christian, voiced their opposition to the race. And Omar Shalabi, an official with Palestinian President Mahmoud Abbas’ Fatah movement, said a group of activists would hoist Palestinian flags as runners pass through the Old City. He said there were no plans to block the runners.

Among the sponsors are U.S. footwear company New Balance and the Crowne Plaza hotel chain, which is owned by U.K.-based InterContinental Hotels Group PLC. New Balance did not immediately return a message seeking comment. A spokeswoman for InterContinental said the company was not aware of any boycott efforts. Adidas, which has sponsored the marathon before despite political pressure to drop its affiliation, is not sponsoring the event this year. A spokesman did not return a message asking why the company is no longer a sponsor.

Danny Danon, a hawkish lawmaker with the ruling Likud Party, said he was running to provide a counter statement to the Palestinians.

“I think it marks a clear message: When we talk about the city being united, we mean it,” he told The Associated Press.

As Barkat himself can attest, any development in the city, no matter how well meaning, can be politically explosive. The new light rail was opposed by Palestinians as an encroachment because it included the eastern part of the city in its path, though Arab residents now heavily use the train service.

His plan to develop an Arab neighborhood outside the walls of the Old City also ran into fierce opposition from residents, while archaeological excavations and even road construction have frequently sparked religious or ethnic strife.

Since capturing east Jerusalem in 1967, Israel has ringed the sector with a series of settlements that are now home to roughly 200,000 Jews, in addition to about 300,000 Palestinians in the area.

The international community bitterly opposes these developments, saying they are illegal settlements on occupied land. Some 300,000 Jews live in the western part of Jerusalem. Under Israeli control, though, the city is open, and the lines between east and west have become blurred.

The marathon route will take the runners through the Old City, past the president’s residence and past Arab neighborhoods in east Jerusalem to the campus of the Hebrew University on Mount Scopus.

One of the foreign participants is Raef Guirges, a 56-year-old Egyptian-American who plans to run draped in a tricolor flag bearing the message “God is love” in English, Hebrew and Arabic.

“I don’t like politics. I am a very simple person with a very simple message: Let’s try to love each other the same way God loves us,” said Guirges, a Christian who has run more than 100 marathons worldwide.