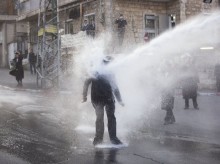 An ultra-Orthodox Jew gets hit by a police water canon during a protest against Israeli army conscription in Jerusalem. (AP Photo/Oded Balilty)

JERUSALEM (AP) — A string of protests by ultra-Orthodox Jewish activists against Israel’s compulsory military service has paralyzed Jerusalem in recent weeks in what their leaders had hoped would be a show of strength by the traditionally insular society.

Instead, the demonstrations reflect a desperate attempt by members of a vocal minority trying to preserve a lifestyle that is rapidly changing around them.

Widely seen as a drag on the country’s economy, Israel’s ultra-Orthodox world is being forced to adapt — with growing numbers embracing technology, pursuing higher education, entering the work force and even serving in the army.

Experts say tomorrow’s ultra-Orthodox will look much different from the community that mainstream Israel fears today.

“If you are expecting everything to change tomorrow morning — that is not going to happen. But if this is done quietly and it is not forced upon us, it will happen on its own,” said Gidon Katz, an ultra-Orthodox Jew who runs and advertising and public relations agency in Jerusalem.

For decades, the ultra-Orthodox have leveraged their significant political power into maintaining a segregated lifestyle. They run a separate network of schools, enjoy sweeping military draft exemptions and raise large families on taxpayer-funded handouts.

The system has fed a visceral culture war between the largely cloistered ultra-Orthodox and the secular majority resentful of what it considers preferential treatment.

As their numbers have grown, many in the impoverished community realize their way of life is unsustainable. In a previously unseen phenomenon, the recent protests have exposed open resistance from within the community.

“Judaism never said there was anything wrong with working,” said Katz, noting that it is no longer uncommon to see ultra-Orthodox lawyers, accountants and high-tech executives. “The study of scripture is the highest calling. That’s the ideal but it’s not for everyone.”

The ultra-Orthodox, known in Hebrew as “Haredim,” or “those who fear God,” are the fastest growing sector in Israel. Due to their high birth rate, they now number more than 1 million people, or about 12 percent of Israel’s 8.7 million citizens. The majority live beneath the poverty line, according to the Israel Democracy Institute, an independent think tank.

Their numbers are expected to rise to 14 percent in 2024, 19 percent in 2039 and 27 percent in 2059, the think tank predicted — figures that have sparked fear of Israel’s developed economy being saddled with a workforce that’s not prepared for the modern world.

Gilad Malach, an institute researcher who specializes in the community, said such fears are exaggerated. He believes the modernizing effect will make the Haredi community far more educated and employable, much the way ultra-Orthodox communities in the United States and Europe have adapted.

“The apocalyptic vision will not come to fruition because they will be different,” he said. “For those trying to cling to the old ways, the war is lost.”

Malach estimates about 10 percent of the ultra-Orthodox belong to a modern camp that has embraced technology and modern society, while an equal-sized hard-line group shuns any engagement with the establishment. He believes the remaining 80 percent are open to change, to varying degrees.

The percentage of Haredim entering Israeli universities has more than doubled since 2009, Malach said, though they still only make up 4 percent of the student body.

But Dan Ben-David, a Tel Aviv University economist and president of the Shoresh Institution for Socioeconomic Research, said these figures are misleading.

Most Haredi university students drop out, in large part because of their poor elementary and secondary schooling, he said, adding that working-age Haredim who complete an academic degree has been relatively stable for the past decade.

In contrast, American ultra-Orthodox Jews, who are required to complete a core school curriculum, have more than twice as high a rate of academic degrees.

“There are no shortcuts in life,” said Ben-David. “Wanting to participate in a modern economy without the necessary tools is a recipe for disaster.”

To keep up in a knowledge-based marketplace, Ben-David said Haredi children must receive a basic education that would give them the skills to “pull their weight” in the future.

For decades, secular-led Israeli governments have maintained the status quo, either because of their dependence on ultra-Orthodox political kingmakers or fearing an angry backlash.

The most contentious issue has been induction in the military. Draft exemptions go back to Israel’s establishment in 1948, when the government allowed several hundred gifted students to pursue religious studies to help rebuild great schools of Jewish learning destroyed in the Holocaust. Over the years, the numbers have ballooned, creating widespread resentment.

Prime Minister Benjamin Netanyahu’s government recently rolled back previous legislation that had aimed to increase conscription — only to be struck down by the Supreme Court. The court has demanded new legislation within a year.

In the meantime, most Haredi men have the option of receiving repeated deferrals, as long as they register with the military — a loophole embraced by the Haredi leadership.

But Shmuel Auerbach, a prominent Jerusalem rabbi with some 25,000 followers, rejects even this model. When some of his followers were jailed for refusing to register, thousands took to the streets of Jerusalem, halting the city’s light rail system and snarling traffic at major intersections.

But in a dramatic shift, some Haredi counter-protesters showed up and cursed the demonstrators.

The Israeli military says the number of Haredi soldiers has surged thanks to its efforts to cater to their needs, such as providing strictly kosher food, limiting contact with female soldiers and a schedule synchronized with prayer times.

The military said 2,850 Haredi soldiers enlisted last year, a 30 percent increase from 2014. In all, there are currently 7,000 Haredim in uniform.

The Hebrew University’s Amiram Gonen, director of the center for the study of ultra-Orthodox society at the Jerusalem Institute for Policy Research, said Auerbach’s followers are shrinking in a world that realizes it needs to adapt.

“There is no earthquake, but there is a dynamic of new norms creeping into the society,” he said.