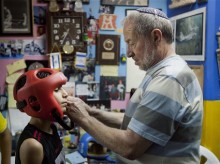 JERUSALEM (AP) _ When Gershon Luxemburg started his boxing club 30 years ago, he was looking to build champions, not bridges.

But thanks to a loyal cadre of Jewish and Arab fighters who flock to his stuffy gym inside a converted underground bomb shelter, Luxemburg’s club has become a rare melting pot that brings the warring sides closer together _ one punch at a time.

Luxemburg and his brother Eli run Jerusalem’s only official boxing club. The cramped, smelly gym has pictures of Muhammad Ali and other boxing greats gracing the walls and an assortment of heavy bags hanging from the ceiling. Located in a neighborhood in Jewish west Jerusalem, it draws boxers from all parts of the city and has become a second home for both aspiring professionals and amateurs looking to learn the sweet science.

Despite the sport’s violent nature, Luxemburg says Jews and Arabs never clash in his gym.

“It’s very easy for me to see hate in someone’s eyes, and I’ve never seen it here,” he said. “The boxers are close. They are like brothers to each other.”

At a time when Israelis and Palestinians are increasingly segregated, the Maccabi Jerusalem Boxing Club offers a hub of coexistence. Jews and Arabs who would normally never cross paths jog, skip rope and spar. They pant and sweat, and the occasional nose gets bloody, but tensions never rise after the bell is rung.

Luxemburg says it is typical for aspiring boxers to come with troubled pasts. But learning how to fight actually lessens violent tendencies, he said.

“When someone has that confidence in himself, he doesn’t look for a fight. He doesn’t need to throw stones,” he said. “Sports brings people together. When you get in that ring together, when you get so close you can smell the other person … it’s a different level.”

He said that in sanctioned tournaments he lets his fighters get “cruel” and hit hard. But the in-house training is kept civil, even cordial.

Ismail Jafrei, a 37-year-old Palestinian truck driver from east Jerusalem, the section of the city claimed by the Palestinians for their future capital, says the trick is to leave politics at the door.

“When we walk down those steps we leave politics, religion and all that mess outside,” he said. “Inside the club, we are all brothers. We spar and at the end we shake hands and everyone goes their own way.”

“We’re just fighters and it doesn’t matter if one is an Arab and one is a Jew,” said Yehuda Luxemburg, a 23-year-old Israeli combat soldier and nephew of the club’s trainers. “There is something pure about boxing. It brings people together.”

Eli Luxemburg is an equal opportunity screamer. At a recent practice, he hollered at his charges “fire, fire, fire” and they began to unload jabs at each other’s boxing helmets.

“Mohammed. Move your feet! You aren’t moving your feet!” he yelled at a Palestinian boxer. The shy east Jerusalemite nodded, and Yehuda Luxemburg gave him some pointers on footwork and other fine points.

The Luxemburg brothers were both former champs in their native Uzbekistan before immigrating to Israel. They now enjoy a cult-like status among Jerusalem’s small but tightly knit boxing community.

They instruct in a mixture of Hebrew, Russian and English. While many Palestinians in Jerusalem know Hebrew, instructions are translated into Arabic for those who don’t understand.

Israeli boxers have enjoyed a moderate level of success internationally. Most originate from the former Soviet Union, such as former WBA super welterweight champion Yuri Foreman and heavyweight Roman Greenberg _ nicknamed the “Lion from Zion.”

Some of the Gershon Luxemburg’s fighters have gone on to compete in the Olympics and in European championships, but he says his ultimate dream is to host a tournament in Jerusalem with all religions attending _ and perhaps Muhammad Ali too.