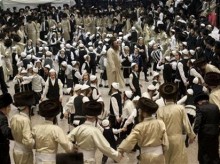 JERUSALEM (AP) — As Israel’s new government takes shape, the country’s powerful ultra-Orthodox Jewish political parties seem poised to find themselves in unfamiliar territory — the parliamentary opposition — instead of their traditional seats around the Cabinet table.

Nothing is certain yet. Netanyahu is still negotiating, and he has not yet signed coalition agreements with the two main parties — the centrist Yesh Atid and hawkish Jewish Home.

If his new government excludes the ultra-Orthodox parties, it could reshape the face of Israel, which has experienced growing strife in recent years between the fast-growing ultra-Orthodox community and the general public.

Ultra-Orthodox party leaders are vowing to put up a fight.

“This is a passing trend,” Meshulam Nahari, an outgoing Cabinet minister from the ultra-Orthodox Shas party, told The Associated Press. “People understand the value of studying the Torah and we will not be abandoned. Those who will cut funding have no right to be a part of the Jewish state.”

The ultra-Orthodox make up about 10 percent of Israel’s 8 million citizens. Because of Israel’s coalition government system, they have traditionally wielded influence well beyond their numbers by ensuring a parliamentary majority for a string of prime ministers.

In recent decades, ultra-Orthodox parties have used this kingmaker status to secure vast budgets for their religious schools and seminaries that teach students about Judaism but very little math, English or science. Tens of thousands of young ultra-Orthodox males are granted exemptions from military service in order to pursue their religious studies, and older men collect welfare stipends while continuing to study full time.

The system has led to high rates of unemployment and poverty in the ultra-Orthodox community. It also has bred widespread resentment among the secular and modern Orthodox publics, and it became the central issue in January parliamentary elections.

Yesh Atid and the modern Orthodox Jewish Home surged in popularity by promising to change the system and “ease the burden” on middle class Israelis who serve in the military, work and pay taxes. Yesh Atid won 19 seats, making it the second-largest faction in the 120-seat parliament, while Jewish Home holds 12 seats.

Yesh Atid’s leader, Yair Lapid, and Naftali Bennett of the Jewish Home have forced Prime Minister Benjamin Netanyahu to promise the ultra-Orthodox will not be in the new coalition.

Both leaders insist on reforming the country’s military draft regulations and on pushing members of the cloistered ultra-Orthodox society into the workforce and away from a life of state handouts.

Lapid, whose parliamentary faction includes two modern Orthodox rabbis, has said he does not oppose religion or the religious. Instead, he says all healthy adults should work, and that it is not the government’s responsibility to subsidize full-time religious study. Modern Orthodox Jews follow the commandments of the religion while taking part in Israel’s general society, working and serving in the military.

Demographics indicate that ultra-Orthodox will maintain their power in the long run.

More than a quarter of all Israeli first-graders are ultra-Orthodox. Government statistics have projected that if these trends continue, the ultra-Orthodox could make up 15 percent of the country’s population by 2025.

Ultra-Orthodox leaders say their communities are being unfairly persecuted. They say their young men serve the nation through prayer and study, thus preserving Jewish learning and heritage. Many rabbis fear immersion in mainstream society will expose them to secularism and cut away at a distinct lifestyle that has kept the Jewish people alive through centuries of persecution.

Yesh Atid “doesn’t want me in the coalition because I have a beard, sidecurls and a skullcap. It sounds bad, but that is the truth,” Moshe Gafni, an influential ultra-Orthodox lawmaker who headed parliament’s powerful Finance Committee, told the parliamentary TV station this week.

Either way, ultra-Orthodox leaders are having a hard time adjusting to their newfound status as outsiders.

“History will judge sternly the person who lent his hand to this situation, and your excuses will not survive its strict scrutiny,” Deri wrote on his Facebook page.

Yair Sheleg, an expert on religious Jews at the nonpartisan Israel Democracy Institute, says change is inevitable in ultra-Orthodox society, not because the new government will force it, but because the society itself is changing. He said many members, especially among the young, pushing toward more integration.

The tide has already begun to turn. In 2011, for instance, 55 percent of ultra-Orthodox women and 45 percent of the men held jobs, up from 48 percent and 33 percent respectively nine years earlier, according to Israel’s central bank and its central bureau of statistics. The numbers, while still far below the national average of around 80 percent, show the community is far from the homogenous mass viewed by outsiders.

The prospect of a more secular government is raising hopes among mainstream Israelis.

“There are rare moments in which it is all right to gloat,” Maariv newspaper columnist Ben-Dror Yemini wrote Tuesday. “After the abuse that has continued for too many years and which threatened to destroy us, the whining by the ultra-Orthodox leaders provide us with precisely such an opportunity.”