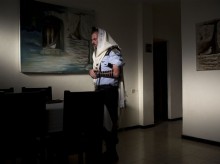 BNEI BRAK, Israel (AP) _ Moshe Prigan starts his day off just like many other men in the ultra-Orthodox city of Bnei Brak with his morning prayer. It’s only later that the routine takes an unexpected twist, when he puts on his air force uniform and heads to the Israeli military headquarters in Tel Aviv.

The 30-year-old captain doesn’t just serve in the military. He also recruits other ultra-Orthodox Jewish men to enlist, something the cloistered community traditionally has avoided doing.

But with Israel recently passing a contentious law to gradually increase ultra-Orthodox enlistment, soldiers like Prigan could symbolize a historic shift among those known in Hebrew as “haredim,” or those who fear God.

For Israel’s 66 years of existence, the ultra-Orthodox mostly have kept their distance from mainstream society by sticking close to their insular neighborhoods and dedicating their lives to study and prayer. With government acquiescence, they also have skipped military service, which is compulsory for most Jewish men.

The issue of military service is at the core of a cultural war over the place of ultra-Orthodox Jews in Israeli society today.
Draft exemptions go back to Israel’s establishment in 1948, when the government allowed several hundred gifted students to pursue religious studies. The number of exemptions has grown over the years, with thousands of young religious men evading the draft to pursue seminary studies while most other Jewish men are conscripted for three years of mandatory service.

The exemptions have caused widespread resentment toward the ultra-Orthodox and were a central issue in parliamentary elections last year.

Ultra-Orthodox leaders have vowed to resist the new law. They insist their young men serve the nation through prayer and study, thus preserving Jewish learning and heritage, and by maintaining a pious way of life that has kept the Jewish faith alive through centuries of persecution. They fear integration into the secular military will undermine their lifestyle, in which older men often avoid the workforce and collect welfare stipends while continuing to study full time.

Leaders of the community say their ancient brand of Judaism is under siege and their followers would rather sit in jail than join the military. Tens of thousands have staged large demonstrations against the new law and warn of an uprising if it is carried out.

But quietly, ultra-Orthodox soldiers have been growing in numbers. According to the military, some 1,860 joined last year, up from 288 in 2007.

It’s a far cry from the high participation rates among secular and modern Orthodox youth, but nonetheless reflects a new openness in the community.

Due to its high birthrate and the relatively low participation in the workforce, the ultra-Orthodox community suffers from high unemployment and poverty. There’s been increasing questions over the ultra-Orthodox education system, which teaches students about Judaism but very little math, English or science.

More than a quarter of all Israeli first-graders are ultra-Orthodox and government statistics project that if these trends continue, the ultra-Orthodox could make up 15 percent of the country’s population by 2025. Currently, the community is less than 10 percent of Israel’s 8 million people.

The ultra-Orthodox have shown a growing willingness to allow those who are not full-time seminary students to join the military. But Yerach Tucker, a spokesman for the community, said that trend likely would reverse now that they feel under fire.

“Things were changing quietly behind the scenes but now it is a war,” Tucker said.

Some of those serving in the military have been branded as collaborators and faced harassment and assaults by ultra-Orthodox extremists. Prigan said he has had insults hurled his way and his 5-year-old son was even told that his father was a “hardak” _ an insulting combination of haredi and insect.

But he says he is not deterred and thinks he represents the wave of the future.

“I tell my son that daddy is protecting the people of Israel, daddy is doing what is needed and that is what is important,” Prigan said.

“What the rabbis are afraid of is (their) culture changing. Slowly, slowly, it is seeping through. Rome was not built in a day. It’s a change that seeps through as this concept is collapsing. The walls of the ghetto will fall one day,” he added. “It is possible, we must do it. This is our war. From this unit a battle is starting, it’s a battle for unity, a battle to bring people together.”