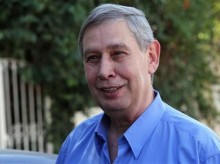 TEL AVIV, Israel (AP) — It used to be that if you wanted to join one of the world’s most secretive espionage organizations you had to sneak into a foreign embassy, answer a cryptic newspaper ad or show up in a nondescript building in Tel Aviv to meet a shadowy recruiter. Now all it takes to apply for a job at Israel’s Mossad spy agency is a click of the mouse.

The typically hush-hush Mossad revamped its website last week to include a snazzy recruiting video and an online application option for those seeking employment. With versions in Hebrew, English, French, Russian, Arabic and Persian, the sleek site looks to revolutionize the way Israel’s legendary agency seeks out potential agents after generations of backdoor, cloak-and-dagger antics.

“We must continue to recruit the best people into our ranks so that the Mossad might continue to lead, defend and allow for the continued existence of the state of Israel,” Mossad Chief Tamir Pardo said in a statement announcing the launch. “The Mossad’s qualitative human capital is the secret of our success.”

The Mossad, Hebrew for “The Institute,” is short for the “Institute for Intelligence and Special Operations.” It is the global arm of Israel’s vaunted intelligence community and believed to be behind some of the most daring counterterrorism covert operations of the past century. Only a few have come to light, such as the killing of the leaders of Black September — the Palestinian group behind the massacre of Israeli athletes at the 1972 Munich Olympic Games — and Israeli assassinations across Africa, Europe and the Middle East.

There’s more to the Mossad than its James Bond aura, however, and you are more likely to land a job in its technology, cyber or administration departments than you are to become an international man — or woman — of mystery. But the site alludes to its secretive nature with a video showing satellites and drones hovering as well as men and women dressed in suits hacking into computers and carrying out surveillance operations.

A narrator says “your imagination is my reality” and the banner at the top of the page reads “join us to see the invisible and do the impossible.”

Aside from its initial announcement, the agency has been tightlipped about the new media strategy. But at least one former operative thinks the outreach is a good idea.

“It’s the 21st Century. This gives them the chance to reach the kind of people they have never reached before,” said Gad Shimron, who served in the Mossad for a decade and later wrote “Mossad Exodus,” a book about its secret operation to bring Ethiopian Jews to Israel. “They’ve got nothing to lose. If you throw out a line you may hook a fish.”

Shimron said the Internet may draw in some weirdos and perhaps a few hostile elements but the Mossad was fully capable or weeding out the best as it cast a larger net.

Shimron said the Mossad used to be more of an “old boys network” with friends recruiting their friends and family. Ads offering “interesting jobs” would occasionally show up in the classified sections and those with multiple passports and a proper security clearance from their military service could get a call, inviting them to an interview. But the options for walk-ins were limited. With the increase of video cameras worldwide, physically walking into an Israeli embassy has become more risky for those afraid of being exposed.

The Mossad insists its online option is safe and discreet.

“Rest assured that all approaches will be treated with the utmost discretion and confidentiality so that your personal safety is ensured,” the instructions read. “When filling in the form, we suggest you consider whether the computer you are using and your location is secure enough. It would be safer to fill in the form using means that are not directly connected to you. We also recommend erasing the browsing history upon completion of the form.”

In going online, the Mossad appears to be taking a page out of the playbook of its domestic equivalent, the Shin Bet security service, which launched its online recruiting campaign in 2006. It still maintains a comprehensive website that includes terrorism statistics, an in-depth history of the organization that details its past operations and a vast portal of career opportunities.

The Mossad, naturally, is shrouded in more secrecy. The site includes some background on its origins and perhaps its most famous operation — the capture of Nazi mastermind Adolf Eichmann in the 1960s. But its activity description is vague and dozens of other well-known operations linked to it are nowhere to be found.

In his online welcome address Pardo explains why.

“Information about the Mossad’s activity does not reach the public, and often what is publicized many years after the event is but the tip of the iceberg of almost imaginary activity and operations,” he writes. “This website gives you a brief glimpse of the Mossad, and will reveal only a little of its past and activity.”