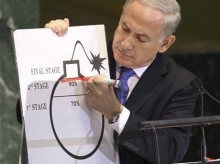 UNITED NATIONS (AP) — In his most detailed plea to date for global action against Iran’s nuclear program, Israeli Prime Minister Benjamin Netanyahu said Thursday the world has until next summer at the latest to stop Iran before it can build a nuclear bomb.

Netanyahu flashed a diagram of a cartoon-like bomb before the U.N. General Assembly showing the progress Iran has made, saying it has already completed the first stage of uranium enrichment.

Then he pulled out a red marker and drew a line across what he said was a threshold Iran was approaching and which Israel could not tolerate — the completion of the second stage and 90 percent of the way to the uranium enrichment needed to make an atomic bomb.

“By next spring, at most by next summer at current enrichment rates, they will have finished the medium enrichment and move on to the final stage,” he said. “From there, it’s only a few months, possibly a few weeks before they get enough enriched uranium for the first bomb.”

Israel considers a nuclear-armed Iran to be an existential threat, citing Iranian denials of the Holocaust, its calls for Israel’s destruction, its development of missiles capable of striking the Jewish state and its support for hostile Arab militant groups.

Eshagh Al Habib accused Netanyahu of using “an unfounded and imaginary graph” to justify a military threat against Iran.

“Iran is strong enough to defend itself and reserves its full right to retaliate with full force against any attack,” he said.

Al Habib urged the international community to exert pressure on Israel to end its “irresponsible behavior” and to join the Nuclear Nonproliferation Treaty as a non-nuclear weapon party and put all its nuclear facilities under U.N. safeguards. Israel is widely believed to possess nuclear weapons but has never acknowledged it.

Neither the U.S. nor any of its international partners are ready to abandon diplomacy in favor of military or other actions to resolve the decade-long standoff over Iran’s nuclear program.

On Thursday, six world powers decided to lay the groundwork for another round of negotiations with Iran, a senior U.S. official said, but they want a significantly improved offer from the Islamic republic.

The new hope for negotiated end came after U.S. Secretary of State Hillary Rodham Clinton met with the foreign ministers of Britain, China, France, Germany and Russia — powers that have sought, over several rounds of talks, to persuade Iran to halt its production of material that could be used in nuclear weapons.

The latest stab at a diplomatic compromise collapsed this summer after Iran proposed to stop producing higher-enriched uranium in exchange for a suspension in international sanctions, which Clinton has termed a “nonstarter.” The U.S. official said Iran would have to bring a much better offer to the table this time, but stressed that nations were seeing some signs for optimism and that diplomacy remained “far and away the preferred way to deal with this issue.”

No date was set for the possible resumption of the so-called P5+1 talks with Iran, said the U.S. official, who spoke on condition of anonymity because she wasn’t authorized to comment publicly about the closed-doors meeting at the United Nations.

After looking for a diplomatic solution there, Clinton met later Thursday with Netanyahu at a New York hotel where she was expected to hear the alternative argument for possible military action.

Their face-to-face occurred just hours after the Israeli presented his case to the world just why a nuclear armed Iran would be a danger to many countries.

Casting the battle as one between modernity and the “medieval forces of radical Islam,” Netanyahu said deterrence would not work against Iran as it had with the Soviet Union.

“Deterrence worked with the Soviets, because every time the Soviets faced a choice between their ideology and their survival, they chose survival,” he said. But “militant jihadists behave very differently from secular Marxists. There were no Soviet suicide bombers. Yet Iran produces hordes of them.”

Netanyahu has repeatedly argued that time is running out to stop Iran from becoming a nuclear power and that the threat of force must be seriously considered. Israeli leaders have issued a series of warnings in recent weeks suggesting that if Iran’s uranium enrichment program continues it may soon stage a unilateral military strike. This week Iranian leaders suggested they may strike Israeli preemptively if they felt threatened, stoking fears of a regional war.

President Barack Obama has vowed to prevent Iran from becoming a nuclear power but has rejected Netanyahu’s demands for setting an ultimatum past which the U.S. would attack. His administration has urgently sought to hold off Israeli military action, which would likely result in the U.S. being pulled into a conflict and cause region-wide mayhem on the eve of American elections. Netanyahu’s 2013 Israeli deadline could be interpreted as a type of concession, but Israeli officials insisted action was still needed immediately and that in his speech Netanyahu was referring to the absolute point of no return.

Netanyahu appeared to be trying to soothe his differences with the White House when he thanked Obama’s stance, adding that his own words were meant only to help achieve the common goal.

And he thanked the U.S. and other governments that have imposed sanctions which, he said, have hurt Iran’s economy and curbed its oil exports but have not changed Tehran’s intentions to develop the capacity to build nuclear weapons.

“I believe that faced with a clear red line, Iran will back down. This will give more time for sanctions and diplomacy to convince Iran to dismantle its nuclear weapons program altogether,” the Israeli prime minister said. “Red lines don’t lead to war, red lines prevent war.”

Netanyahu did not detail what should be done if his “red line” was crossed, but the insinuation was clear. In perhaps his final plea before Israel felt the need to take matters into its own hands, Netanyahu pounded away at the dangers posed by Iran.

Iran insists its nuclear program is for peaceful purposes, but Israel, the U.S. and other Western allies suspect otherwise. Four rounds of U.N. sanctions have already been placed on Iran.

A U.N. report last month only reinforced Israeli fears, finding that Iran has moved more of its uranium enrichment activities into fortified bunkers deep underground where they are impervious to air attack. Enrichment is a key activity in building a bomb, though it has other uses as well, such as producing medical isotopes.

While Israel is convinced that Iran is pursuing a nuclear weapon, American officials believe Iran has not yet made a final decision to take the plunge and that there is still time for diplomacy.

Netanyahu argued Thursday that “Iran uses diplomatic negotiations as a means to buy time to advance its nuclear program.”

Israel’s timeline for military action is shorter than that of the United States, which has far more powerful bunker-busting bombs at its disposal, and there is great suspicion in Israel over whether in the moment of truth Obama will follow through on his pledge.

Netanyahu has a history of fiery speeches about Iran before the U.N. General Assembly.

In 2009, he waved the blueprints for the Nazi death camp Auschwitz and invoked the memory of his own family members murdered by the Nazis while making his case against Iran’s Holocaust denial and threats to destroy Israel. And last year, he warned about “the specter of nuclear terrorism” if Iran were not stopped.

While the bulk of Netanyahu’s speech dealt with Iran, he also rebuked Palestinian President Mahmoud Abbas, who spoke shortly before him to the U.N. General Assembly and accused Israel of ethnic cleansing for building settlements in east Jerusalem.

“We won’t solve our conflict with libelous speeches at the U.N.,” Netanyahu said. “We have to sit together, negotiate together and reach a mutual compromise.”

Israel captured the eastern part of Jerusalem from Jordan during the 1967 Mideast War and later annexed it in a move that hasn’t been recognized internationally. The Palestinians claim east Jerusalem as the capital of their future state along with the Gaza Strip and the rest of the West Bank.

In his speech, Abbas also said he had opened talks on a new bid for international recognition at the U.N.

The Palestinians will apply to the General Assembly for nonmember state status, in stark contrast to last year’s failed bid to have the Security Council admit them as a full member state.

If Palestine does become a U.N. observer state, it will not have voting rights in the world body but will have international recognition as a “state.” This could enhance the possibility of the Palestinians joining U.N. agencies and becoming parties to treaties including the International Court of Justice or the International Criminal Court.

Abbas insisted that the new quest for recognition was “not seeking to delegitimize Israel, but rather establish a state that should be established: Palestine.”