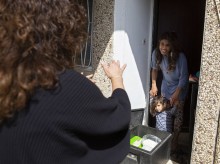 RAANANA, Israel (AP) — While hunkering down at home and keeping three young children entertained in coronavirus isolation, Adi Karmon Scope had a thought: How much harder was it for those on the front lines of the pandemic?

So Karmon Scope, a 44-year-old startup entrepreneur took to Facebook to ask Israelis to assist both the health care professionals who are saving lives while braving exposure in long hours at hospitals, and the families they have left behind.

The result has been staggering.

In less than three weeks, more than 10,000 have signed up to “Adopt A Doc.” Besides providing for needed protective gear and other medical supplies, an army of volunteers has carried out grocery shopping, delivered homecooked meals, babysat for children and even walked the pets of health care providers.

In Israel, more than 10,000 people have contracted the coronavirus and 92 have died. The government has imposed severe restrictions on movement to try to quell the rapid spread, including a near-closure on especially vulnerable neighborhoods.

With the Israeli workforce largely homebound due to stringent regulations, and the economy slowed to a near standstill, Karmon Scope has enjoyed the robust engagement of tech-savvy Israelis with time on their hands. They’ve built a website that pairs volunteers with nearby doctors, nurses and other overworked medical personnel. Nearly 1,000 now have a designated volunteer who cares for their personal needs, including finding them parking spots in crowded urban centers when they return home from late shifts. Some 3,000 other volunteers offer support in other ways.

The grassroots organization now has a coordinator at every hospital in the country, has secured donations from private catering companies and its lobbying effort with local municipalities has produced various gestures toward the doctors.

Einat Kedem, a 51-year-old digital project manager from Raanana in central Israel, said the least she could do was contribute her cooking skills. Three times a week, she’s been delivering vegan meals to the home of Maayan Bacher, an emergency room doctor who’s been too overwhelmed to prepare healthy meals for her two children.

“We’re all at home these days with nothing to do and this is a way to feel like we are part of something,” she said.

Bacher was initially hesitant to seek assistance, saying that as a doctor she was used to providing aid, not receiving it. But her children have fallen in love with Kedem’s pasta dishes and an intimate relationship has since evolved in which the family now feels free to reach out to Kedem and express their profound appreciation.

“It’s heartwarming that people care about us,” she said upon receiving a delivery. “It’s a good feeling to be appreciated cause, after all, we came into this job basically just to help people.”

While nonstop global news about the effects of the coronavirus have become commonplace, so, too, are the stories about the kindness of strangers and individuals who have sacrificed for others. “One Good Thing” is an AP continuing series reflecting these acts of kindness.