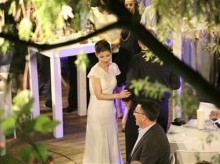 Gideon Saar and Geula Even at their wedding in Tel Aviv. (AP Photo)

Together they have emerged as the country’s most high-profile power couple, with every step of their budding romance chronicled by paparazzi and gossip columnists. Beyond the headlines, though, newlyweds Gideon Saar and Geula Even have also generated a debate over what some critics say is already an incestuous relationship between politicians and the press.

Suspicions run deep in Israel, a small country with a long tradition of reporters befriending those they cover and a revolving door between the two professions. Media ownership is tightly concentrated, with some outlets harboring distinct political agendas.

The Saar-Even partnership is the most obvious manifestation of these worlds intersecting. Both are recently divorced and have children from previous marriages, and the disclosure that Even is pregnant has added to the intrigue. Their wedding last month was a top news story in Israel, immediately drawing speculation over how Even could objectively cover a political world in which her husband is such a major player.

“In a perfect world, this kind of relationship is a problem. But this is a small community and we have to learn to live with it,” said Hanoch Marmari, editor-in-chief of the Seventh Eye, a media watchdog website. “At least it is out in the open and everyone knows they have to be careful. I don’t think their job performance will be influenced, and if it is, we will know how to handle that, too.”

Israel TV is supposed to be insulated from government control, run by an independent board of directors. Other main TV channels are privately owned but licensed by the government.

To be sure, Israel is not alone in coping with the potential conflict of interests that arise from such strange bedfellows.

Maria Shriver decided to take leave from NBC News when her then-husband, Arnold Schwarzenegger, ran for governor of California; her NBC colleague Andrea Mitchell stayed on the air throughout her spouse Alan Greenspan’s tenure as chairman of the Federal Reserve. James Rubin remained in his position as State Department spokesman in the Clinton White House after marrying CNN reporter Christiane Amanpour.

France has seen several high-profile politician-journalist couples. Prominent TV star Anne Sinclair quit journalism when her then-husband, Dominique Strauss-Kahn, joined the government in the 1990s. She left Strauss-Kahn, who later became head of the International Monetary Fund, after he faced a string of sex-related scandals in recent years. She has since resumed journalism and is now chief editor of the French Huffington Post.

French President Francois Hollande’s partner is a well-known political journalist. Valerie Trierweiler has continued to work for the Paris Match magazine since his election last year, writing occasional literary columns and drawing both criticism and praise for her choice to keep writing.

In her first postelection article, she wrote an essay in praise of Eleanor Roosevelt, who worked as a journalist while her husband was U.S. president.

“Look! A journalist first lady isn’t anything new,” Trierweiler wrote. “Clearly, we have to look to the other side of the Atlantic to find this . and not scream about a scandal.”

In Israel, a country of just 8 million people, close links between media and public office have gone on for years.

Finance Minister Yair Lapid anchored a top-rated weekend news program on Channel 2 TV that served as a critical pulpit before he jumped into politics last year.

Opposition leader Shelly Yachimovich, a former TV journalist, interviewed the Labor Party chairman in 2005 two weeks before he drafted her to his party. Following that move, the Israeli broadcast regulator mandated a three-month cooling-off period on any journalist looking to join a political party.

Netanyahu relies on the unflinching support of Yisrael Hayom, a free mass-circulation tabloid established by Jewish-American billionaire Sheldon Adelson with the aim of backing Netanyahu. Its main competitor, Yediot Ahronot, is owned by the family of socialite and commentator Judy Shalom Nir-Mozes — the wife of Silvan Shalom, a minister in Netanyahu’s Cabinet.

Saar, 46, who has finished first in the past two primaries of the ruling Likud Party, is currently interior minister and often mentioned as a successor to Netanyahu. The 40-year-old Even, the first woman to anchor a main evening news broadcast in Israel, hosts a daily political interview show.

After news of their relationship emerged, so did the rumblings. Prior to January elections, Even excused herself from moderating a panel on education because Saar served as education minister at the time.

Israel TV executives reportedly later held meetings over whether she could anchor election night coverage before giving her the go ahead. Israel TV refused comment, as did Even. Saar’s spokeswomen did not respond to several calls and emails.

Marmari, a former editor of the liberal Haaretz daily, said he was more concerned about any secret romances out there and saw no reason for either Saar of Even to alter their current job status.

Others have been less forgiving.

“Even can be trusted to do her best to deliver an impartial broadcast, but one has to admit that it is simply impossible,” wrote Kalman Lipskind, a columnist for the Maariv daily. “It’s clear that as long as he is in his position she can’t be in hers. It’s not nice. She doesn’t deserve it, but there is no other way.”

While Saar and Even’s relationship is unprecedented here, Israeli journalists and politicians have long been “in bed” with each other.

The late journalist Uri Dan was a longtime confidant of Ariel Sharon. Ehud Olmert considered a trio of top Israeli journalists among his closest friends. One of them, Dan Margalit, was a staunch supporter for years before the two had a nasty, public falling out. Margalit later became a vociferous critic and led calls to push Olmert out of office because of corruption allegations.

Just last week, Tzipi Hotovely, a former TV commentator turned Likud lawmaker invited virtually all of the country’s senior politicians and media personalities to her wedding, where they mingled among more than 2,000 guests.

“There are those who defend their friendships with politicians as a way of gaining access. But history proves that they never actually end up writing anything critical of their friends,” said Dror Globerman, a TV journalist and host of “People,” a current affairs documentary TV show on Channel 2 that recently focused on the Saar-Even relationship.

Globerman said the fact that it was out in the open was the most encouraging sign.

“Many of the journalists are connected to politicians somehow, and many have their own interests and agendas,” he said. “There is a sense that we are in an era of declining ethics and integrity in journalism, and they (Saar and Even) are such an obvious target for those who think they are holier than thou. Their case is problematic, but it is much better than the hidden agendas and unseen interests that are out there.”