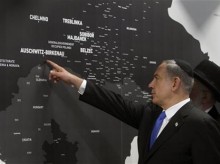 Israeli Prime Minister Benjamin Netanyahu points at a map showing where Jews were killed during the Holocaust. (AP Photo/Czarek Sokolowski)

OSWIECIM, Poland (AP) — Standing in front of a former prisoner block at the infamous Auschwitz death camp, Israeli Prime Minister Benjamin Netanyahu accused the world Thursday of not doing enough to stop the Holocaust and said Israel can only rely on itself to prevent such a tragedy from ever happening again.

The scathing speech marked the most dramatic point of a two-day visit to Poland, a trip that comes as Netanyahu urges the world to put forth a credible military threat against Iran and its burgeoning nuclear program.

Netanyahu has long linked the Holocaust with Iranian threats toward Israel, and has faced disapproval for doing so. In defiance of his critics, he clearly chose Auschwitz as the venue for his latest salvo because of its symbolic significance as the site of some of the worst crimes ever committed against the Jewish people.

Though he never mentioned Iran by name, he suggested that Israel faces dangers that parallel the Holocaust, when 6 million Jews were killed by Nazi Germany, using harsher language than he usually does.

“The leaders of the Allies knew about the Holocaust in real time. They understood exactly what was happening in the death camps. They were asked to act, they could have acted and they did not,” he said, in front of a red-brick building where he inaugurated a new pavilion to educate visitors.

“For us Jews, the lesson is clear. We must not be complacent in the face of threats of annihilation. We must not bury our heads in the sand or allow others to do the work for us,” he said. “From here, the place that attests to the desire to destroy our people, I, as prime minister of Israel, the state of the Jewish people, tell the nations of the world: the state of Israel will do whatever is necessary to prevent another Holocaust. Because also today there are those who express their intention to destroy millions of Jews and to wipe their state off the face of the earth.”

Israel considers Iran its greatest threat because of its support of Islamic militant groups, its questioning of the Holocaust, its arsenal of long-range missiles and primarily its advanced nuclear program. Iran insists its uranium enrichment program has only peaceful goals.

Auschwitz remains the most vivid symbol of the cruelty of Nazi Germany’s genocide of World War II. More than 1.1 million Jews died in Auschwitz and the adjacent Birkenau death camp in gas chambers or from starvation, disease and forced labor.

The camps were the most notorious in a system that Nazi Germany built and operated in occupied Poland, home to Europe’s largest Jewish population and at the heart of a railway network that allowed the Nazis to easily transport Jews there from elsewhere in Europe.

The new exhibit in Block 27 presents Auschwitz in the larger context of the Nazis’ systematic attempt to exterminate Europe’s Jews. The initial exhibit meant to tell the Jewish narrative was erected under communist rule in the 1960s. Over time, though, it became neglected and outdated and most visitors ignored it.

Following the visit of then-Prime Minister Ariel Sharon in 2005, Israel decided to revamp the exhibit.

The result is “Shoah,” an $8-million exhibit that presents a 360-degree montage of vibrant pre-war Jewish life in Europe, drawings of some of the 1.5 million Jewish children murdered in the Holocaust, videos of survivor testimonies and recordings of the anti-Semitic speeches of Nazi leaders.

Curated by Israel’s Yad Vashem Holocaust memorial, the exhibit aims to provide a backdrop to the Holocaust for a first-time visitor, presenting the racist Nazi ideology that led to the killings and the struggles of the victims and those who survived.

“We felt it our duty to recount the comprehensive story of the Shoah, the story of the Jews that were persecuted and murdered, here and across Europe, only because they were Jews,” said Yad Vashem Chairman Avner Shalev.

To highlight the extent of the carnage, Yad Vashem displayed the 4.2 million names of Holocaust victims it has painstakingly gathered over the years in a massive collection of pages stretching 14 meters (yards) long. Among the list, Netanyahu found the name of Yehudit Hun, the twin sister of his late father-in-law, killed in Bilgoraj, in southeastern Poland.

“If there are Holocaust deniers, have them come to Block 27 and go over the names, one at a time,” he said, in a clear reference to Iran’s President Mahmoud Ahmadinejad, who questions the extent of the Holocaust. “There are those who say that the approach to Jews in the world has changes since the Holocaust. And I say what has really changed?”

Yaacov Silberstein, an 88-year-old Auschwitz survivor who returned for Thursday’s ceremony, remembered the camp where he endured three years of horror between 1942-1945.

“There didn’t use to be grass here. If there had been we would have eaten it since there was nothing else to eat,” he said aboard the prime minister’s plane back to Israel.

On his arm, the number 68743 remained inked. “How did I stay alive there? It was a gift from the heavens,” he said. “We must never let what happened here be forgotten.”