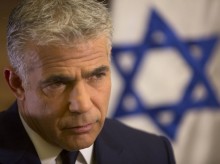 Yair Lapid gives an interview in his office at the Knesset, Israel's parliament. ( AP Photo/Sebastian Scheiner)

JERUSALEM (AP) — A leading Israeli opposition figure said Monday that embattled Israeli Prime Minister Benjamin Netanyahu has turned a U.S. initiative for ending conflict with the Palestinians into a campaign “stunt” by pushing for the immediate annexation of West Bank settlements.

Co-leader of the Blue and White party Yair Lapid insisted he was against unilateral steps endangering what he described as President Donald Trump’s promising Mideast plan. He expressed hope that the Palestinians would come around to negotiating based upon the U.S. blueprint.

Lapid is slated to become Israel’s next foreign minister if his party prevails in the March 2 election and fellow party leader Benny Gantz wins the premiership.

“Nobody expects Israel or the Palestinians to take the plan face value the way it is and just make sure it happens. Everybody understands this is a framework, a very detailed one,” he told an audience of foreign correspondents in Jerusalem, before zoning in on Netanyahu.

Lapid went on to condemn what he said was the prime minister’s planned “unilateral steps” to annex parts of the occupied West Bank.

“This is something that came out from the prime minister’s office right after the plan was presented. Probably, it seems, for campaign reasons. And this is something you don’t do. This is too serious to become a stunt in the campaign,” he added.

The Trump plan is widely viewed as being favorable to Israel since it would allow it to eventually extend sovereignty over all of its West Bank settlements along with the strategic Jordan Valley.

The Palestinians have angrily rejected the U.S. plan since it would provide the Palestinians with limited autonomy in several chunks of territory with a capital on the outskirts of Jerusalem, and only if they meet stringent conditions.

Netanyahu has sought to sell the plan, and his close relationship to Trump, as a testament to his master statesmanship ahead of the country’s third elections in less than a year. He’s also seeking to galvanize his hard-line base by annexing territory ahead of the election. The proposed move could establish facts on the ground that would be difficult to reverse, and make the prospect of a contiguous Palestinian state all but impossible.

But he’s been forced to walk that pledge back under criticism from the typically like-minded Trump administration that has chided Israel’s zest for annexation.

U.S. Ambassador to Israel David Friedman reiterated that concern, saying Sunday that such a move was “subject to the completion of a mapping process by a joint Israeli-American committee,” and warning that rushing it undermines the plan.

“The president put out a plan for the next hundred years, not the next 30 days,” he said, alluding to the upcoming election.

Visiting the Jordan Valley on Monday for a tree planting ceremony, Netanyahu insisted he’d be patient and only impose Israeli law on any territory there “in agreement with the Americans.”

The Palestinians seek the West Bank, Gaza Strip and east Jerusalem — areas captured by Israel in the 1967 Mideast war — for an independent state. The U.S. is eager to keep the option of statehood on the table.

Lapid, whose centrist party is seeking to unseat Netanyahu, would not detail how his vision differed from Netanyahu’s beyond saying he would favor direct negotiation with the Palestinians rather than imposing a framework upon them.

“We are against anything that is unilateral,” he said.

At the same time, he called on Palestinian President Mahmoud Abbas to drop his intransigence, realize that time is not working in his favor and take a serious look at the plan as a basis for talks.

“Our approach to the Palestinians is to tell them that always saying ‘no’ isn’t a policy,” he said. “If instead of always automatically responding with violence and threats, they will take the time to delve deeply into the Trump plan they will see that it contains many opportunities for the Palestinian people.”

With Gantz at the helm, Blue and White is polling ahead of Netanyahu’s Likud three weeks before the election. Both sides are looking for a final surge to put them over the top after two deadlocked elections that did not produce a clear winner.

Lapid said Likud was a viable option to partner with but that his party would not join forces with Netanyahu, who has been indicted on three separate corruption charges.

Beyond the moral message, Lapid said Netanyahu was incapable of implementing the Trump plan or tackling any other major challenge given his pending corruption trial and the stagnation that comes with his lengthy rule.

“What is happening to him is the same thing that happens to every leader who holds on to power for too long – the unholy trinity: Corruption, loss of empathy, no new ideas,” Lapid said.