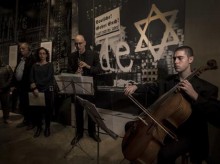 JERUSALEM (AP) — For the first time in Yad Vashem’s 63-year history, live music echoed through the halls of Israel’s national Holocaust memorial in a somber tribute to the works of musicians who created a vibrant cultural life in the Terezin concentration camp before they were sent to their deaths.

Standing upon replicas of train tracks and against a backdrop of Nazi flags and images of emaciated prisoners, a trio of musicians performed Monday evening along the snaking corridors of the famed Jerusalem museum to mark 75 years since Terezin’s founding.

“To talk just about murder does not convey even a smidgen of what was lost. What was lost was the life and creation of these people, and I think they themselves would like to be remembered for how they lived rather than how they were murdered,” said Avia Doron, a senior Yad Vashem guide.

While some camps served as factories of death or provided slave labor, Terezin was more of a ghetto that served as a propaganda tool for the Nazis, who cynically described it as a “spa town” where elderly German Jews could “retire” in safety. It was once even cleaned up and showcased to a visiting International Red Cross delegation to show how humanely the Jews were being treated.

In reality, Terezin, 40 miles (60 kilometers) northwest of Prague in what was then German-occupied Czechoslovakia, served largely as a collection camp for deportations to the killing centers of Eastern Europe. Rife with disease and starvation, some 35,000 prisoners perished there.

Still, its relatively privileged status allowed for a semblance of normalcy, and as the most western ghetto in the Nazi system of oppression, it drew much of the Jewish cultural elite of Germany and Austria, including many well-known artists, musicians and writers. Despite the harsh conditions and the constant threat of deportation, a lively musical scene emerged that was initially conducted in secret but later tolerated — and sometimes even enjoyed — by the Nazis.

For the prisoners, music provided a refuge, a sense of meaning and even a form of resistance. Allowed to bring only a few of their personal possessions, many chose to keep their musical instruments. Some even managed to smuggle in a piano.

“Their desire for music, for art, was as equal as their desire to live. It’s their way of expressing everything that is possible, with the short time that they knew that they had, and it’s also one way to protest,” said Dan Rapoport, the event’s musical director.

For the past 20 years, Rapoport, an accomplished clarinetist and conductor, has been studying the unique ghetto-camp, also known by the German name Theresienstadt.

Accompanied by a violin and cello, and at times a soprano whose voice sent shivers through the museum, he performed the works of composers such as Viktor Ullmann, Gideon Klein and Zigmund Schul — whose creations survived even if they did not. The pieces were performed for a small group of visitors as they walked through the museum, and then before several hundred people in an auditorium.

Violinist Eyal Shiloach said the performance aimed “to bring their sound, their voices back to life.”

Rapoport said he considered the museum halls to be literally a “dead space,” where visitors had no dialogue with the faces on the wall. His inspiration for the event, he said, was to hear what the victims had to say through their music.