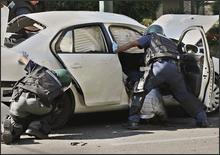 TEL AVIV, Israel — A bomb exploded in a car carrying one of Israel’s top mafia kingpins on Monday, killing him and threatening to unleash an all-out war in Israel’s increasingly violent underworld.

Israeli police officials identified the dead man as Yaakov Alperon – known informally as “Don Alperon” – the head of one of the country’s most powerful crime families. The bloodied body was wearing the same polo shirt Alperon was seen sporting earlier in the day at a Tel Aviv courthouse.

Medics said three bystanders were also lightly wounded in the explosion, including a 13-year-old boy.

Israelis are accustomed to violence with their Palestinian neighbors but have traditionally felt relatively safe from violent crime. In recent years, however, mob wars also have plagued Israeli towns and cities.

Rival underworld gangs have waged bloody battles for control of gambling and protection rackets, including one involving bottle recycling.

They target each other with bullets, bombs and even anti-tank missiles in violence that has killed dozens of gangsters and at least eight bystanders in the last three years. Monday’s noontime attack was by far the most high-profile to date.

The explosion came as Alperon returned from a courthouse where his son, Dror, was facing extortion charges.

The brazen, midday assassination quickly dominated the news, pushing Palestinian rocket attacks from Gaza and a summit between the Israeli and Palestinian leaders off the airwaves. TV stations broke into their scheduled programming.

Police officials identified the victim as Alperon, speaking on condition of anonymity because the identification had not been officially made public. Police spokesman Micky Rosenfeld would say only that he was a “well known” underworld figure.

Alperon, Israel’s most famous criminal, had also become something of a cultural icon. He and his brothers have given frequent TV interviews and were parodied on comedy shows. His immediate family even took part in a reality TV show.

Alperon had many enemies, including convicted drug lord Zeev Rosenstein – who himself has survived at least seven assassination attempts – and the rival Abutbul and Abarjil families, with whom the Alperons battled over a lucrative bottle recycling racket.

Bottle recycling adds up to a $5 million-a-year industry, according to estimates by police and environmental groups. Police say criminals sell restaurants protection in exchange for empties, which leave no paper trail and offer crime families a relatively legitimate source of income.

Organized crime, long overshadowed by the Arab-Israeli conflict, has become such a part of everyday life that Israel has its own “Sopranos”-style TV series, “The Arbitrator,” in which even synagogues are no refuge from hit men.

In the past, rival families would settle their scores quietly. But as the pot gets richer they are getting bolder, taking more risks and posing a greater threat to public safety. Most crime bosses now travel with bodyguards in armored vehicles.

Last May, Yaakov Alperon’s older brother, Nissim, survived the ninth assassination attempt against him. A three-man hit team dispatched to get him was intercepted by police, and in the ensuing gunbattle a policeman was seriously wounded and one of the gunman was killed.

Yossi Sedbon, a former Tel Aviv police chief, told Army Radio that further bloodshed was likely. “This battle between gangs of criminals will continue and the family will make great efforts to avenge his death,” he said.

The mob violence has underscored police’s inability – and even unwillingness – to stop organized crime.

Policemen have been caught feeding information to the mob, and last year, the national police chief was forced to resign after a government commission found he ignored ties between senior officers and underworld figures.