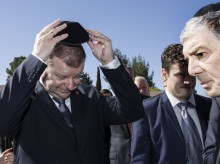 Lithuania is among a slew of former communist nations swept up in a wave of World War II-era revisionism that seeks to diminish their culpability in the Holocaust while making heroes out of anti-Soviet nationalists involved in the mass killing of Jews. In Israel, established in the wake of the Nazi genocide of 6 million Jews, many say Netanyahu is cynically betraying the victims’ memory.

Lithuania, for instance, has been a leading force behind creating a joint memorial day for all victims of totalitarianism, blurring the distinction between the crimes of the Nazis and the communists who fought them.

It also has pushed for legislation to prohibit the sale of books that “distort Lithuanian history” by citing the rampant, documented collaboration of the local population with Nazis. Most recently it has resisted calls to remove the various plaques commemorating anti-Soviet fighter Jonas Noreika, despite recent revelations by his own granddaughter, Silvia Foti, that he was a fierce anti-Semite who had a role in the murder of thousands of Jews.

Nearly all of Lithuania’s 200,000 Jews were killed in the Holocaust.

When Netanyahu, who has Lithuanian roots, visited Vilnius last year, he praised Prime Minister Saulius Skvernelis for taking “great steps to commemorate the victims of the Holocaust” and for fighting modern-day anti-Semitism.

“It’s unforgivable. Netanyahu is giving them a green light,” said Efraim Zuroff, the chief Nazi-hunter of the Simon Wiesenthal Center. “It’s like praising the Ku Klux Klan for improving racial relations in the South.”

“We have to say the truth. We owe it to the victims,” he added.

In a meeting with Israeli President Reuven Rivlin on Tuesday, Skvernelis said “Lithuania has been learning the lessons of the past” and was “improving the life of the Jewish community and restoring historical sites.”

At Tuesday’s meeting, Netanyahu treaded cautiously. He referred to the “tragedies of the past” but steered clear of any criticism of modern Lithuania, praising the “spirit of friendship” and “a bridge from the past to a future.”

Skvernelis’ visit comes a week after Netanyahu similarly rolled out the red carpet for President Petro Porochenko of Ukraine, whose parliament just designated the birthday of Ukrainian wartime collaborator Stepan Bandera a national holiday. A regional legislature declared 2019 “the year of Stepan Bandera.”

Bandera’s forces fought alongside the Nazis and were implicated in the murder of thousands of Jews. As Porochenko was visiting Israel, another memorial was being erected in Kiev for Symon Petliura, whose troops are linked to pogroms that killed as many as 50,000 Jews after World War I.

Netanyahu’s outreach in eastern Europe is part of his larger strategy of forging alliances to counter the criticism Israel faces in the United Nations and other international forums over its policies toward the Palestinians.

Critics consider it a deal with the devil. They say Netanyahu — who often invokes the Holocaust when inveighing against archrival Iran — turns a blind eye when it comes to like-minded allies.

The prime minister’s office did not respond to a request for comment.

Under communist rule, the Holocaust was not seriously dealt with and, upon independence, the newfound eastern and central European nations sought to canonize nationalist icons who resisted the Soviets, while largely ignoring their crimes alongside the Nazis. Domestic academics who have challenged the false narrative have been shamed, and external criticism has often been met with new anti-Semitic outbursts.

For countries like Lithuania and Ukraine, the warm embrace of the Israeli leader provides a strong defense against accusation of anti-Semitism while also strengthening ties with a close U.S. ally.

Netanyahu has also formed a close alliance with Hungarian Prime Minister Viktor Orban, who has lavished praise on Miklos Horthy, Hungary’s World War II-era ruler, who introduced anti-Semitic laws and collaborated with the Nazis. Orban has also employed anti-Semitic tropes against the Jewish Hungarian-American billionaire philanthropist George Soros and backed a state-funded museum that experts say plays down the role of Hungarian collaborators.

Netanyahu also struck a deal with Polish leaders over their country’s controversial Holocaust speech law, which would have criminalized blaming the Polish nation for crimes committed against Jews during World War II.

Israeli Holocaust historians slammed the agreement, which seemed to accept a Polish narrative that they were only victims of the Nazis. Scholars say anti-Semitism was deeply rooted in pre-war Poland and Poles might have either killed or helped Germans kill up to 200,000 Jews.

Still, Netanyahu has invited Orban and Polish Prime Minister Mateusz Morawiecki — who last year equated Polish perpetrators in the Holocaust to supposed “Jewish perpetrators” — to Israel in February for a summit with the leaders of the Czech Republic and Slovakia.

Yair Lapid, leader of the centrist Yesh Atid party and the son of a Holocaust survivor, called on Netanyahu to cancel the meeting, saying one prime minister has “published anti-Semitic content” and another “passed a law desecrating the memory of Holocaust victims.”

In an annual report Sunday, Israel’s Ministry of Diaspora Affairs said 2018 saw a record number of worldwide anti-Semitic attacks, with most carried out by neo-Nazis in Europe and white supremacists.

But at his Cabinet meeting later in the day, Netanyahu singled out “Islamic anti-Semitism and the anti-Semitism of the extreme left, which includes anti-Zionism.”

Israel’s Yad Vashem Holocaust memorial, which hosts all visiting foreign dignitaries, has been thrust into the controversy.

While it says it will never disqualify anyone wishing to visit, Yad Vashem insists it will “forcefully” address any denial or distortion. Yad Vashem said the Lithuanian leader received a comprehensive explanation of the Holocaust, including details about “the murder of Jews of Lithuania by the Nazis and their Lithuanian collaborators.”