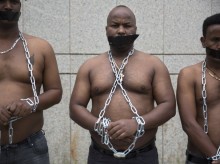 JERUSALEM (AP) — In an abrupt and startling reversal, Israeli Prime Minister Benjamin Netanyahu nixed his own deal Tuesday with the United Nations to resettle tens of thousands of African migrants in Israel and other Western nations, caving in to nationalist critics who have demonized the migrants for taking over poor neighborhoods in Tel Aviv.

The move leaves unresolved one of Israel’s most charged and divisive issues — what to do with the Africans who say they fled for their lives in search of sanctuary in the Jewish state.

The about-face also opened Netanyahu to scathing assaults on his leadership, raising doubts about his ability to make controversial decisions on bigger issues in the future, including how he would respond to a peace plan promised by President Donald Trump.

Netanyahu proudly announced the deal Monday in a nationally televised news conference, saying Israel had agreed to cancel a planned expulsion of tens of thousands of Africans that had been widely condemned both at home and among Jews around the world.

Under the deal, roughly half of the 35,000 migrants living in Israel would be resettled in the West with the rest absorbed in Israel. Netanyahu praised it as a “good agreement” that marked “an important day” for Israel.

But hours later, after heavy criticism among nationalists within his own ruling coalition, he said he was putting the plan on hold. After meeting angry residents of working-class neighborhoods in south Tel Aviv on Tuesday, Netanyahu said he was canceling it outright.

“From time to time there are decisions that have to be reconsidered,” he said. “We will continue to act determinedly to exhaust all our options of removing the infiltrators.”

A coalition of human rights organizations in Israel said the flip-flop proved the government could not be trusted to fulfil any “moral, legal or international commitments.”

Domestic critics said it raised broader questions about whether Netanyahu could carry out any proper decision-making process.

“How will you, as prime minister, handle the Iranian threat? How will you deal with the cost of living?” asked Avi Gabbay, leader of the opposition Labor Party. “Lack of leadership, cowardice, escape from responsibility, incitement, empty slogans, inability to make decisions and zero ability to implement them — this is what we have seen over the past few hours from he who pretends to deal with the real threats and problems of Israel.”

The aborted U.N. deal had looked to avoid the specter of forced deportations to undisclosed African destinations, widely believed to be Rwanda and Uganda, with which Israel said it had reached a secret agreement. Israel had planned to begin the mass deportations on Sunday.

The Hotline for Refugees and Migrants advocacy group said Netanyahu’s initial announcement revealed there was no such agreement. Rather than resolving the migrants’ status, it said they were once again in limbo while the state had no legitimate recourse to deport any of them.

“Of course we will continue our struggle and consider all our legal options until every last asylum-seeker gets the status they deserve,” said Dror Sadot, a spokeswoman for the group.

Rwanda’s minister of state for foreign affairs, Olivier Nduhungirehe, and Ugandan Foreign Affairs Minister Okello Oryem also said no deal had ever been signed with Israel.

While nationalist activists celebrated Netanyahu’s reversal, dozens of migrants and their Israeli supporters protested in Tel Aviv and Jerusalem. Some stripped to the waist, draped themselves with chains and taped their mouths shut at a protest in Tel Aviv. Others waved signs reading, “Human lives are not to play with. Yes to the deal.”

Teklit Michael, a 29-year-old asylum-seeker from Eritrea, said that while he had unanswered questions about the U.N. draft he was at least encouraged about the efforts to address his needs. Now, he said, he was confused and dispirited.

“Not only do we have no security, we also have no one to believe,” he said. “People have no hope and no trust in the state of Israel.”

In Geneva, the U.N. Refugee Agency expressed “disappointment” with Netanyahu’s decision and urged him to reconsider. It noted that the deal had been reached after lengthy negotiations, and reflected a “shared effort” to find a solution that would benefit all parties.

“UNHCR continues to believe that a win-win agreement that would both benefit Israel and people needing asylum is in everyone’s best interest,” it said in a statement.

Nearly all the migrants hail from war-torn Sudan and dictatorial Eritrea. The migrants say they are asylum-seekers fleeing danger and persecution, while Israeli leaders have dismissed them as mere job seekers.

The Africans started arriving in 2005, after neighboring Egypt violently quashed a refugee demonstration and word spread of safety and job opportunities in Israel.

Tens of thousands crossed the porous desert border before Israel completed a barrier in 2012 that stopped the influx. But Israel has struggled with what to do with those already in the country, alternating between plans to jail and deport them and allowing them to work in menial jobs.

Thousands have concentrated in poor neighborhoods in south Tel Aviv, an area that has become known as “Little Africa.” Their presence has sparked tensions with working-class Jewish residents, who have complained of rising crime and pressed the government to take action.

On the other hand, a wide coalition of critics at home and in the Jewish American community had called the government’s deportation plans unethical and a stain on Israel’s image as a refuge for Jewish migrants.

Groups of Israeli doctors, academics, Holocaust survivors, rabbis, poets and pilots had all appealed to halt the plan. Several mass protests against it have taken place in recent months.

As in other recent moves, Netanyahu appears to have been taking his cues from his education minister, Naftali Bennett, leader of the nationalist Jewish Home party.

Bennett and other nationalist allies who dominate Netanyahu’s coalition had harshly criticized the deal because it would allow thousands of Africans to remain in Israel, even though it also called for them to be dispersed throughout the country and for investments to be made in rehabilitating Tel Aviv’s impoverished southern neighborhoods.

Ironically, their victory raised the possibility of leaving the migrants in Israel for even longer while their status is resolved.

Nduhungirehe, Rwanda’s foreign affairs minister, said that while no deal was ever signed with Israel, his country has a “general open policy” toward the migrants, as long as they come “without any form of constraint.”

But Oryem, Uganda’s foreign affairs minister, said his country was not an option.

If any migrants deported from Israel arrive in Uganda, “we will insist that the airlines return them to the country where they came from.”

“We do not have a contract, any understanding, formal or informal, with Israel for them to dump their refugees here,” he said.